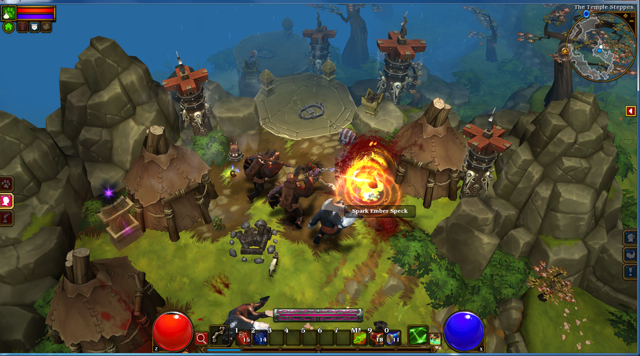 GB: How similar does the end stretch with Torchlight II feel compared to the development of Diablo II?

MS: It does feel similar. In fact, when Flagship went down, part of our decision- making was to step back and go back to what we do well, and what had succeeded for us in the past, and build from that. We did not set out to make a Torchlight I and then a Torchlight II that sort of mirrored a Diablo I and II, it just was the natural progression for the game.

GB: What were the key lessons you learned from the failure of Flagship Studios?

MS: Boy, there’s so many (laughs). I think we made the mistake at Flagship of trying to do too many things and please too many people. The biggest lesson coming out of that was to focus on what you do well, have a very distinct specific idea and pursue it instead of trying to please everybody on the planet.

At Flagship with Hellgate London we had a free-to-play model, we had a subscription model… it was definitely a situation where we were trying to do too many things, too many models wedged into one game. It was a project that required a lot more time and assets than we were able to give it.

Another mistake we made was to have multiple partners for the game, so we had an US and Europe partner and an Asian partner. They had different interests and they also had their own financial issues that were going on, and we had to release the game too early. It needed another 9 months basically of polish and bug fixing and all that sort of stuff.

Coming out of Blizzard you get this sense that if you just work really hard it all comes together and works in the end, and it’s definitely not true. So we learned a lot of lessons from that and were determined to not repeat those. And that’s why we want to keep a small team that has a burn rate that’s rational. You can see our office is not extravagantly decorated in any sense…

MS: Yeah, we spent $50 for holiday decorations. So we just want to make sure that we have a viable and profitable business this time around. And have more fun as well, while we’re doing it. 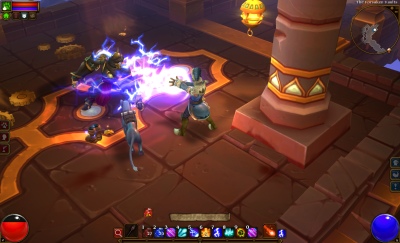 GB: Why do you stick with a $20 price for Torchlight II, even though it’s bigger and has more features than the first one, like co-op multiplayer?

MS: We felt like Torchlight I’s price point was a magic price point for that kind of game and we sold more than we anticipated. So there’s a market for a $20 AAA game. Our idea was: let’s just make games that feel like an AAA game and play like an AAA game, but strip away all the extraneous stuff and the expensive marketing campaigns and all that. Just offer the game for a $20 price point and then we think people will flock to that. They did it for Torchlight I and Torchlight II is so much bigger and so much better that I can’t imagine that people will be disappointed when they pay 20 bucks for it. And what we want most of all are happy customers that tell their friends about the game.

MS: No, I think we want to keep it a simple business model and not split our communities into people who buy extras and people who don’t buy extras. So if we do anything with Torchlight II [past its release], it would be – most likely – an expansion pack. We’d put together another package of stuff and sell that, but not try to nickel and dime with single items or anything like that. Torchlight is something that doesn’t lend itself well to item sales anyway because we give you the development tools with the game, so you can just make any item you want anyway. Selling something to players that they can generate themselves would be tough.

GB: You’re talking about the TorchEd editor that you’re planning to offer as a free download. Why are you offering your creation tools to the community?

MS: We think the development tools are important to be sent out because that’s something that no one else is really doing in this area. People who play action RPGs always think they have better ideas about how it should have been, and they can make that happen then at home, with the development tools. So we decided to go that way instead of making a hyper-secure environment where we can sell items and give certain people advantages. And obviously that’s an economically viable way to do things, because people are making a lot of money with that, but that’s not what we do.

GB: Any ongoing bets on what Runic’s next project is going to be?

MS: Well, there’s 31 people here and we’ve got 31 ideas on what we should do next. We’re working on some ideas and honing them, but what we really want to do is release Torchlight II first. I’m sure we’ll have to do a patch or two, we’ll do a Mac port… and then we can sit back and see what the world looks like. Did the game blow up like crazy? Maybe we want to really consider doing an expansion pack then. Or are people done with this sort of game and we’ve got to move on? Then we’ll move on to something different. We’ll also consider what we want as game makers to feel creatively satisfied and we’ll come up with a decision. Right now it’s really up in the air.

GB: That action RPG MMO idea is still floating around?

MS: Absolutely. The thing about an MMO is that it’s a really serious long-term commitment because you have to grow the community and service it indefinitely. So we have to make sure that that’s what we want to commit to, because it would probably be the last thing we do for a long time… I’m not getting any younger either (laughs). 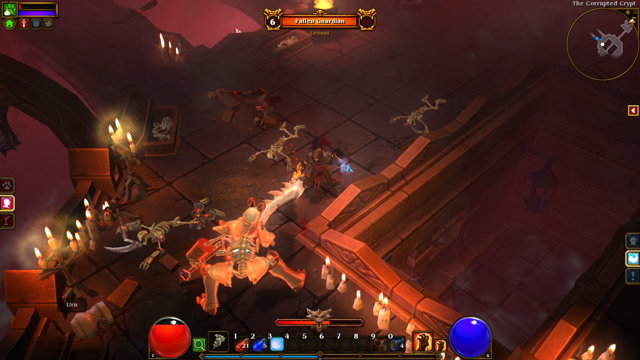