Diablo III might seem like an odd fit for the Switch. It started life in 2012 as an action role-playing game for PC. Diablo III is filled with demons, evil, and references to Hell. It’s not exactly Mario. Yet Diablo III is actually a fantastic fit for Nintendo’s portable/home console hybrid.

This is the Eternal Collection of Diablo III, which includes all past content, including the Reaper of Souls expansion and the Necromancer class. It comes out for Switch on November 2. Diablo III ports for PlayStation 4 and Xbox One (and PlayStation 3 and Xbox 360 before that) surprised me by showing just how much fun the game could be with a controller.

Now the Switch version shows me that Diablo is a perfect fit for portable gaming. 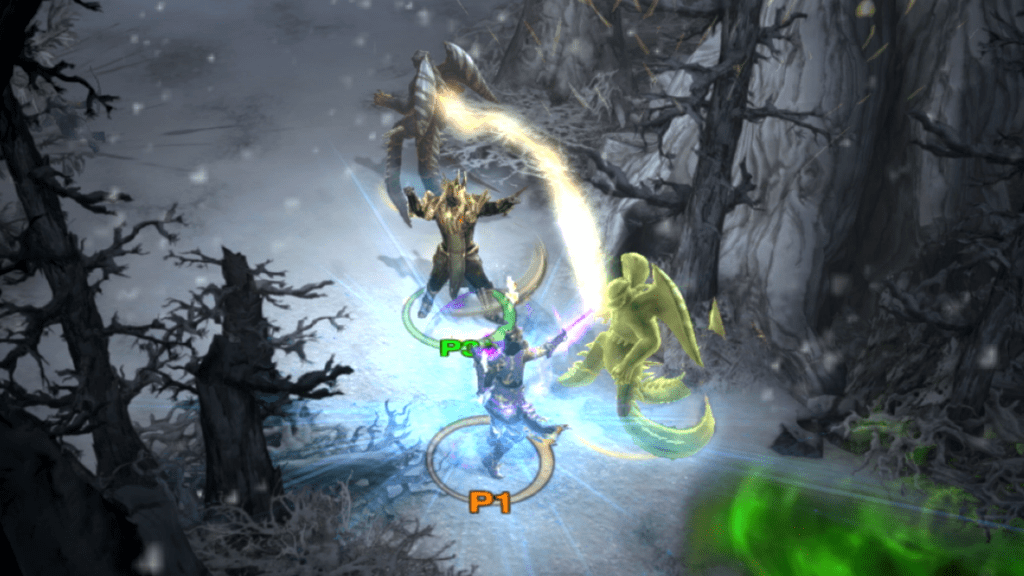 Diablo III is all about killing monsters and collecting loot, and you’ll find plenty of both. Diablo III is fast-paced. You’re almost always fighting, and you’re constantly picking up new items and gaining levels. This is fun and satisfying, since you’re always getting stronger. And Diablo III has a lot of difficulty options, and making things harder grants better rewards. You become more powerful, but you can still have a challenge.

You have seven different classes to pick from, and each of them has a ton of abilities. Even two people playing the same class can have different playstyles based on the spells they choose to equip. A Necromancer could focus on a build that creates corpses and uses them as bombs, or they can deal most of their damage by pulsating out rings blood that also sap some of their health.

Even when you’ve spent a ton of time with one class, it’s worth starting over with one of the six other ones. 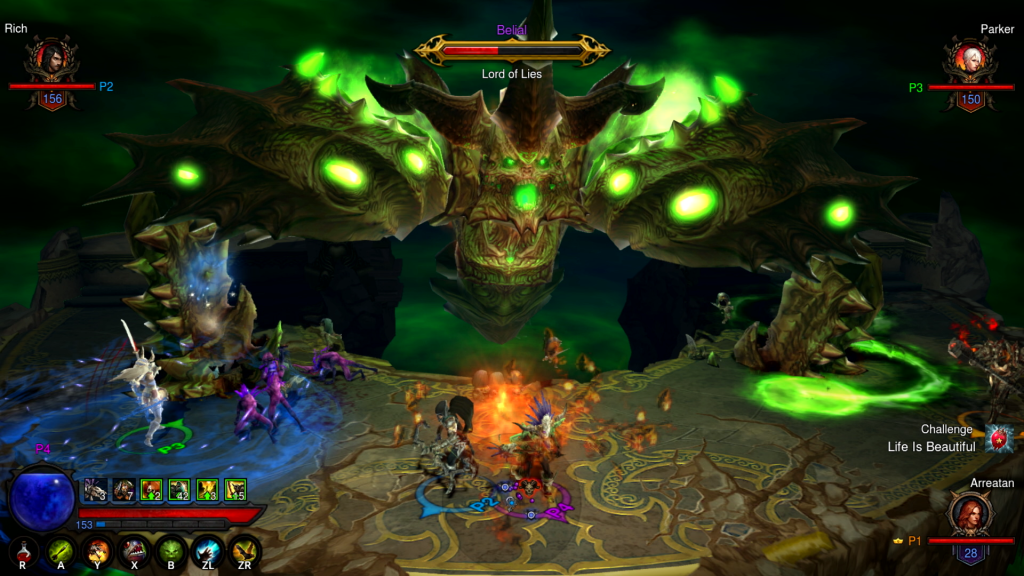 Above: Get that loot.

Great on the go

Diablo III works great as a portable game. It’s easy to play in short bursts. You can just spend half an hour clearing a dungeon or completing some missions.

It also runs fantastically in Switch’s portable mode. I never noticed any framerate drops or any other noticeable performance issues. Above: They look ready to fight evil and stuff.

The other console versions showed how much fun Diablo III can be as a couch co-op game. That’s true for the Switch version, but you can also play local multiplayer. If you have friends with their own consoles and a copy of the game, this is an even more convenient way to play together, as you don’t have to share the same screen. Above: Things can get hectic.

Diablo III’s campaign features a lame story and trope-filled characters. It’s forgettable and dull, and you’ll have little reason to want to go through it more than once.

You don’t have to play through the story at all. Adventure Mode is unlocked at the start, and it gets you straight into the action. It gives you a series of missions across the game’s worlds and gives you access Rifts, random dungeons filled with monsters. This content is repeatable and rewarding, and it’s better to play this way than through the campaign. Diablo III on the Switch is my new favorite way to play the game. If you ignore the lame campaign, this is a engaging and rewarding action RPG experience that you can play for minutes or hours. And you’ll enjoy it alone or with friends.

If you’ve ever been a fan of Diablo III and own the Switch, you’ll have a great time with this port. If you’re a Switch owner that’s into action RPGs but haven’t tried Diablo III yet, this is the perfect excuse to give the demon-slaying adventure a go.

Diablo: Eternal Collection comes out for Switch on November 2. Blizzard sent GamesBeat a code for this review.