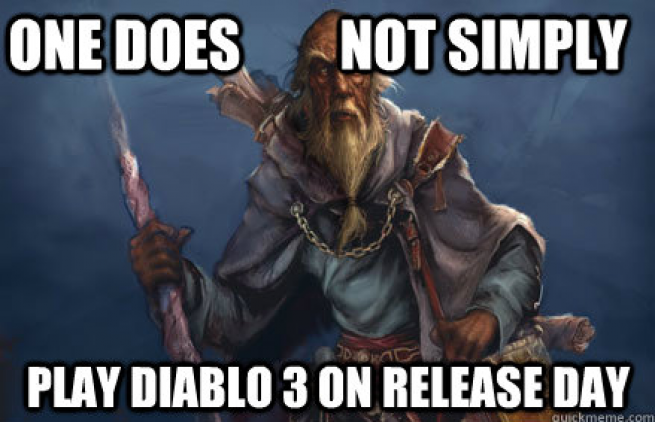 The long-awaited Diablo III from Blizzard Entertainment has suffered severe technical issues upon its official launch at 12:01 a.m. earlier this morning. Thousands of angry fans took their favorite forums or social media networks to complain about the inability to connect, usually due to the now-infamous Error 37, which simply states that the game’s servers are too busy and to try again later. Now, the servers aren’t busy, they’re not even up anymore.

Starting at 10:30 a.m. PST, Blizzard announced the North American servers were going down for “emergency maintenance,” with an estimated reactivation time of one hour. That hour came and went, and then the Blizzard tech support Twitter account announced the maintenance had been extended to approximately 1:30 p.m. PST.

The downtime was so long that I actually had time to write a review of my Diablo III adventure. After over two hours of trying to connect, I finally got in and progressed my Wizard to level 11. GamesBeat intern Jasmine Rea was not so lucky, and like countless others, has not been able to login to the game once for the 12 hours it has been live.

Diablo III’s catastrophically poor launch  will undoubtedly have resounding consequences for Blizzard Entertainment. The beloved game studio is already the butt of many jokes and internet memes, but more importantly the company’s controversial reliance on always-connected digital rights management (DRM) — which requires customers to have an active online connection and be logged in to Blizzard’s Battle.net servers — is now being questioned.

Diablo III is certainly not the first game to be afflicted by launch day server problems (literally every Battlefield game ever has also had massive outages), but that’s not really an excuse so much as it should be a wake-up call to developers and publishers. This is a startling trend that needs to end. And when that product has been thoroughly beta-tested, is released by one of the most profitable game companies in the world, and is Amazon.com’s most preordered PC title of all time, there’s a bare minimum expectation that it will at least work. If you have extra servers that can be flipped on, don’t wait until you have thousands of angry people telling you that you can’t play your game.

For future updates on Diablo III’s launch woes and server maintenance, keep your eye on @BlizzardCS.

Update 1: Blizzard just tweeted the following: “We’re testing and implementing multiple fixes for the current #D3 service issues. An update will be provided in approximately 30 minutes.”

In the meantime, here are some choice comments from fans around the Web:

“Anybody who ever played WoW knows that when Blizzard says something will be up at a certain time, that means you might as well just go do something else for the rest of the day because it’ll probably be hours after that.” — Splinshints on Fark

“Omg you guys seriously need to figure out these server problems you had a stress test weekend for a reason.” — Lendle Nguyen on Twitter

Update 2 (8:15pm PST): Persistent players may have noticed that the servers were temporarily available, only to seemingly go offline again a few moments again. A new error message #75 states that there is a Battle.net outage right now, and to please try again later.

A number of players are also reporting that any achievements they earned before the emergency maintenance have now been wiped from their account. Blizzard has stated the issue is being looked into.

Update 3 (10:15pm PST): Blizzard is estimating that North American servers will be turned back on at 11:45pm PST.