Diablo III came out in 2012. Blizzard is now adding a new character class can keep the game running and earn it some money without having to release a full-on expansion for the aging game.

The Rise of the Necromancer pack came out on June 27 for Diablo III on PlayStation 4, Xbox One, and PC. For $15, players can unlock the new class, which Blizzard based off of one of the character options from Diablo II. This is a new way for the studio to introduce content to Diablo III. Before, the studio would release new classes as a part of an expansion that would come with other new features and more story-based content.

But expansions are expensive to make and take a lot of time to develop. Diablo III already had one, Reaper of Souls, in 2014. That introduced the Crusader class along with a new story act. Now, Blizzard is hoping that players will be able to spend less money for less content. If they do, Blizzard can continue supporting Diablo III with similar features for years and not have to worry about working on a Diablo IV.

But after spending some time with the necromancer, I think Blizzard might want to get going on that Diablo IV thing sooner rather than later. First off, the necromancer is a lot of fun. It’s similar to the game’s other magic-based classes, the Witch Doctor and Wizard, but differentiates himself with death and summoning-based abilities. Corpse Explosion is the character’s best ability. Every enemy that dies leaves behind a carcass, which you can then blow up to damage other foes. This can start a cycle of Corpse Explosions that can take down dozens of enemies.

But the necromancer isn’t a nostalgia act. While Blizzard has based many of its abilities (including Corpse Explosion) on the Diablo II version of the character, this necromancer has a new design that thrives in Diablo III’s faster-paced world.

Summoning is still a core of the class. You can resurrect ghost mages and skeleton knights to fight at your side. But unlike in Diablo II, these minions don’t feel passive. Each one comes with an ability you can trigger with a button press. You can target an enemy and have all of your skeleton knights jump at them, or you order your golem to collapse into a bunch of corpses that you can then use as fuel for your Corpse Explosions. 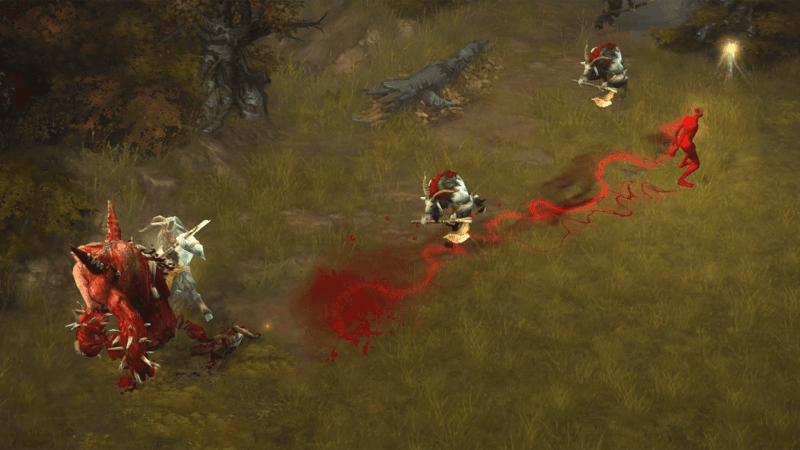 Above: The necromancer loves blood and corpses.

But it’s in an old game

I like the necromancer, but I wish I had a different game to play him in. Starting up Diablo III’s campaign from the beginning felt like a chore. I’ve played through this story several times, and having a few unique new lines from the necromancer doesn’t make it fresh enough to warrant another playthrough. Yes, replaying Diablo to unlock more loot is core to the experience, but we all have our limits. I’ve reached mine, and a new class isn’t enough to make the experience exciting again.

Diablo III’s campaign wasn’t all that great to begin with. It’s a generic story filled with lazy dialogue, Saturday morning cartoon villains, and obvious plot twists. The Reaper of Souls expansion introduced a new act with a better plot, but you need to finish the first four chapters of the game to get to it.

Thankfully, you don’t actually need to play through the campaign to level a new character. After a few missions, I switched over to Diablo III’s adventure mode. This does away with most story elements and instead sends you on random quests. It gets you into the action faster and earns you better rewards. If you like Diablo III just for the hack-‘n’-slash gameplay, this is the way to go.

But even that can feel tiring. It’s a fun grind, but it’s still a grind. And it still left questions unanswered that I would have liked to see explored in a new act. Leveling up and getting more gear is a nice motivation, but I need something more to keep me going. There’s no “final boss” in adventure mode. You just go forever. 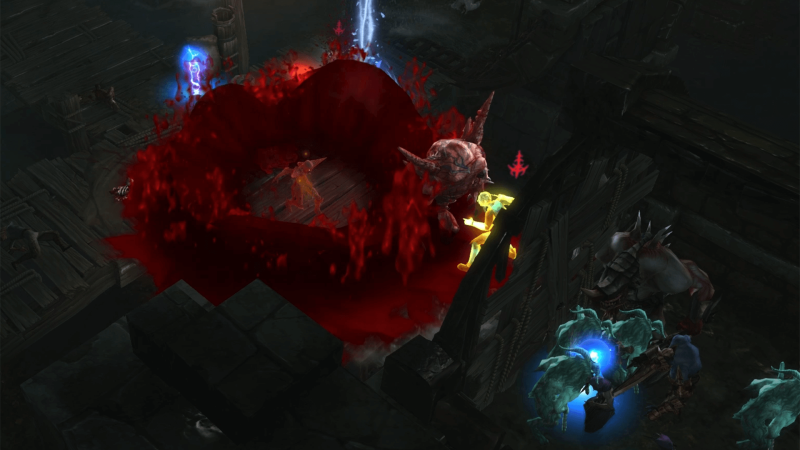 Above: Blood. So much blood.

The future of Diablo

The necromancer is a great class with fun and unique abilities, but it’s not enough to keep Diablo III relevant for me. If you still enjoy playing this game regularly, getting this new class is an easy purchase. You could enjoy it if you’re into things like the leaderboard-based competitive seasons or hardcore mode, where you lose your character if it dies (both things I don’t have much interest in).

Diablo is going to need to push forward if it really wants to evolve from an expansion model to a series of smaller content drops. Despite how much Blizzard has improved Diablo III over the years, it still has some noticeable flaws. Notably, its campaign is dull, and the progression system is uninspired (instead of picking skills from a tree, you just unlock everything in a set order as you level up.

If Blizzard wants Diablo to adapt to the games-as-service format, it needs to make a new game designed with that structure in mind. Blizzard needs a Diablo IV that it can create new classes and story acts for years to come. Because right now, the necromancer can’t keep Diablo III away from death’s door. It’ll make the game’s most hardcore players happy, but normal fans will quickly lose interest.