Blizzard is releasing the Necromancer as a new class for its action role-playing game Diablo III later this year on PlayStation 4, Xbox One, and PC. New characters used to come in large content drops via expansions, but the Necromancer will be paid downloadable content. But it could still bring players back to Diablo III, which has sold over 30 million copies since launching in 2012.

The Necromancer was previously a character in Diablo II famous for controlling his own army of undead minions and doing fun things with corpses like making them explode. But I got to play with a build of the Diablo III Necromancer at the Game Developers Conference earlier this month in San Francisco that focused more on blood magic than undead manipulation. I was able to shoot out a Blood Nova from my body, doing a large amount of damage to enemies around me while sacrificing my own health. But I was able to restore my life with other abilities, including one that would siphon health from corpses and another that gave me some life from my giant minion, a Blood Golem.

I also got to play as the female version of the Necromancer. In Diablo II, the Necromancer was only male, but Diablo III provides male and female options for each class.

I had a chance to chat with Diablo III’s production director John Lagrave and lead visual effect artist Julian Love at GDC. We talked about how Blizzard designed the new Necromancer, how it’s different from the one in Diablo II, and how they’re making the pet-based class feel fun to play. 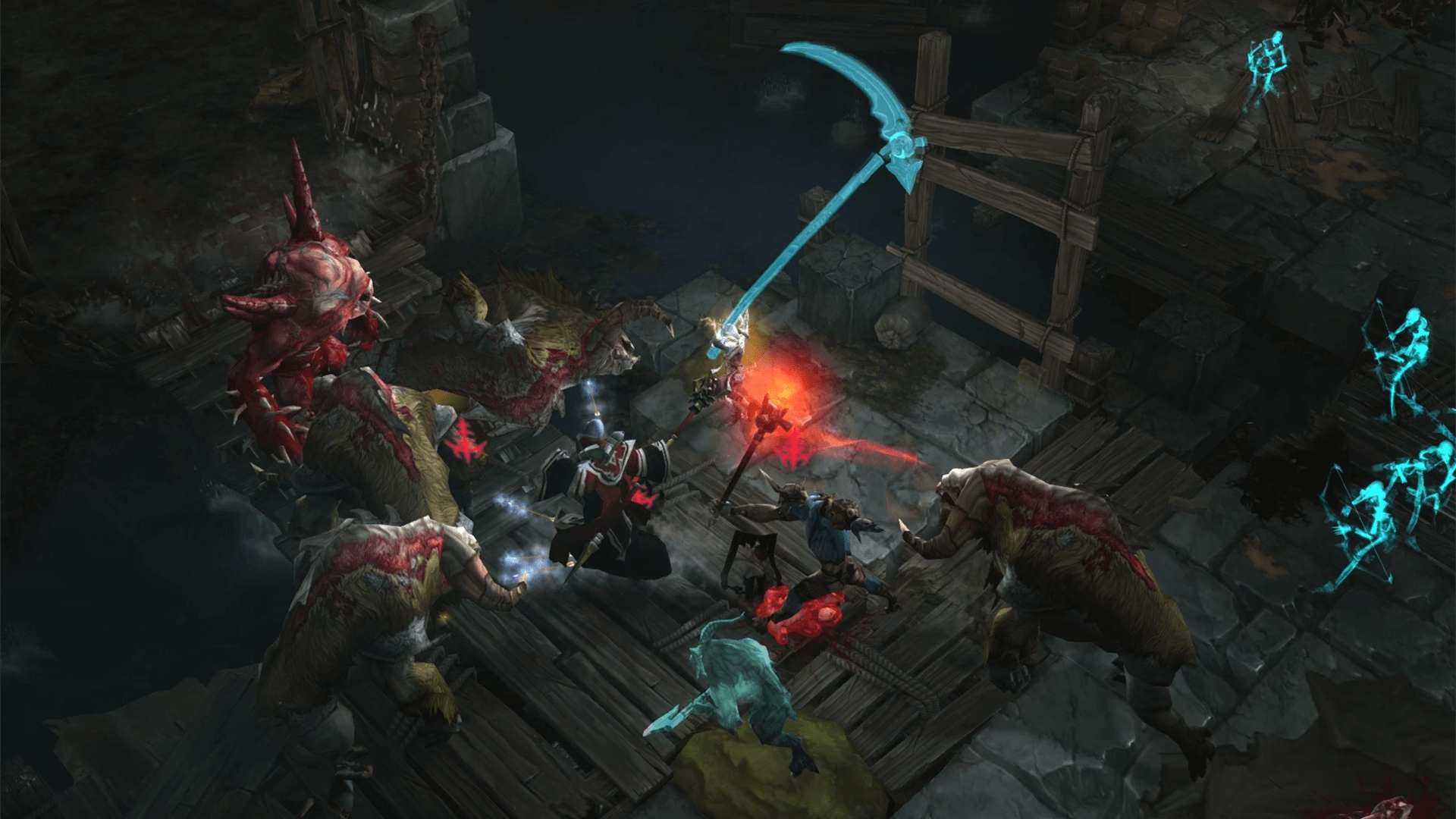 GamesBeat: The Necromancer is downloadable content, instead of coming as part of an expansion. Will there be any more story content coming out for Diablo III?

John Lagrave: We’re integrating the Necromancer into the storyline for Diablo III. It’s a full experience. When you fire up a brand new Necromancer, you can start off story mode and we’ve written that story in for you. As you progress through the game, you’ll be able to follow the storyline for Reaper. We’re adding in the cinematic aspect as well. Just as we did for each of the other classes, you’ll have that as well for the Necromancer.

GamesBeat: Was there much of an internal contest over who that new character would be?

Julian Love: There was no content. [Laughs] Literally no contest. There wasn’t even, hey — the way it came about, we occasionally do what we call game jams, setting aside a few days to let people on the team just chase a dream. If you can get somewhere in a couple days and it bubbles up, then maybe that’s something we should be doing.

Somebody had the dream of, hey, maybe we can do the Necromancer, and in a couple of days threw together — by kit-bashing parts, throwing some things together, they came up with something and it got everybody excited. Not that we weren’t already excited about the notion of doing Necromancer as a team, but there’s something about getting it in the game and getting it over that hump, seeing the promise of it, that just lit it on fire.

Lagrave: It’s that catalyst. It was a strong enough vision that we were like, oh, yeah, that resonated with me. I want that. That sells it. That works. It was a great game jam. 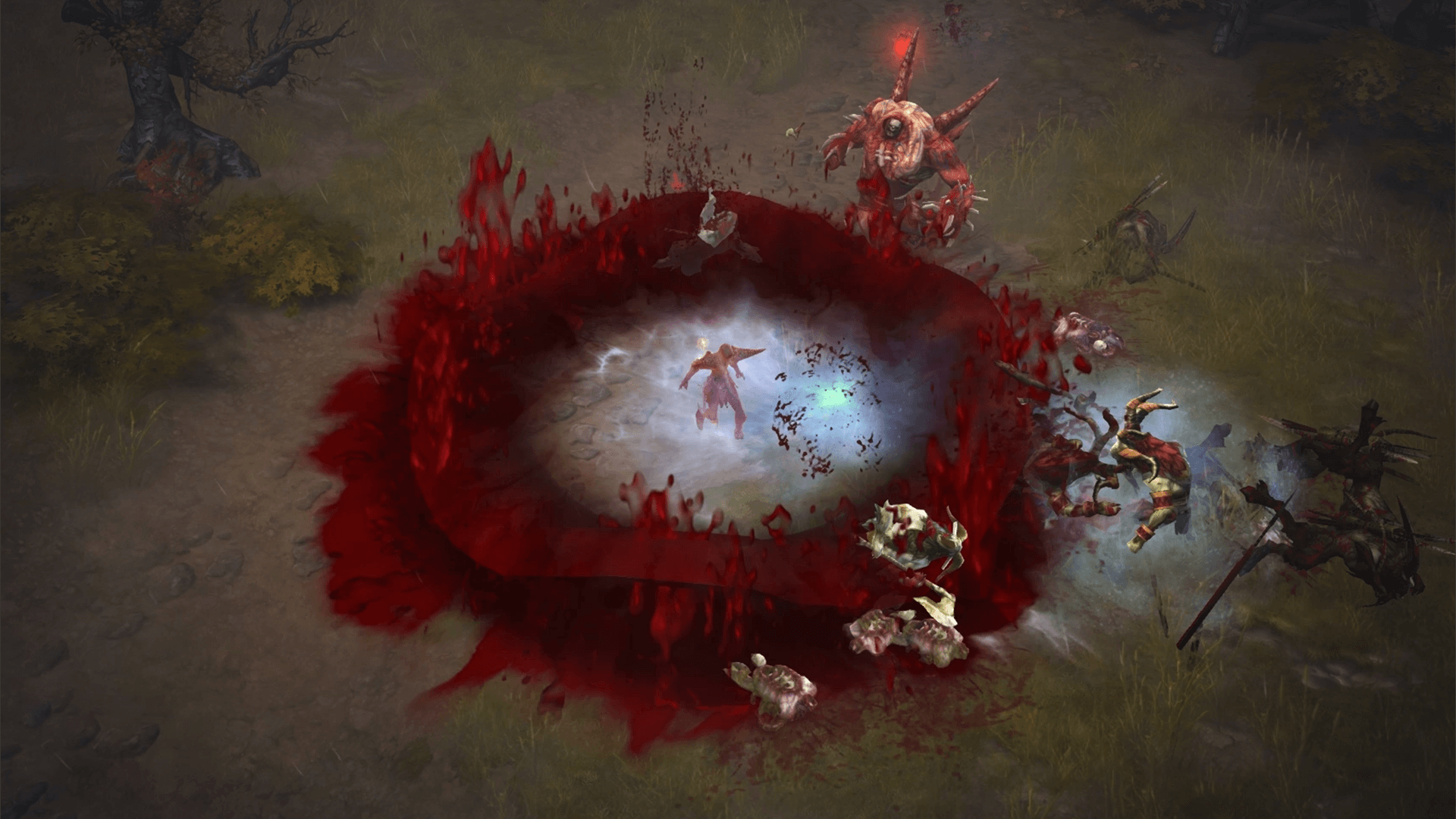 Above: So much blood.

GamesBeat: Are there any worries about the character being too similar to the Witch Doctor?

Love: That’s a concern right out the gate, but we can also see a lot of promise in terms of taking it in a different direction, pretty clearly. If you think back to the original Necromancer, he had a different resource mechanic with corpses on the ground. That was one of the things in that game jam example that stood out to us. Hey, this was really cool. If we really jump on that, we could take it in a different direction. And then what followed right on that was, hey, what if we could command the pets? We constantly got requests about getting a class where you could command the pets. Is there a way we could get that feel out of a class? Okay, well, we quickly had a solution for that.

Next thing you know we’re doing blood. That’s a big thing now. When you add all that stuff up together, you get a class that has a different kind of diversity, different kinds of play styles represented. Commanding those pets around the battlefield. Choosing whether you want to exchange blood. Getting up close and personal. It’s fair to say that the build you played today, there’s nothing like that on the witch doctor kit. What emerges is — even though he’s a pet class, it’s a whole range of play styles, some of which are very divergent from what the witch doctor does.

Lagrave: To touch on that, there’s a space where the Witch is, and then you have the visual, thematic different aspect to it. It looks different. What we showed off with the blood, that’s strikingly different from what you see with the Witch Doctor. It doesn’t feel the same. When you play that, look at that, experience that, it’s way different. 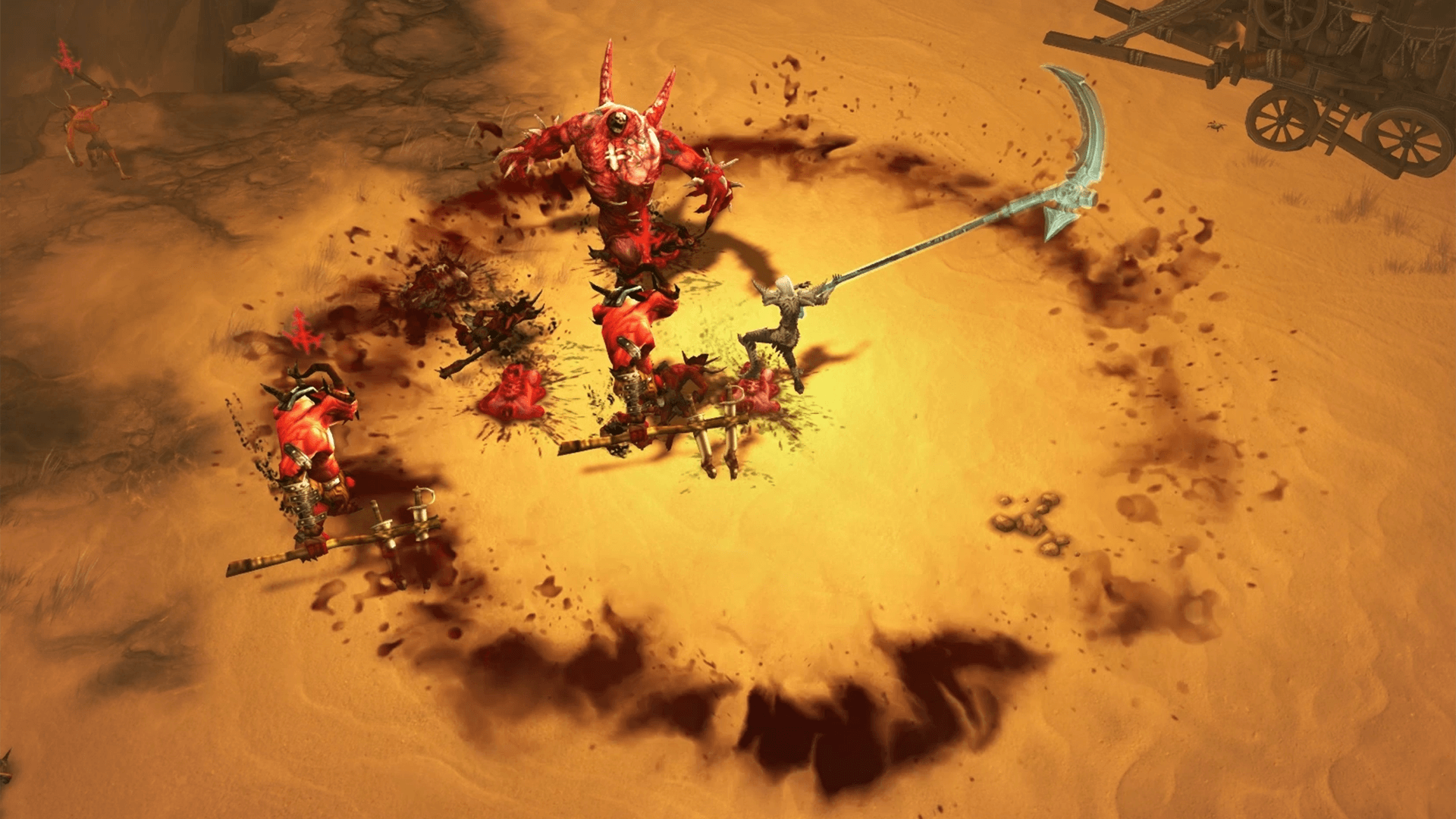 Above: That’s a really long scythe.

GamesBeat: The Necromancer was first in Diablo II. With their addition to Diablo III, are you trying to do something new or nostalgic?

Lagrave: A little of both. I think Julian will probably touch on the newer stuff. But when we thought about how cool the class was, and we thought about this anniversary time to celebrate Diablo, what was — let’s look at the fond things and remember those aspects of what Necromancer was to us, and let’s re-imagine those. Let’s move those forward and make that engaging. But then there’s the notion of, well, what more do we want to add to the class? How do we improve on it?

Classes are just bigger in Diablo III than they were in Diablo II. There’s way more content associated with a class. Not just on the story side, but even on the skills and the itemization side. There’s just a lot more content. That’s an opportunity to grow the class and take it in some different directions, or explore some things that were hinted at. I think the blood theme is hinted at in Diablo II, with the blood golem, but it seemed like a really awesome opportunity to go farther with it.

Lagrave: Your point about pacing is important. While Diablo II was much faster-paced than Diablo I, Diablo III is an even further step. You’re slaughtering a lot of monsters at a faster clip. If we had kept that same pace in Diablo II and said, oh, it’ll be this direct homage, people would end up being frustrated. It wouldn’t be as satisfying. It doesn’t feel like Diablo III. It’s a faster-paced game and we need to keep that in mind when we’re dealing with the necro. 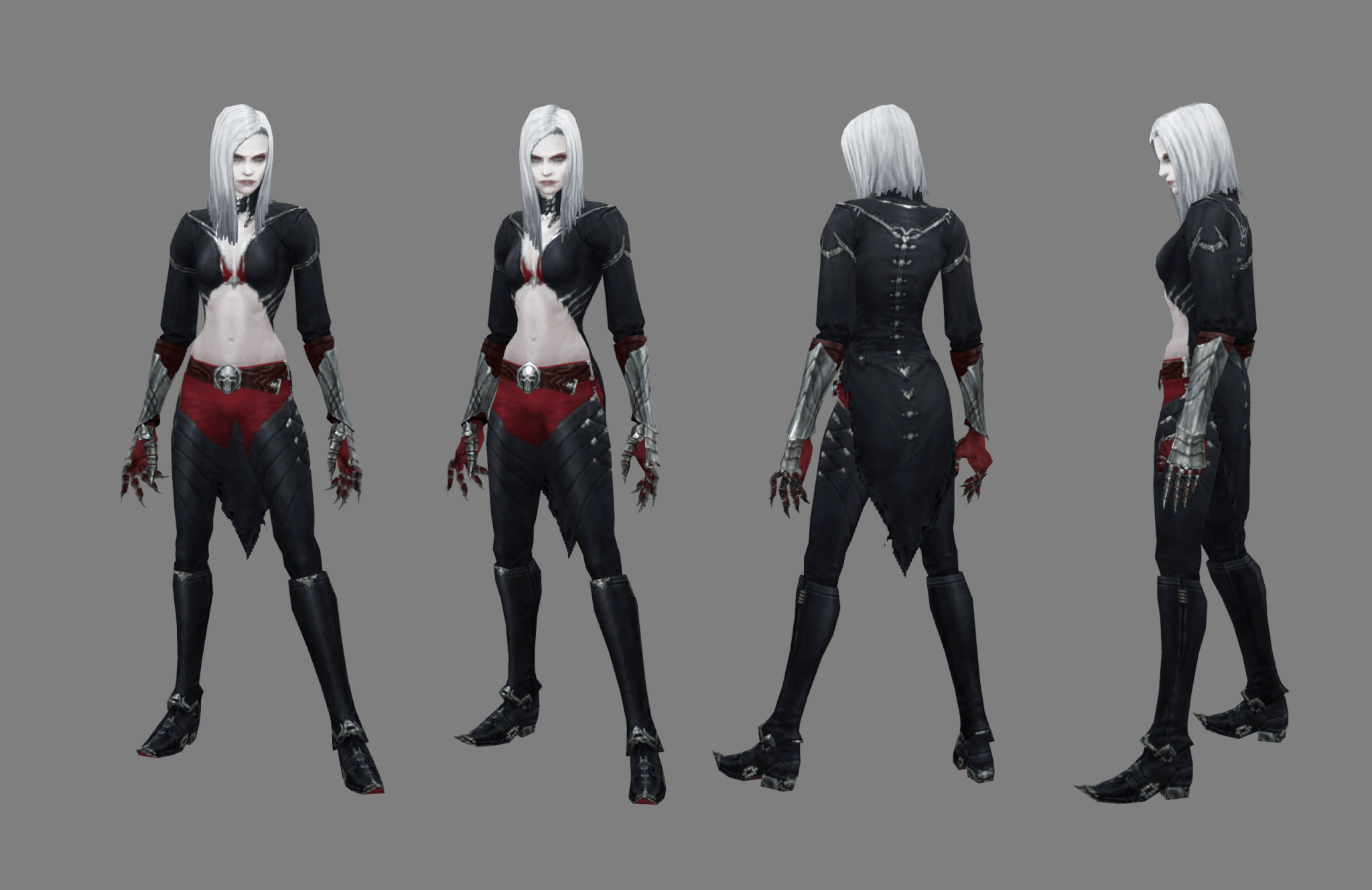 Above: The female Necromancer.

Lagrave: They took one of the notions — “rock star of the dead” is one way to phrase it. It’s that goth look. They definitely based it on those ideas. We looked at visual markers that were iconic for that. I know that for the male, they were looking at basically Iggy Pop and saying, what’s this gaunt-looking dude that could represent that look? When you look at her, she’s striking, striking features. She’s a trim individual. They definitely went to that look.

GamesBeat: Diablo III is interesting because it’s in this era where Blizzard games are switching over to the games-as-a-service model. It’s not just releasing the product, releasing the expansion, and then moving on to the next thing. Was Diablo a harder game to adapt to that model?

Love: Right up to the point where Diablo III was beginning to get started? When I got to Blizzard North, my first thing was, I’m gonna get started on a new thing! And they said, well, we’re still working on Patch 112. You’re the new guy. Could you play the uber-bosses? I played them and I said, hey, the way you’re testing them isn’t quite right, could you download my barbarian with dual-wielding lightsabers? I completely decimated uber-Diablo in 30 seconds and sent the whole thing back to the drawing board. So that’s like, okay, that’s kind of how it is? The idea of supporting the games is just a bedrock requirement. It’s what we do.

Lagrave: We love the games. We really do. I play a lot of Diablo. All of our games get that treatment. We literally just got a bunch of our games running on Win 10, because we want to make sure that you’re able to play them. We do that with all the other games as well. They’re getting patched, because we’re not satisfied with it, or there’s an issue with stability, or there’s some improvement that we want to drive through.

It’s maybe more of a thing for the industry, which is great. It’s great to see that other games are going to get that support. Not to toot our own horn too much. But we do that. That’s what Blizzard is known for. We’ll keep patching the games as long as you’re interested in playing them.