Diablo: Immortal was one of Blizzard Entertainment’s biggest announcements at its BlizzCon event today, and one vocal contingent of fans are not thrilled. While the publisher had said that people should not expect a Diablo IV, many were still disappointed to learn about this mobile-only offshoot of the Diablo series. Blizzard addressed some of that skepticism during a question-and-answer session, but the backlash is only just getting started.

On forums, in YouTube comments, and in Twitch chats, fans are finding more reasons to justify their rage. That includes the claim that Blizzard and its development partner, NetEase, took an existing game and slapped Diablo assets on top of it. That game is NetEase’s previous action role-playing game Crusaders of Light.

I’ve reached out to Blizzard and NetEase to ask about the relationship between Diablo: Immortal and other NetEase gamers. But Blizzard provided the following statement to USGamer.

“Blizzard, in partnership with NetEase, has built Diablo Immortal from the ground up for iOS/Android.”

Fans are basing the reskin claim on just a few things. For example, the button placement in Crusaders of Light is similar to the one in Diablo: Immortal. And characters in each game both have faces. …

Of course, NetEase is a Chinese company, and that country’s reputation for bootlegs could play into the fan perception as well.

I haven’t played Diablo: Immortal, so I don’t know how it compares to Crusaders of Light. But many fans already seem convinced that this is the case.

“It [looks like a reskin] because it is,” Reddit poster Whitw0rth123 wrote on the Diablo subreddit. “UI is 100 percent the same, and some skills they showcased even look simular [sic] to skills in Crusaders of light [sic].”

The onscreen controls are what most fans are latching onto. And that’s because it’s the only thing that really looks like a direct copy. But that reasoning is flawed. Think about it. Blizzard is working with NetEase, who has experience making these kinds of games. Doesn’t it make sense that the two companies decided to use similar controls because NetEase knows it works? This seems like it’s the result of mobile game best practices.

Look at the rest of the UI beyond the controls. Nothing else looks all that similar. Many of the elements are even in different places. 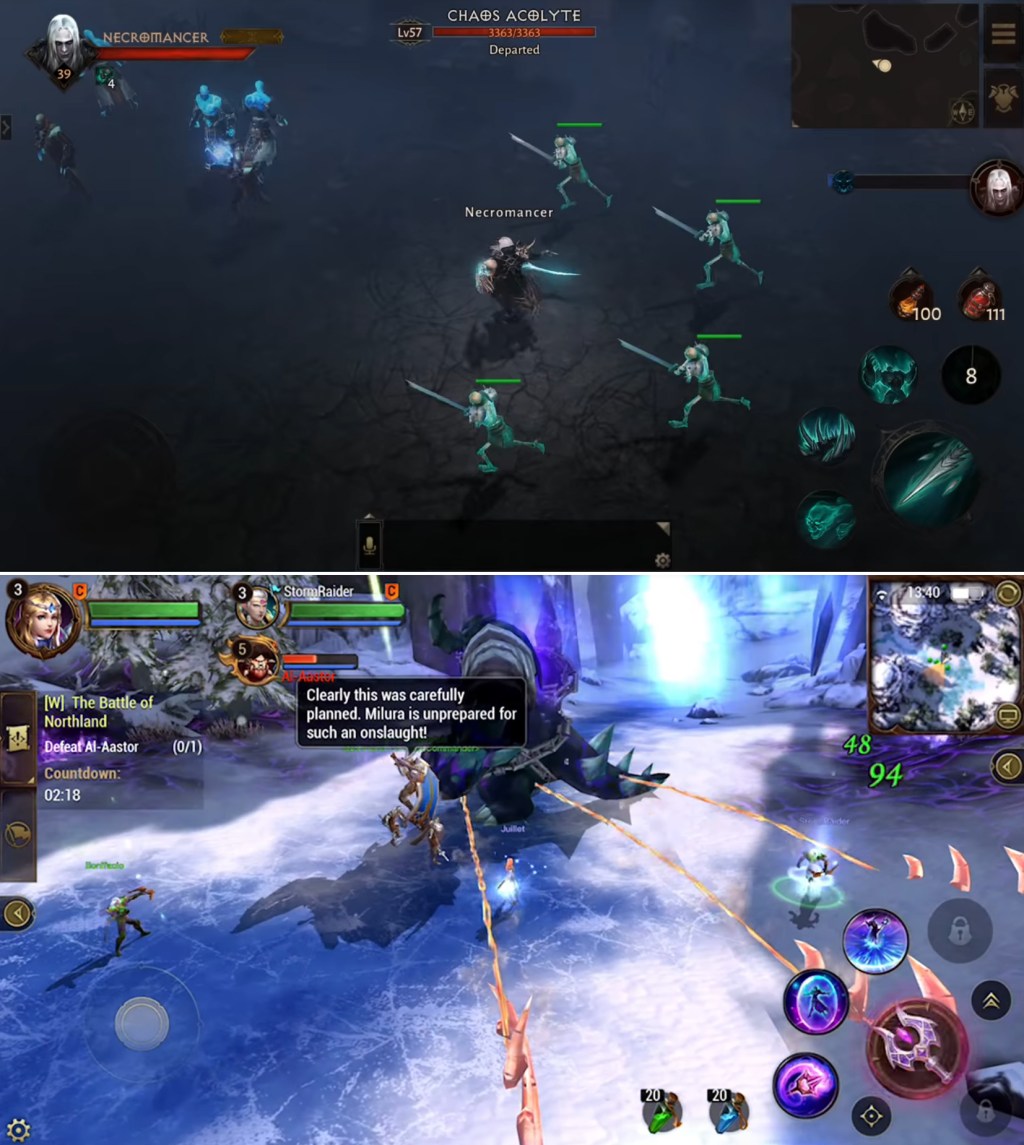 Above: Diablo: Immortal (top) looks a lot like Crusaders of Light … which is trying to look like Diablo.

And even some thinks it doesn’t looks like Crusaders of Light … and something more like a different game called Endless of God. And that discrepancy is the point. People think that Diablo: Immortal looks like games that are trying to look like Diablo games.

Even if it is a reskin, so what?

But let’s say that Diablo: Immortal is a reskin. I don’t know why that matters. Either the game is good or it’s bad. Its quality has nothing to do with whether or not Blizzard slapped its characters and lore onto someone else’s gameplay.

If Blizzard did take this shortcut, which is something that is common on mobile, surely we can still judge the results as we would any other Blizzard release. If the game is lacking in comparison to Diablo II or Diablo III or Hearthstone, we can all complain about that. And we could complain regardless of the details of its development.

But if Blizzard and NetEase do the work to make a reskin that also has refined controls, progression, and action along with great characters and storytelling, then once again — who cares?