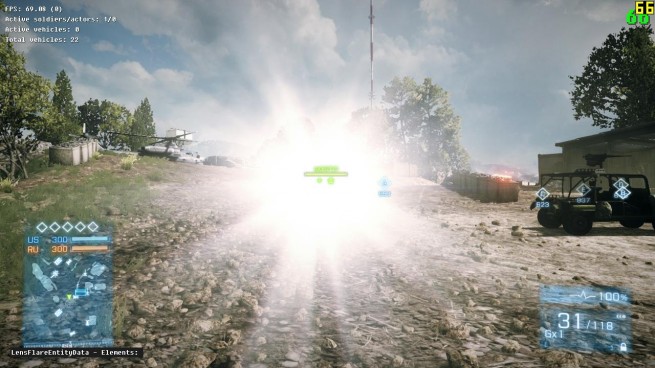 We blasted Battlefield 3 when it was released last October, not only for having drastically unreliable server issues, but also for its overall sense of brokeness and unbalanced gameplay. Now, four months after its release, developer DICE has revealed a massive list of upcoming changes.

Some of these changes arguably could have been avoided if EA hadn’t been in such a rush to beat Modern Warfare 3 to market. Some of these are directly from user feedback, and it’s admirable to see DICE throwing such heavy post-release support behind the game. Better late than never, for those who still play it.

The general feedback seems to indicate that players are mostly happy with the changes, but not all. One of the biggest complaints aimed at Battlefield 3 was the inability to exit a server between matches, and that remains unaltered.

M27 IAR: No change. The M27 is a heavier version of the M416, giving it good allaround performance though it has worse performance on the move.

RPK74M: Reduced the initial recoil and vertical recoil. The RPK74M is a more stable firing platform than the comparable M27, though it lacks the M27’s higher rate of fire.

M249: Added an initial recoil. The M249 is the fastest firing belt fed LMG, giving it superior suppressive and damage abilities. The initial recoil makes it a bit harder to run and gun, while making little overall impact on performance.

Type88: Slightly increased the initial recoil, reduced muzzle drift. The Type88 fires the slowest of the medium caliber LMGs, though what it lacks in rate of fire it makes up for in controllability.

PKP: Reduced recoil but added a slight initial recoil, increased damage at max range. The Pecheneg has a heavy vertical recoil with a hard hitting round and little drift, this makes it excellent at sustained fire.

M60: Reduced the initial recoil, increased damage at all ranges. The M60 has a very low rate of fire that makes it the most controllable with the powerful 7.62x51mm round.

M240B: Added an initial recoil, increased damage at all ranges. The fastest firing medium MG, the M240 has a substantial muzzle kick and drift that makes all that power difficult to control.

QBB95: Reduced the total recoil but increased muzzle drift and initial recoil. The QBB95 should now kick harder but settle into full auto fire better, combined with the bullpup hip fire bonus this makes the QBB95 a highly mobile LMG.

MG36: Added an initial recoil. The MG36 fires at a fast 750rpm and makes a nice middle ground between the controllability of a clip LMG and the sustained firepower of a belt fed LMG.

DAO12: Reduced the total pellets fired from 12 to 9. The DAO12 has a high magazine capacity with a slow reload that makes it a solid all around shotgun.

M1014: Increased the rate of fire from 200 max to 210 max. Reduced the total pellets fired from 12 to 9. The M1014 was underperforming compared to the USAS12 and 870, it should now be more viable in CQB thanks to a higher rate of fire.
S12k: Increased extended mag from 8 rounds to 10 rounds. Reduced the total pellets fired from 12 to 9. The S12k larger extended magazine but slower rate of fire should make it stand out against the M1014, while the DAO12 has a higher capacity over all, but a slowe reload.

MK3A1: Increased magazine capacity to 8 and 12 for normal and extended mag respectively. Reduced the total pellets fired from 12 to 9. The MK3A1 has a lower ROF than the USAS12, giving it slightly more ammo makes this an edge vs the USAS.

USAS12: Increased the initial recoil. Reduced the total pellets fired from 12 to 9. The USAS 12 has a higher ROF than other shotguns, this recoil change better balances that advantage and the pellets balance its damage output.

M4A1: No Change. Wellrounded carbine, with good rate of fire and controllable recoil.

AKS74U: Reduced initial recoil and vertical recoil. The AKS74u’s low rate of fire is paired with great controllability. The overall increase in sustained fire control should help this carbine stand out, while the first kick gives it character.

SG553: Reduced initial recoil and vertical recoil. The SG553 is a lower rate of fire carbine with greater controllability than the G36C. The change to initial recoil should better highlight this difference.

A91: No Change. The A91’s high rate of fire and bullpup from the hip accuracy is offset by a poor controllability on full auto.

G36C: Reduced initial recoil. The G36C is a wellrounded carbine, with a medium rate of fire and a medium recoil. The 2 round burst mode gives this weapon an edge at midrange.

SCARH: Increased damage at maximum range and increased max range. The SCARH fires a heavier round than all other carbines, giving it better stopping power at range at the cost of a low fire rate that penalizes it in CQB.

G53: Reduced recoil and drift, recoil settle times now similar to other carbines. The HK53 is a short carbine with a lot of initial kick but a stable recoil pattern and a medium rate of fire. The changes give it more character compared to the G36.

QBZ95B: Reduced muzzle sway, recoil settle times now similar to other carbines. A bullpup like the A91, the QBZ95B is steady on the move with a lower rate of fire for controllable shots at longer range. The built in foregrip is now properly reflected in the weapon’s stats.

M16A3: No Change. The M16 (both A3 and A4) provide a wellrounded stable firing platform with a high rate of fire that is relatively controllable.

M416: No change. The M416 is the middle ground AR, blending a medium recoil and rate of fire.

AEK971: Increased initial recoil, reduced aimed accuracy slightly. The AEK has a very high rate of fire, and also a large muzzle drift that makes control difficult. The low initial recoil allowed a player to kill before the weapon’s weaknesses kicked in while the reduced accuracy highlights its close range role.

F2000: Reduced vertical recoil, increased zoomed accuracy slightly. As a bullpup, the F2000 has a bonus to accuracy on the move and from the hip while its high rate of fire sacrifices controllability for saturation. The previous changes were an overreaction, this is a corrective update.

AN94: Reduced vertical recoil. The AN94’s 2 round burst mode is incredibly accurate, but it suffers from a low rate of fire on fully automatic. The recoil in full auto has been reduced somewhat to offset this penalty and make the AN94 more attractive.

G3A3: Increased damage at all ranges, reduced vertical recoil. The G3A3’s heavy recoil and heavy round are offset by a low rate of fire and a small magazine. The G3A3 was clearly outclassed at all ranges.

KH2002: No Change. The KH2002 is locked to burst fire, with a high rate of fire and a large muzzle drift the weapon favors accurate midrange fire.

L85A2: Increased accuracy, reduced muzzle drift. The L85 differs from other bullpup style ARs by having a low rate of fire, the accuracy and controllability were too low to offset the rate of fire.

FAMAS: The FAMAS combines an extreme rate of fire with extreme recoil making it very difficult to use at anything other than close quarters combat. Due to update restrictions, the FAMAS had different stats on all 3 platforms. The FAMAS is now uniform on all platforms and now has the correct 25 round magazine.

PP2000: Reduced the initial recoil. The PP2000 has a lower ROF than other PDWs and needed the controllability to be balanced.

UMP45: Reduced accuracy loss during full auto. The UMP45 hits hard and has a controllable recoil at the cost of a heavy initial recoil kick.

MP7: No Change. The MP7 has a very low recoil and a high muzzle drift that favors longer bursts than the P90.

AS VAL: Increased vertical recoil, reduced first shot recoil, reduced accuracy on the move. The AS VAL fires a long range, highly accurate, high damage projectile that favors short bursts or single fire when stationary. While still quite good from the hip, the AS VAL will suffer if fired while moving and aimed.

PDWR: Reduced the initial recoil. The PDWR has high recoil and favors burst fire, the added initial recoil was making it less effective in small bursts.

PP19: Slightly reduced the initial recoil when firing, increased base damage. The PP19’s high initial recoil was over penalizing the burst fire needed to be effective on the low damage, high capacity weapon.