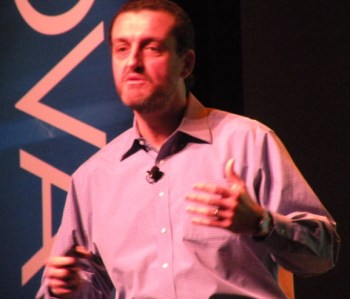 Game developers have been sore about the sales of used games and how they eat into new sales without giving the developers or publishers any compensation.

One culprit, they say, is GameStop, the biggest U.S. game retailer, which besides selling new games, also buys back used games.

But GameStop’s No. 2 executive said today that the whole industry benefits from the used market because it brings new gamers into the market.

“This is the elephant in the room,” said J. Paul Raines, chief operating officer of the biggest U.S. game retailer, speaking today at the DICE Summit in Las Vegas. “Do used game sales hurt new game sales? No.”

Raines said that only four percent of GameStop’s used game sales are for titles that debuted in the last 60 days. The retailer’s surveys of 2,000 gamers show that gamers view used games as a way to try out new kinds of games they wouldn’t otherwise have played. And gamers use 70 percent of the proceeds from selling their games to make new game purchases. About 14 percent of new game purchases are funded by trade-in credits.

[Update: Michael Pachter, analyst at Wedbush Morgan, was sitting in the audience. He said that used games are about $2 billion, or 20 percent, of GameStop’s overall sales. He said that publishers are mad that GameStop often pays a high price to buy back brand-new titles from gamers, giving them a big incentive to trade in games they just finished. If GameStop offered a low price, fewer gamers would take the offer. GameStop also doesn’t offer a cut from these sales to publishers. That creates a risk. If publishers are upset about this, they might retaliate by giving more allocation of their games to Wal-Mart and Best Buy.]

[Second update: David Perry, chief creative officer of Acclaim Games, was one of those itching to confront Raines with questions from the audience. But he didn’t get a chance. Here’s his reaction:

The DICE speech was GameStop’s chance to step up, and respond to the Used Game Sale issue.  Instead they presented the same corporate rubbish.  Just like the Digital Distribution is 12-17 years away, statements last September.

I was hoping they would accept questions from the Audience.  But no.  Of course not.

They should have said, “We understand you feel that our used game model is unfair, we hear you, we are setting up meetings with the top publishers in the industry, to focus on this question, and find an equitable solution.”

Instead they just say “these are not the droids you’re looking for” as they wave their hand in the air.

In reality, imagine Regal Cinemas decided to start buying back ticket stubs from movie viewers, and selling them to the next person in line (keeping all the revenue for themselves).  Over and over and over.  Just how long would Hollywood stand for that?

Now imagine that Hollywood advertises and partners with Regal cinemas to actually generate their audience!   So they even pay to dress up the cinema with advertising, standees etc.  After driving someone to see the movie, Regal turns around and sells them a used ticket, and keeps the money.

It’s complete smoke and mirrors, and to be clear, the industry has NO problem with them opening some other chain called “USED GAME STORE”, but that we won’t be sending our traffic to.

In my presentation I renamed them “Used GameStop”, and the entire room burst into applause.  Why?  Clearly GameStop are oblivious to the fact that the industry IS NOT behind this practice?

Nobody can speak out as they rely on Gamestop, so I do.  But trust me, there is talk of standing up against them as an industry.  If that happens, GameStop stock will PLUMMET, (E3 shows it’s possible), so I’d suggest, they start talking to the industry, not getting creative with their Powerpoints and hoping everyone will buy into this nonsense. End of update 2]

There is no question that GameStop, with 6,207 stores worldwide is hugely important to the game industry. It often transacts 40 – 70 percent of the total industry sales for a particular game. The company is adding 400 stores across the world this year and predicts a 10 – 12 percent growth in sales this year. That reflects some slowdown compared to 2008 and down compared to GameStop’s average growth of 22 percent, but it’s reasonably good compared to other industries.

Raines said that mothers are an increasingly important game shoppers, a fact backed up by Anita Frazier, an analyst at NPD who followed Raines with her own presentation. Frazier said that games are not recession proof but that game sales are not tied to the fortunes of the S&P 500 stock market index. She noted that music sales are now less than half of game sales, when it used to be the other way around a decade ago.

About 58 percent of the U.S. population over 13 now plays games. All told, there are 174 million gamers, up 6 million gamers from just a year ago. Of every dollar spent on entertainment, video games are now the largest category, bigger even than movie and TV revenues, Frazier said. These are the reasons game industry sales, and category retailers such as GameStop, can keep expanding.