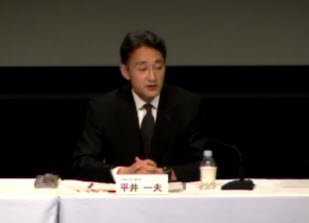 Sony executives have formally apologized to users who were affected by the hacker attack on the PlayStation Network, the online entertainment service that has been down for more than 10 days.

Today, Sony’s Kaz Hirai repeatedly apologized to users for the data breach. The company said it would begin restoring the service for the PSN and Qriocity music and video service within a week. It offered to reimburse customers for the costs related to credit card reissuance and for any needed identity protection service. Sony is also offering a “welcome back” initiative to compensate users for their losses. That includes free content, which may vary based on the region where the user lives; it also includes 30 days free subscription to the paid PlayStation Plus service.

Sony also pledged to move its service to a new data center and to beef up its security so this doesn’t happen again.

The company has been criticized for acting too slowly to respond to user concerns about the break-in and whether or not personal information such as credit card numbers were stolen. Sony’s Hirai said as many as 10 million credit card numbers may have been stolen by the hackers.

Frankly, I think Sony did a good job here, although it should have done it much sooner. It pretty much said everything that I expected it to say. It probably could have disclosed more about the exact nature of the attack, but it erred on the side of not disclosing this information to prevent future attacks.

Are you satisfied that Sony said enough to mollify angry users?