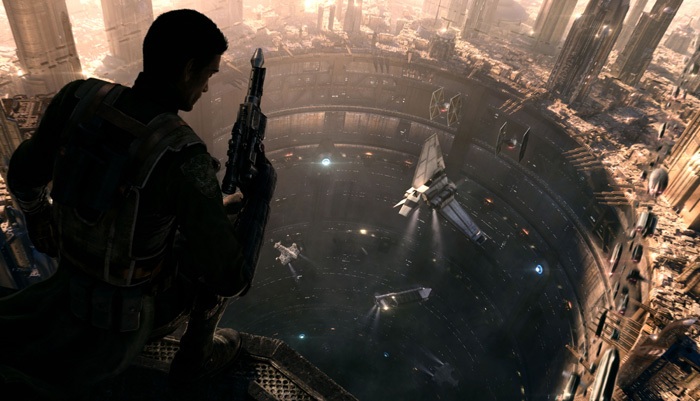 The Walt Disney Company purchased the rights to Star Wars with its acquisition today of Lucasfilm, the production company that makes Star Wars, and all of its subsidiaries. That includes video game developer and publisher LucasArts.

“Disney bought all Lucasfilm companies, including LucasArts. For the time being, all projects are business as usual.  We are excited about all the possibilities that Disney brings,” Lucasfilm publicist Barbara Gamlen said. The original release notes that all LucasArts employees will remain on staff, but Disney executives did reference plans to focus on social and mobile Star Wars games as opposed to high-end console releases.

We’ve contacted LucasArts to determine what this means for that storied developer’s many beloved games, including the in-development Star Wars 1313 and the Star Wars: The Old Republic massively multiplayer online role-playing game. We’ll update with any new information.

Disney made the purchase for $4.04 billion. You can read our full story here, as GamesBeat is focusing on the video game side of the story.

“Star Wars resonates with consumers around the world and creates extensive opportunities for Disney to deliver the content across its diverse portfolio of businesses including movies, television, consumer products, games and theme parks,” a press release from Disney reads.

The Walt Disney Company chief executive officer Robert Iger continues the enthusiasm: “Lucasfilm reflects the extraordinary passion, vision, and storytelling of its founder, George Lucas. This transaction combines a world-class portfolio of content including Star Wars, one of the greatest family entertainment franchises of all time, with Disney’s unique and unparalleled creativity across multiple platforms, businesses, and markets to generate sustained growth and drive significant long-term value.”

The Star Wars films alone have made $4.4 billion at the box office globally. Lucasfilm’s extended media properties, merchandising lines, and video games add a significant stack of cash to that sum.

“For the past 35 years, one of my greatest pleasures has been to see Star Wars passed from one generation to the next,” Star Wars creator and chief executive officer of Lucasfilm George Lucas said. “It’s now time for me to pass Star Wars on to a new generation of filmmakers. I’ve always believed that Star Wars could live beyond me, and I thought it was important to set up the transition during my lifetime. I’m confident that with Lucasfilm under the leadership of Kathleen Kennedy, and having a new home within the Disney organization, Star Wars will certainly live on and flourish for many generations to come. Disney’s reach and experience give Lucasfilm the opportunity to blaze new trails in film, television, interactive media, theme parks, live entertainment, and consumer products.”

Here might be the biggest news of this deal: Disney is making a new Star Wars film. A Star Wars: Episode VII is set to debut in 2015. George Lucas will stay on in the role of creative consultant.

LucasArts was originally founded in 1982 with purpose of developing video games under the label Lucasfilm Games. In 1990, Lucasfilm reorganized the game division under its own LucasArts title. It’s best known titles in the early days were its adventure games like 1987’s Maniac Mansion and 1990’s The Secret of Monkey Island.

The developer’s Star Wars games are also a big part of its history. The 1993 X-Wing space-combat simulation game is considered by many to be one of the best examples of that genre.

Since the beginning of this century, LucasArts has found the most success in working with other developers. BioWare’s role-playing Star Wars: Knights of the Old Republic game in 2003 is often referred to as the best Star Wars game.

Star Wars now joins the Disney’s recent acquisition of the Marvel comic-book company. Disney now holds the rights to some of the biggest names in entertainment.