The biggest game coming to Kinect this year now has a release date.

Disney Interactive and Harmonix announced today that Disney Fantasia: Music Evolved will debut on Oct. 21 on the Xbox One and the Xbox 360 after three years of development.

Fantasia is motion-based beat-matching music game that taps the Kinect motion-sensing system on Microsoft’s consoles. As such, it’s one of a handful of games that aims to make full use of the system, which Microsoft decided to unbundle from the Xbox One earlier this year.

But Harmonix is still moving forward with Fantasia, a reimagining of the classic Disney animated film. You get to play the Sorcerer’s Apprentice (Mickey Mouse’s iconic role from the film), using your hands to match gestures and motion graphics that you see on the screen. 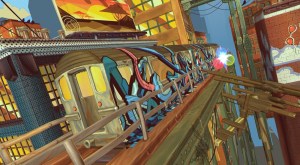 As you get better with your “beat matching,” you can create remixes of songs that are your own unique creations, said Chris Nicholls, the executive producer of the game at Disney Interactive, in an interview with GamesBeat.

Harmonix disclosed today that the motion game will have dozens of songs, including Depeche Mode’s “Enjoy the Silence,” Drake’s “Take Care,” Tchaikovsky’s “The Nutcracker Medley,” The Police’s “Message in a Bottle,” MIA’s “Galang,” and The Who’s “The Real Me.”

Fantasia focuses on one section of the 75-year-old movie where Mickey Mouse plays the Sorcerer’s Apprentice and gets into a lot of trouble. Your job as an apprentice is to fight the chaotic forces that seek to bring noise to the various realms. You want to restore some harmony as you master the music in the different environments such as The Shoal, a place underneath the ocean, and in a newly revealed urban section, The Neighborhood. Harmonix also previously showed off The Haven, a snow-covered forest, and The Press, an old factory. 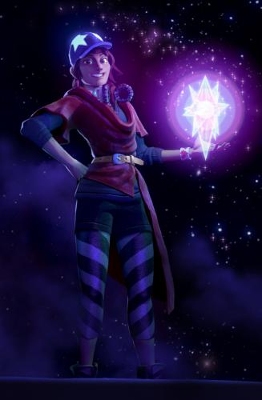 In a preview, he showed how The Neighborhood is a 3D world, where you use Kinect as a 3D interface. You can push forward with your hand to move forward in the 3D environment, or navigate sideways.

In songs, you use your hands to match the direction that various arrows point. You can jam for as long as you like or play in a competitive way so that you can unlock more options. You can play with one or two players and challenge friends to beat your score. During a two-player session, you can battle another player to obtain control of the remix to emphasize things like guitar solos or drum solos.

A new character, Scout, will narrate the story and serve as a guide.

One you complete a lot of the songs in a section, the place changes. The Neighborhood becomes more colorful and vibrant. Overall, Fantasia will have more than 30 tracks.

Previously announced tracks for the title include: 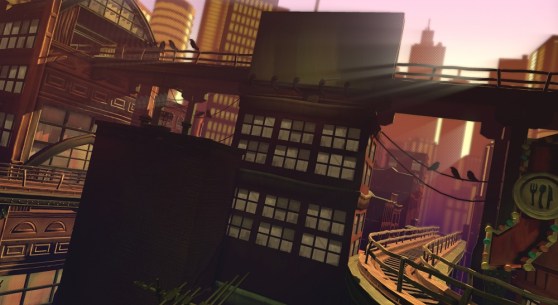