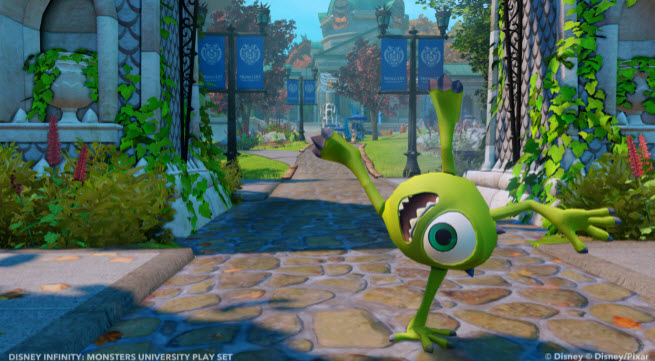 Above: Mike from Monster’s University

The basic gameplay is boring

My 13-year-old got tired of doing the same kinds of missions over and over. The 10-year-old played the game for a lot longer. I enjoyed some of the mini-games, such as playing paintball in Monsters University and fighting pirate ships in Pirates of the Caribbean. But there was a lot of drudgery in between. The greatest danger for Disney is that kids will view the gameplay as generic across the whole play sets.

The fighting with characters in the play sets is very routine. The enemies are fairly dumb. Monsters University introduces the concept of stealth but not in an elegant way. You sneak behind some of the enemies, who patrol the Fear Tech campus at night. Then you “roar” at them and make them lose their gold coins. This is amusing at the outset, but becomes boring after the 25th time you do it. And the enemies show very little intelligence. They won’t, for instance, hunt you down in a pack with much skill. So it’s easy to take them out one at a time, simply by pressing the Y button, over and over again. Blocking or dodging are possible, but unnecessary with such dim-witted opponents.

When it is challenging, it seems so in a silly way. At one point, I ran into some difficult gameplay in the Pirates play set, where I had to take out nine pirate ghost ships, with three or four of them coming at me at a time. I had to upgrade my ship with new weapons and protections in order to defeat the pirates. That was a fun challenge, but I didn’t like the fact that I had to go get some new equipment and return to the mission. The mission should have told me at the outset what I needed in order to complete it. Instead, I played it about 10 times, gave up, and returned when I had upgraded my ship.

In Monsters University, I also had a hard time getting past a nasty Fear Tech student who was on a roof. He was basically unbeatable, but stood in the way of my completing a mission. I had to switch to a different character in order to beat him and just knock him off the roof. Perhaps that is the point of Infinity, to make use of multiple characters, but it makes me think of what could have been. For instance, with Skylanders, you can withdraw a character who has taken a lot of damage and substitute a fresh one. But since there is no consequence to death in Disney Infinity, you have no motivation to do that.

Disney and Pixar films are engaging because they have great characters and great stories. There isn’t much of that here. Although each movie property is always based on a strong story, the games are completely lacking in this regard.

The interlocking collectibles and gameplay are a problem sometimes. In one mission, I had to have a backpack to toss into a window at Fear Tech. So I ordered it from the Toy Store. I looked around for the place where it would drop from the sky. But it never showed. up. I looked around the entire Fear Tech campus. Then I went back to the Monsters University campus. It wasn’t there either. Then it showed up finally, at a spot in the Monsters University campus where I had looked before, far from the place where I ordered it. This kind of design flaw interrupts what little flow there is to the story.

I get the sense that the worlds are each half-built. If you go into the fraternity row section of Monsters University, you can’t go inside the buildings.

The idea is great, but the execution is poor. Aiming with any weapon or hero is a real chore. In the Pirates of the Caribbean play set, I was trying to smash a barrel and it took me seven swings. Captain Jack can’t hit anything the first time, whether he is swing a sword, throwing a grenade, or firing his pistol. I simply adjusted my play to suit the imprecision by firing lots of bullets, expecting one to hit home.

In The Incredibles play set, the hoverboard is very maneuverable and easy to steer. But the cars are very difficult to master. They drive as if there is absolutely no turning radius. The ships are quite easy to steer in Pirates, but it’s very difficult to stay facing in the right direction during a sea battle.

The flip side of this is that there are contradictions in the design. In Monsters University, the school is billed as an open world where you can wander. Most of the buildings have upper levels where you can roam. But there is often only one way up. I was trying to perform an early mission and was looking all over the place for a way to the top of the building. It turned out that I had to scare a monster first. Then the monster rises from the grass and gives my character something to step on. So what is this really? A game on rails, a poorly designed initial experience, a bug, or false advertising for an open world?

None of the bugs I encountered were game killers. But they were maddening. I purchased a couple of things to outfit my ship in Pirates. But they didn’t arrive on my deck and I couldn’t equip the ship with them. Still, the game docked me the coins I used to purchase them. Then, after I’d died a few times because I needed my cannon, they suddenly showed up in the appropriate spot on the ship.

Other bugs: Pirates who are talking to you will repeat themselves. Frame rates are often poor on the Xbox 360. 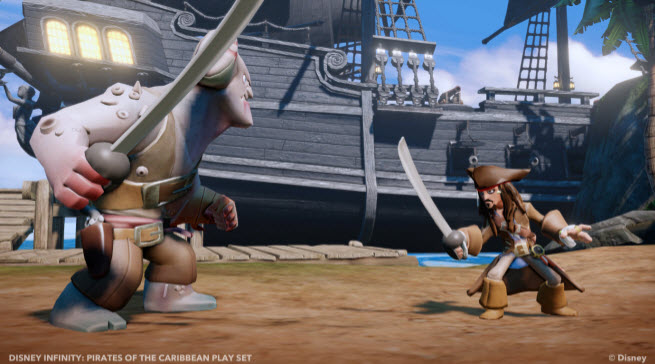 The game feels like it moves in slow motion

You need a lot of patience in this game. When the characters are talking to you, all movement ceases, even if you’ve got better things to do than to have a conversation. When you’re in a sword fight, your enemies aren’t very fast. That makes up for the fact that you can’t swing very accurately. Maybe these mechanics are designed for kids. But if they drive adults crazy, they’ll drive kids crazy too. At some of the smallest achievements, the game stops and runs a cute fireworks display that makes you feel good. But by the 100th time you’ve seen this cute canned sequence, it feels like another waste of your time. And you can’t skip it.