Disney really really wants you to buy a lot of toys. So much so that it has embedded various videos of the other toys that you could be using in each play set. If you watch these videos, you can unlock some cool gear for your Toy Box. You get the feeling that everything in the game is linked to enabling more transactions. You can complete the play sets without buying anything more than the Starter Kit. But when you’re walking on ledges in Monsters University, you probably want to have Mike, the little green guy, on hand, rather than the burly blue Sulley. The transactions are very plentiful in this game, to the point where they’re going to inevitably interrupt the story and annoy you. Each additional toy will sell for $12.99, and power disc packs sell for a few dollars. These packs include unique web codes to unlock online content, including content in the upcoming Disney Infinity Toy Box app on iOS.

The interface can be clunky

The worlds are fairly big, but there was no world map to go with each world. So I got lost frequently. At Monsters University, you have to exit the campus at certain points. There’s an exit to get to Fear Tech, another for the paintball arena, and another for the campus fraternities. But since I had no map, I had to search around frequently to find those exits. The same goes for the Pirates play set. I finished a mission in the middle of the ocean. Once I was done, I didn’t know how to get back. I had to just initiate another mission to navigate to a place where I could go. Pirate ships will occasionally show up to fight you, but the seas are, for the most part, lifeless.

There are green arrows that direct you where your next mission point is. But it isn’t always on. At the beginning, you have to realize this and actively click the “X” button to get directions. If you simply click “Y” to accept a mission, you’ll have no idea where to go on the big map as you finish each sequence of a mission.

The controls for switching weapons are also difficult on the Xbox 360. You hit the right bumper to call up a wheel of your inventory. You hit the right stick to move it to the point where you can use it, then you hit A to use it. You can also put it into the quick access portion of your Dpad. But the weapon often disappears inexplicably from the Dpad, and you have to do this all over again. In the meantime, this completely stalls any action sequence. 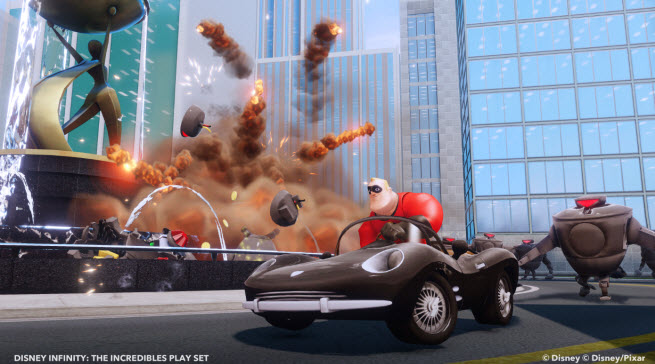 Above: Disney Infinity The Incredibles

The beginning introduction to Infinity shows what is possible when you use a spark of your imagination, and how that can grow into giant worlds that you create by yourself and then share with your friends. It’s a tantalizing vision and a wonderful interactive video. Disney Infinity is both amazing in its breadth and frustrating in its execution.

I think kids will buy into the vision, and, because it’s Disney, will forgive many of the little flaws that I’ve pointed out. Adults will have less patience, though. And Disney should address this critical part of the fan base as it seeks to take on Skylanders, which is getting more polished as it moves into its third product cycle. As a reviewer, I have to remember that I am not the target market, and my kids are more like the real audience. But they weren’t thrilled with the game either, and I’m not sure how long they’re going to stick with it.

Can Disney fix the problems? Sure. The game is malleable in a number of ways. And there will be many more toys and play sets. But this first group of play sets in the Starter Pack is underwhelming.

Disney Infinity launches Aug. 18, 2013 for the Xbox 360, PlayStation 3, Wii, Wii U, and 3DS. The publisher provided GamesBeat with the final release version and toys for the Xbox 360 for the purpose of this review.