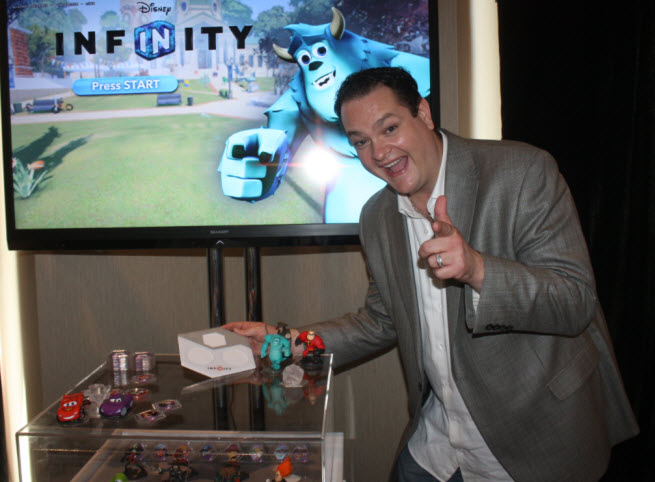 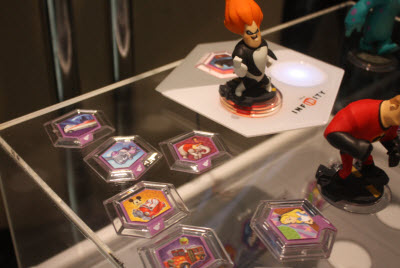 When Disney announced its Infinity platform for combining toys and video games in a single entertainment platform, it was easy to dismiss it as a Skylanders copycat.

Activision has seen more than $1 billion in revenues from its Skylanders toy-game hybrid products. Disney’s offering is similar, but it is pouring a lot of its game- and toy-design chops into making sure that Infinity will be unique and valuable, considering that fans could pour a lot of money into this new platform over time.

Disney had originally targeted a June launch, but it delayed until August to make sure the game is polished. Disney is position Infinity as a platform to transform it into a huge game company, for once and for all.

We got a look at Infinity recently, and it’s clear that Disney’s engaging in a full-scale cross-platform toy and game war. Infinity is going to have depth and scale, and it will benefit from tapping into some of the biggest entertainment brands on Earth, said John Vignocchi [above], the executive producer of Disney Infinity, in an interview with GamesBeat.

“We have this treasure chest of intellectual property, and we can decide how much of that to leverage in Disney Infinity,” Vignocchi said.

Disney is making several entertainment properties available on Disney Infinity from its inception. So it’s clear that Disney isn’t just testing the waters with Infinity.

The toy-game competition is perhaps one of the biggest wagers any company could make in entertainment. That’s why only the biggest companies — Nintendo, Disney, and Activision — are moving into the market so far. But Infinity isn’t the only project happening. Disney will continue to invest in standalone games, such as separate mobile games from Disney Mobile. And if Disney Infinity is a hit, the entertainment company could have a profit engine for years to come.

Disney began work on Infinity shortly after it shipped Toy Story 3: The Video Game in mid-2010. The company’s Avalanche Software division in Salt Lake City was enamored with that Toy Story 3’s Toy Box mode, which was an open world where you could engage in any kind of play with a bunch of different characters. Kids could build their own town from scratch, and it was clearly the innovative part of the title.

Then Disney adapted to the shift toward social and mobile games acquired social game maker Playdom for $763.2 million in July 2010, and it also grabbed mobile game maker Tapulous in mid-2010. Playdom’s CEO John Pleasants became the head of Disney’s game business, as the move toward digital games took on a new urgency.

A big part of the team was working on a game for Cars 2. But a smaller skunk works team at Disney’s Avalanche focused on a game called Buzz Lightyear Star Command. In conversations with that team, Pleasants directed to do something much more ambitious that would be a platform for all Disney games in the future.

“Instead of a one-off game based on Tron or Tangled, what if we could make a game using the same engine and tools and vary the amount of content we could do for a particular Disney property,” said Vignocchi. “The idea of creating a platform really resonated with us.”

While this was happening, Activision Blizzard launched Skylanders: Spyro’s Adventure in October 2011. That title combined a multiplatform game with a line of toys that you place on a “portal” connected to a game machine. By placing the character on the portal, the toy character transfers into the game for the player to control. The series was an instant hit, and it has sold more than $1 billion worth to date, with toy sales beating out sales of Star Wars toys. That’s a real threat to Disney, and, while Disney executives won’t acknowledge it, Disney Infinity was clearly adapted to mimic the toy-game hybrid strategy of Skylanders.

But Disney’s own portal, or “Infinity Base,” isn’t an exact copy. The base lights up with different color LED lights based on which character is on it.

Like with Skylanders, you place a Disney toy character on the portal to activate that character inside the game. But you can also add “power discs” in the form of plastic hexagonal discs for the character to stand on. Those separately purchased power-ups give the character new abilities, and you can put up to two of them under a character. You can improve a character’s health by 20 percent or give the character an economic boost.

The starter pack for a character comes with one of those power discs included. Kids can trade those discs with each other. That enhances replayability for the toy-hybrid platform, giving players a reason to acquire a new toy for $12.99 each. The base package will sell for $75, including the game and the base platform. The potential for additional collectible toy sales is enormous — and it’s on a scale that only Disney can do. 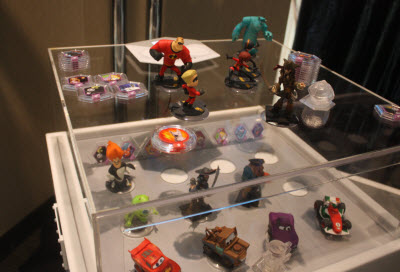 The software is broken into playsets, or “true to property experience,” Vignocchi said. These are original stories based on the entertainment property, such as the upcoming Monsters University coming out in June from Disney’s Pixar animation division.

“The days of going to see the movie and going home to play the same story in the game are gone,” Vignocchi said. “Players want a new adventure. That’s what we aim for with every play set.”

The game teams are working with filmmakers to create the original stories and craft characters for the games.

The other part is the Toy Box mode, which is like the toys on your living room floor. They’re all mixed together. You can mix and match Disney characters from different properties in the Toy Box mode. In that mode, you can add a “theme disc” to the back of the portal, changing the whole background of the world to match the theme. You can, for instance, switch from a Toy Story world to a Tangled world in an instant.

“It’s not a linear, level-based game” like the Skylanders games, Vignocchi said. “Players can decide where they want to go and how they want to play. There’s no wrong way to play the games.”

At the outset, the Toy Box world is populated with a mash-up of buildings and environments from different Disney properties. The creativity part of the platform is designed to be intuitive. With Toy Box, you can use a magic wand to highlight different objects. Once it is highlighted, you can move that object around, delete it, or edit it. You can rotate the item or use it to build things like castles in the sky. When you’re editing an item, you can change the texture of the item so it will look different in the world. You can modify the nature of the world very quickly simply by putting a power disc on the Infinity Base.