The Star Wars: Rise Against the Empire “play set” is one of a trio of cartoon-style Star Wars games that go with the family-friendly Disney Infinity 3.0 Edition toy-game platform that is coming later this year. The game is part of a larger Disney strategy to capture the minds of kids, and it shows Disney is serious about raising the stakes of competition with rivals that include Nintendo’s Amiibo, Warner’s Lego Dimensions, Activision’s Skylanders, and Rovio’s Angry Birds. All of those companies are going to put the squeeze on parents as their kids are going to want all of them.

As we noted with the previous announcement of Star Wars: Twilight of the Republic play set, the toy-game hybrid category, dubbed “toys to life,” has generated $4 billion since 2011. A recent survey said that parents spent an average of $131 over the last six months on such products. GamesBeat got a hands-on preview and had some interviews with Disney leaders at a recent event. Disney is also releasing a new trailer depicting the Rise Against the Empire play set today.

This toys-to-life category is crowded. But Michael Pachter, analyst at Wedbush Securities, told us, “I agree that the toys to life category is crowded, but as a practical matter, these are toys, and bringing them to life should take share from conventional toys, so there is still a lot of room to accommodate all of the new franchises.”

And as franchises go, you can’t do better than Star Wars. 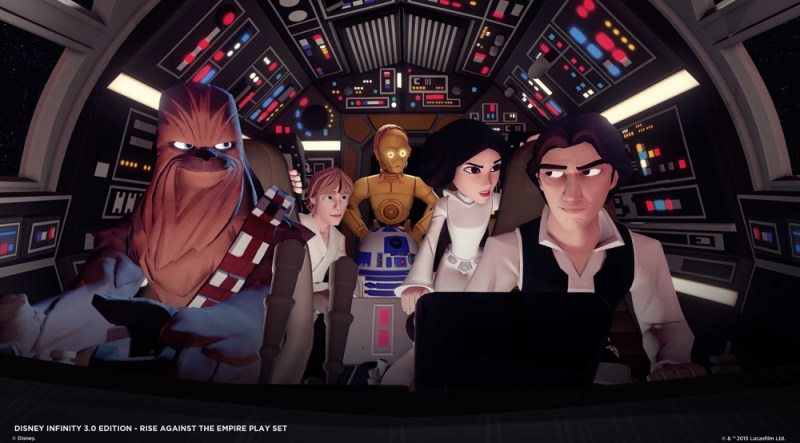 “We’ve got ambitious goals, including bringing all of these great brands together in Disney Infinity 3.0, ” said John Blackburn, the head of Disney’s Avalanche Software, the maker of the Infinity series.

With the latest version of Infinity, players can play an animated game on their consoles or other platforms and then use toys connected to a portal to interact or switch characters within the game. Each time Disney Interactive comes out with a new play set, that is the equivalent of a 10-hour game. The art style takes advantage of the 3D graphics of the new consoles, but it is rendered in a cartoon look that could appeal to both kids and adults.

That distinction is important as Electronic Arts is likely to launch its Star Wars: Battlefront video game this year, and that title will have highly realistic 3D graphics that push consoles and PCs to the limit. By having its partners release different kinds of games, Disney can satisfy the total demand in the market this year for all things Star Wars as it tees up the new Star Wars: The Force Awakens film in the fall. But it doesn’t have to worry that each game will cannibalize the other.

The cartoon style of the Disney Infinity Star Wars titles has been proven to be appealing to all ages in the past. Lego Star Wars: The Video Game launched in 2005, and it sold millions of copies worldwide. Altogether, Lego and TT Games sold more than 21 million copies, proving that parents playing games with their kids was a huge market opportunity. The cartoon look is working again for Disney Infinity, which has been able to hold the attention of players with one cartoon-like play set after another.

A year of Star Wars 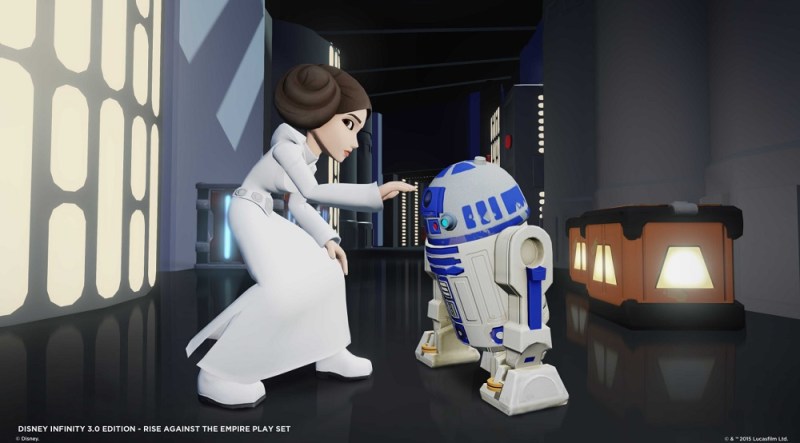 Above: Princess Leia and R2D2 in Star Wars: Rise Against the Empire.

Blackburn said the upcoming film is a “wonderful window” of opportunity for Disney to introduce all sorts of nostalgic Star Wars revivals.

Ada Duan, the vice president of Lucasfilm digital business and franchise management at Disney, said it was important to create an authentic Star Wars experience on Infinity because games are often the first way that kids experience Star Wars for the first time.

“We also know Star Wars is a multi-generational property,” she said. “We often see parents introducing their children to Star Wars in multiple formats, beyond the films.”

She said the original vision for a complete experience emphasized ease of access for all ages, lightsaber combat, multiple environments, and space combat.

To create all of its play sets and features for Disney Infinity 3.0 — including the three Star Wars play sets — Disney enlisted the help of eight major game studios, said John Vignocchi, the vice president of production at Disney Interactive. That tells you how big an investment the company making into its year full of Star Wars and the Infinity series. These developers are key to making deep games that are interesting to both kids and die-hard adult fans of Star Wars.

“Often, you would not see these developers in the kids and family space,” Blackburn said. “But parents want to play with their kids, and that is primarily why we have done this.”