Disney is working on one of the biggest projects in its theme park history. Galaxy Edge is the Star Wars-themed land that’s coming to Disneyland Park in Anaheim, California next summer, with the Walt Disney World version opening at the resort’s Disney’s Hollywood Studios park in Orlando, Florida that winter. One of Galaxy’s Edge’s marque attractions will have park guests flying the famous Millennium Falcon, and the project is giving Disney’s Imagineers (that’s what Disney calls it theme park designers and engineers) challenges that are all too familiar to those that have worked in video games (Disney declined to comment on this story).

The Millennium Falcon ride is a simulator, meaning that guests ride in a vehicle that can turn and shake to simulate larger movements. Coupled with a video screen, a simulator can give people the sensation of flight. It’s similar to what the original Disney Star Wars ride, Star Tours, has been doing since 1987.

But most simulators, including Star Tours, run a ride film. The vehicle knows how to move because it knows what’s coming next in the movie. The Millennium Falcon ride, however, is rendering its action in real time, just like a video game. And you aren’t just watching the action. Six guests go through the ride at the same time, and they each takes a spot at one of the ship’s stations. Two people sitting at the front act as pilots, with two gunners and two engineers. You push buttons and use controls like it was a real ship, and your actions will impact what happens during the ride. 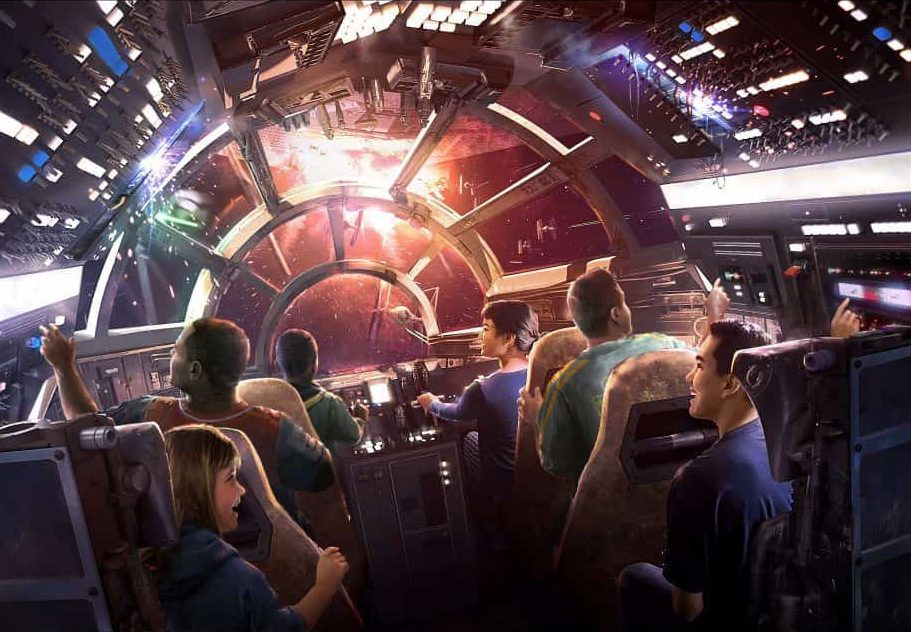 Above: What the inside of the ride vehicle will look like.

“You’re traveling through, potentially, so much space, and your actions determine the branching, where you are in the decision tree, and what happens next,” Disney parks expert Jim Hill told GamesBeat. Hill has been covering theme parks for decades. He now runs a network of podcasts focused on theme parks and the Disney company.

The Millennium Falcon ride is an ambitious project, and it requires some impressive technology to run it. According to Hill, the ride requires intense computer equipment in order to render its branching action in real time. But that’s just one challenge that Disney is facing. The other problem is one all video game designers tackle: difficulty.

The ride’s conceit has you running a job for a smuggler called Hondo (whom, according to my more Star Wars-knowledgeable editor Jason Wilson, could be the beloved pirate from the Clone Wars and Rebels cartoons). You can either fail or succeed in your mission. That seems obvious for a video game, but that can be a scary prospect for a theme park ride. When Galaxy’s Edge opens, its attractions will have giant lines. People will be waiting hours to ride this Millennium Falcon. Disney has to make sure that they aren’t disappointed, even if they fail.

“What helps is, if you remember from the Star Wars movies, the Millennium Falcon doesn’t necessarily always operate the way it’s supposed to,” Hill explained. “If you remember in The Empire Strikes Back, it was constantly cutting out. Han was beating on systems, or they’d fall out of light speed, that sort of thing. That’s kind of in canon. You’re suddenly having a bad experience, which sets up another comic misadventure. That sort of thing. Disney has tried to make it so that even when things go horribly wrong, it’s as funny as possible.”

“Don’t get me wrong. If you do everything right you’re going to have a really exciting adventure,” Hill continued. “But if, on the other hand, you’re really doing a poor job of it, that’s going to be fun too. But that’s — the problem is, as they’ve been playtesting it — they’ve written what they thought were really funny scripts, that sort of thing. But again, we’re human beings. We want to succeed. It’s the whole notion of, ‘I don’t want to be on the Millennium Falcon when the power is cutting out, or when the TIE Fighters are overtaking us.’ I want to succeed. They’re trying to work with that expectation, tweaking some story elements so at least you don’t go away with a bad taste in your mouth.” 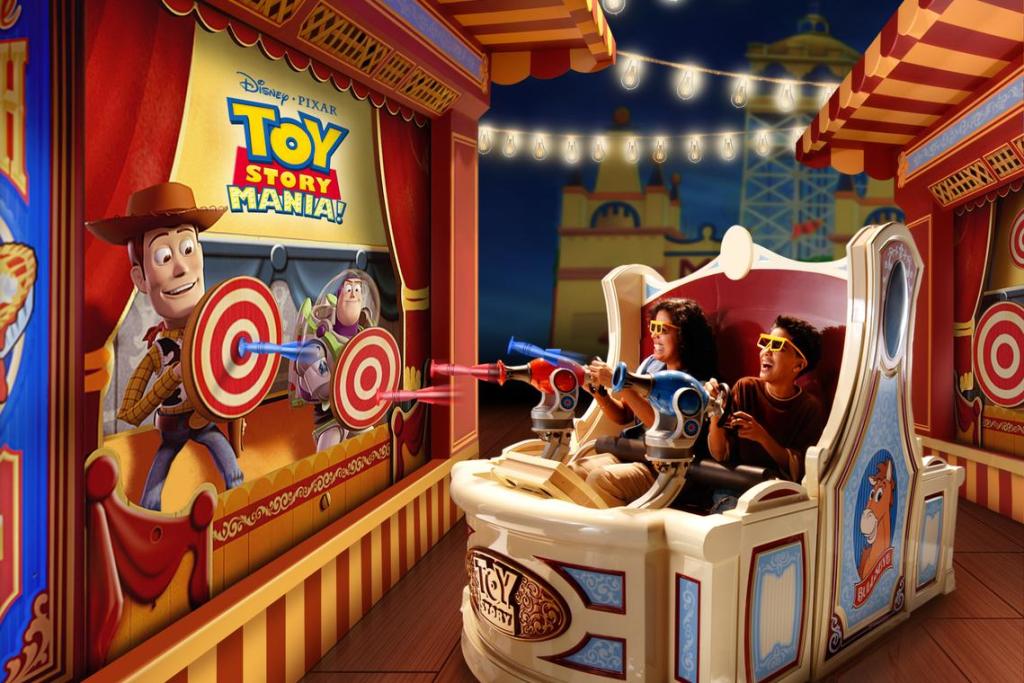 This isn’t the first time a Disney ride has had gaming elements. Games go back to the start of Disneyland in 1955, where a shooting gallery opened as part of the Main Street U.S.A section of the park. And when gaming went digital, Disney brought those elements to its rides. Toy Story Midway Mania, which opened in 2008, has guests shooting cannons at 3D films, aiming at targets and trying to get a high score. This is itself an evolution of the Buzz Lightyear Space Ranger Spin ride, which opened at the Magic Kingdom in 1998. That attraction doesn’t have any fancy 3D screens, but you’re still aiming a canon and shooting at targets.

You can’t lose at Midway Mania or Space Ranger Spin (or its Disneyland counterpart, the similar Buzz Lightyear’s Astro Blasters). Sure, your score can be bad, but if you can’t hit a single target, your ride experience will be essentially identical to the all-time high scorer.

Over at Universal Studios in Florida, the older Men in Black: Alien Attack attraction (it opened in 2000) works similarly. Guest shoot at aliens as they go through a ride track, trying to get as high a score as possible. In this ride, your team’s score will actually impact the ending. If you do well enough, you’ll see an animatronic alien preparing your Men in Black suit, followed by a video of Will Smith congratulating you. If you don’t score enough points, you see a different alien reprimand your performance before Will Smith erases your memories.

But that’s just the very end of Alien Attack. Everything before and after is the same for everyone. On the Millennium Falcon ride, your decisions will change the experience as its happening. And victory can have consequences that extend beyond the attraction itself. Disney wants Galaxy’s Edge to be an interactive area where you are part of a story. It will be able to use its tracking and data-gathering technology to know how you did on the ride, and costumed characters in Galaxy’s Edge will react to you accordingly. If you complete your smuggling job, an alien may walk up to you and congratulate you on the successful mission.

Above: Concept art for Galaxy’s Edge.

How do you do well at anything? You practice. For many gamers, that’s how we learned to save princesses and win wars against armies of aliens and robots. We kept playing until we were good enough.

But the Millennium Falcon ride won’t give you an opportunity to practice before you go on. The attraction is sure to get long lines, so you may only get to experience the ride once during your trip. It’s a lot to expect a person to succeed at flying a spaceship if they’ve never done it before.

And this is a cooperative experience. You’re playing with five other people, some of which you may have never met before. You could be doing well, but it won’t matter if the rest of your team struggles. It’s one thing to communicate with your family and friends if they’re on the same ride as you. You may feel comfortable yelling at the person at the back that your engines need more power if that person is also your brother, but you may be less likely to communicate if your engineers are strangers.

Disney can overcome part of this problem with tutorials. While you’re waiting to board the ride, video screens can explain the ship’s controls in detail. But this solution has its own problem: language barriers.

“When you factor in how many guests are international travelers, it has to be a lot more intuitive than they had initially anticipated,” Hill explained.

This problem extends to the ride itself. You’ll have to react to what is happening during the attraction. The ride can’t just give directions in English, because they won’t be understood by a large number of guests.

Disney may not mind that people won’t succeed on their first try. Just as you don’t tend to beat a video game on your first try, you probably won’t get the best possible outcome the first time you ride the Millennium Falcon attraction. That could just encourage you even more to ride it again. And if you don’t have enough time to ride it again that day, it could encourage you to come back to the park just to have another swing at it.

But that plan could backfire. Guests could be more frustrated than motivated by their failures. 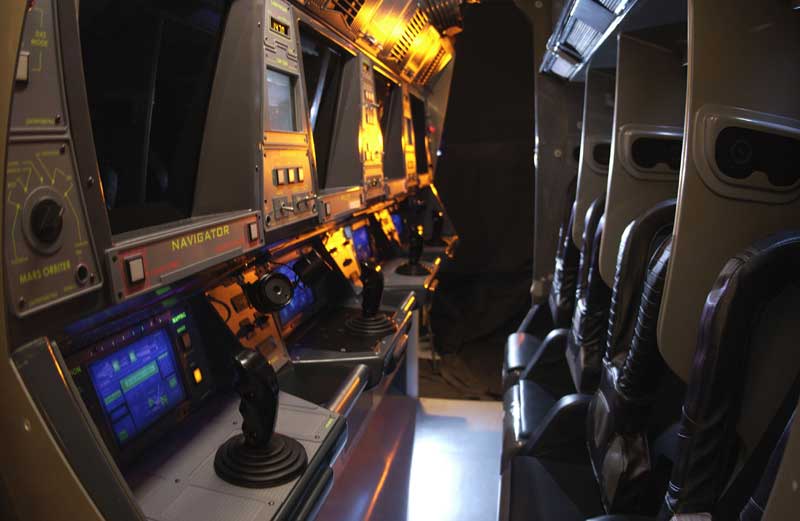 Above: The Mission: Space ride vehicle.

The easiest solution would just be to make the ride, well, easier. But that’s something Disney is trying to avoid, according to Hill. Disney has another space-themed simulator in the Epcot park called Mission: Space, which debuted in 2003 and had a major refurbishment in 2017. This also gives each passenger a job, like pilot or engineer, and buttons and switched that they’re supposed to interact with. But with Mission: Space, those buttons don’t actually do anything. There is no challenge. The ride is always the same, whether you personally separate the second rocket or not. It could be one reason why Mission: Space does not command long lines. As I wrote this story, Mission: Space has a 15 minute wait. Epcot’s most popular attraction, Soarin’, has a 75 minute wait.

Galaxy’s Edge is a huge investment for Disney, with each version costing $600 million. It’s a response to what Universal, Disney’s chief theme park competitor, has done with Harry Potter. Universal has opened Potter-themed lands across its parks that have brought immersion to a new level, driving visitors to Universal’s park. Even now, Universal is planning a new Forbidden Forest-themed coaster for its Islands of Adventure park in Orlando.

Disney’s new Star Wars offerings could help the company cool the theme park world’s Potter fever. The ambitious Millennium Falcon will need to be a hit to get Galaxy’s Edge off to the hot start that Disney is hoping for.

And how will Universal counter Disney’s counter? Universal’s is now working on theme park lands and attractions based on Nintendo.

Gaming has become a permanent fixture of the theme park world.