Divekick’s appeal is that players only use two buttons — for everything. Add in countless in-jokes, and it’s a play on fighting games and their circuits. The character S-Kill, for instance, is a parody of former Capcom community manager Seth Killian. Others have similar origins, but nearly all of them are caricatures, which makes Divekick (out today for PlayStation 3, PlayStation Vita, and PC from Iron Galaxy Studios) a fighting game fan’s dream — at least in theory.

Divekick might not always make sense, but that’s its charm. I found a partner for local multiplayer, and while we rolled our eyes a lot in the beginning, we were laughing and enjoying the antics soon after.

The humor is good if mildly offensive. Mr. N, the overweight nerd character who wears footie pajamas and a neck pillow, is one of my favorites. He’s whiny and has a high voice, so nearly everything he says, from “Where did the chair gooooo?” to “The throeeees!” is entertaining, but it’ll make you feel bad when he sits down and cries over plates of food or when the tournament babe refuses to let him hug her. Another character, Kung Pao, is Chinese, as you can probably tell from the name. All she does is yell like she’s in a bad kung-fu movie, and it’s a bit insulting even if she is awesome. 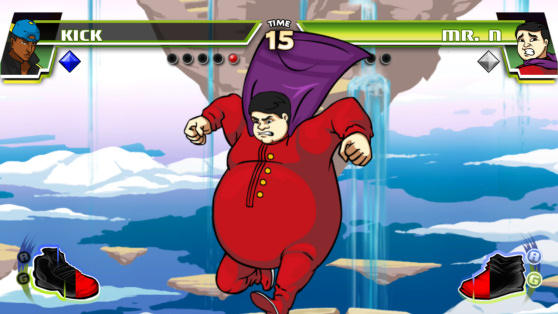 Lose four out of the five rounds, and a goofy fraud detection warning flashes on the screen. Another loss will brand you a fraud; a victory will avert it. This puts pressure on the player who already can’t catch a break, but it’s all in good fun. Sort of.

For only using two button inputs, Divekick has more depth than you might initially recognize. Players dive and kick using L1 and R1 (on the PS3 version) or any other buttons, depending on how you set the controls. Kicking propels you forward, and diving as soon as you hit the ground will cause you to bounce back (or “kickback”) as, unlike in other games, players can’t use the D-pad or analog sticks to move normally.

Every kick contributes to a Kick meter, which fills and activates a ground and air special. You might need to dig into the Options and then the How to Play menu to learn how to pull these off (basically L1 and R1 simultaneously while on the ground or in the air), but these add a little more variety to gameplay. 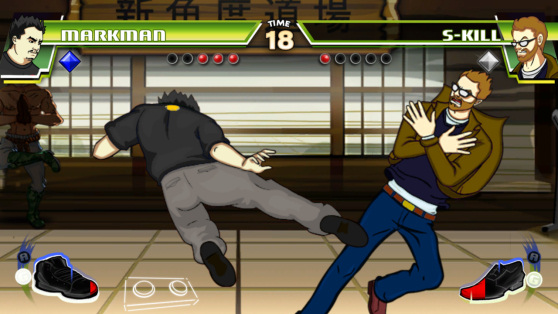 Since the goal is to kick the opponent, diving (more like jumping) matters in terms of height and timing. Judge carefully, and you’ll win. Though skill is important, all the diving and kicking can get ridiculous. Rounds are set at 20 seconds by default, which can make for some silly and intense fights.

Characters feel very different from one another, too, which makes memorizing their style all the more important to either player.

Divekick features a story mode, where players can enjoy two brief comic book-esque cutscenes (one at the beginning and one at the end) that reveal a character’s background and motivations. The game also includes both local and online multiplayer, with ranked and unranked matches and lobby search and creation. I didn’t get much use out of online play as the lobby was rather empty during my time with it.

You use two buttons for everything — even menu navigation and selection — and I hated it. L1 scrolls left, R1 scrolls right, and both together choose a mode/menu, characters, gems (boosts to meter, dive, kick, and so on), and “duds” (a character’s colors). It might sound easy to grasp and remember, but it’s unnatural and annoying as you’ll always want to use directional buttons instead.

I didn’t get to play with the fancy two-button game stick that Divekick was designed for, but it exists for serious players. Iron Galaxy Studios could have done a better job making the controls more intuitive for a regular console controller. 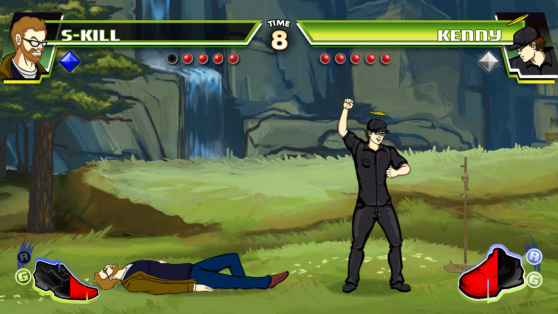 Above: Kenny, the copycat fighter, wins!

Not every one of the 13 characters looks as cool as Uncle Sensei, the former 10-year divekicking champion who wears boots on his feet and fights upsidedown while smoking. While you’re always going to encounter some boring or lame character designs in a fighting game, the variety of stages is less forgivable.

Some are cool, but others are plain, like the basketball court. But nearly all of them lack the kind of depth and detail that typically make stages interesting and unique, like moving characters or action in the background. Divekick’s levels are lifeless and practically static.

For as much as Divekick challenges the rules of fighting games by limiting the controls to two buttons and exploiting self-referential humor, it fails to break free of some of genre conventions that it could easily innovate on, like story. The illustrated cutscenes are nice, but they only tell a little about each character, and many of the endings don’t even make sense or are pointlessly inconclusive. 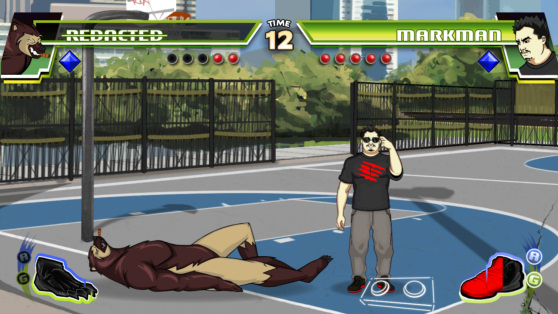 Above: Redacted vs. Markman.

A couple times during each story, the character converses with his opponent. This written dialogue is a lot less engaging than the eccentric voice-acting, and the jokes often fail in execution. You’ll find these more distracting and unimpressive than the rest of the humor, which gets old the longer you play.

Another aspect that Divekick could have changed is the almost cliché, overly hard final boss — in this case, S-Kill, who is fully powered at all times, can teleport so he’s difficult to predict, and can counter kicks using a special move that automatically one-shots his opponent. It’s less than fair, and it doesn’t have a place in a game that tries to stray so far from the norm.

Divekick is a fighting game unlike all others, and that makes it worth trying at least once. However, even the nuance that it has is not enough to sustain it. The three modes — single-player and multiplayer — are roughly identical in content, even if one means you’re squaring off against A.I. and the others against human opponents. Two-button controls just aren’t very deep, and while the game is enjoyable in short bursts, I doubt if most players will care to play extensively.