Tonight, on Diving into the Samsung app store, we’ve got: a stylish and slick racing game, a sequel to a hidden object game I’ve never played, a title that shares its name with a horrible movie, an intro to Vegas entrepreneurship, and hills so glorious they needed three dimensions.

And for the first time, I actually pay for a game. This is groundbreaking, I know. It’s just me, a couple of Samsung phones (Galaxy S6 and S6 Edge Plus), and an equally Samsung-branded tablet (Galaxy Tab S2). Let’s take a brief look and see how these mobile games stack up.

This is part seven of a continuing-until-they-stop-returning-my-emails series. Check out all previous parts (one, two, three, four, five, and six) if you want to see all that came before.

Race forever to the right in the shiny, shiny Nitro Nation 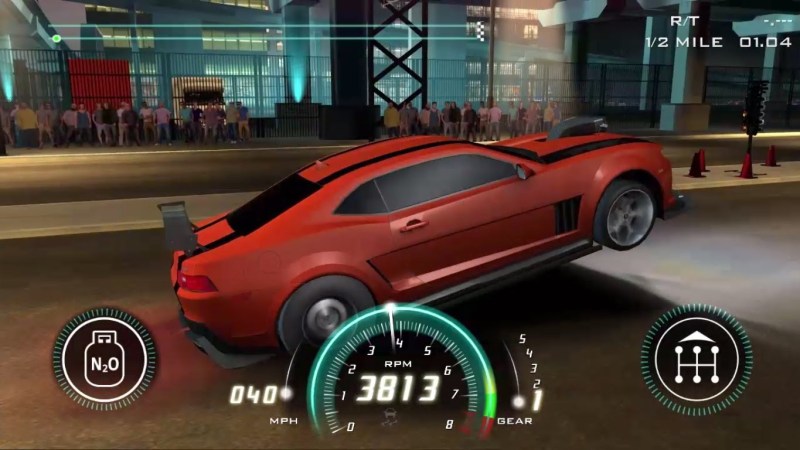 Above: Nitro Nation’s cars are more fun to upgrade than race.

It was much more engaging to upgrade Nitro Nation’s cars than drive them.

The developers have some knowledge of cars (or a halfway-decent research team) that they are eager to splash over the game’s loading screens and part upgrade menus. You can spin around each branded car in your virtual showroom and marvel at its ethereal gleam. But the enjoyment factor stalls almost complete once tires hit pavement. Races are side-scrolling timing challenges focusing on gear shifts and engine starts. It’s frantic, yes. But that energy rarely translates into any kind of enjoyment factor.

I’d much rather be a mechanic than a driver when I immigrate to the Nitro Nation. 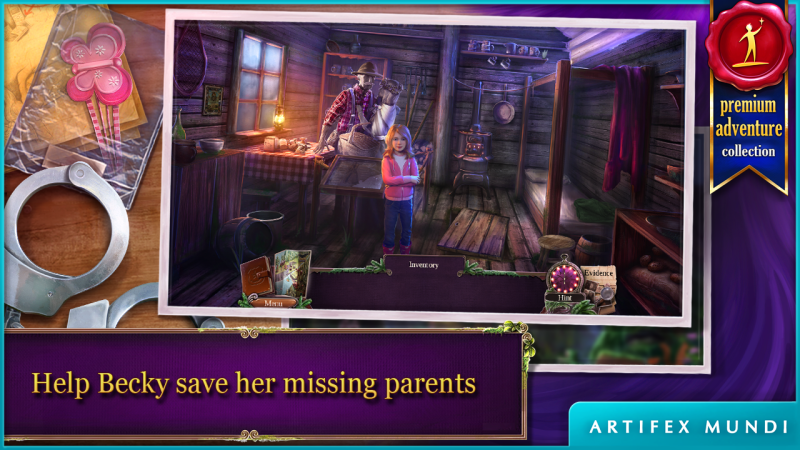 If we as an industry refer to nonsensical puzzle design as “moon logic,” then what I muddled through in Enigmatis 2: The Mists of Ravenwood (actual subtitle) is best described as “asteroid logic.”

I spent the majority of my brief time with Enigmatis 2: Hidden Object Boogaloo reconstructing a messed-up teddy bear to get a frightened child to talk to me for 8 seconds. Most individual actions made mechanical sense — find a needle to thread fabric, etc. — but from puzzle one this prologue chapter was straining so much to find excuses for me to pixel hunt that it was all I could focus on. Everything step I took felt arbitrary and cheap.

For all the objects strewn in Enigmatis 2: Enigmatis Harder’s hidden object screens, the one thing the game can’t find is a hook.

Best Played On: the fourth night of a serious case of insomnia.

Opening Boxes in The Room 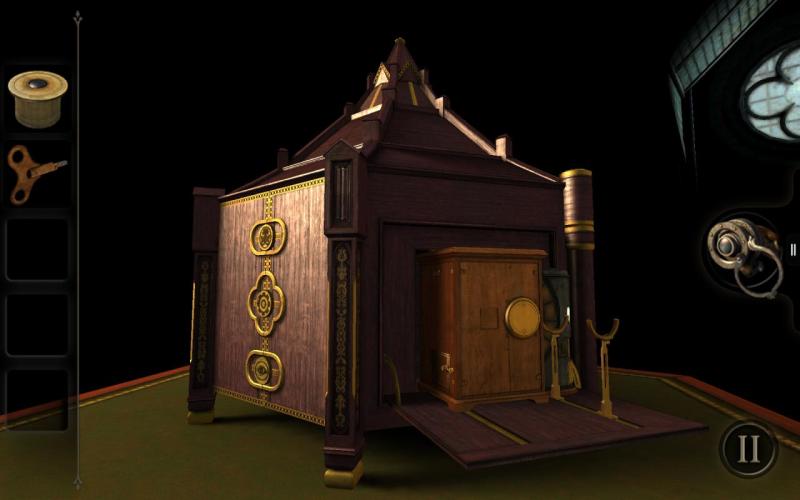 Above: The Room’s Russian nesting boxes just get more and more complex.

The Room’s lack of relation to Tommy Wiseau disaster of a cult movie is one of its many, many attributes.

A box sitting on top a table in a dark room contains a secret. Well, to be more precise, several boxes inside more boxes in said dark room, etc. The Room disregards all but the simplest premise and narrative trappings, choosing instead to focus on progressively more intricate unlocking and pictorial/numerical puzzles. You must frequently turn and shift objects like keys in order to fit into locks or make sense of a restrictive angle, further condensing and forcing your view down to the most granular of details.

The Room collapses and shrinks the figure-it-out-yourself experience of the classic Myst adventure series into a jawbreaker of a box collection. Mesmerizing in the best possible way.

Best Played On: any device you can.

Hills of Glory 3D makes with the 3D, neglects the glory 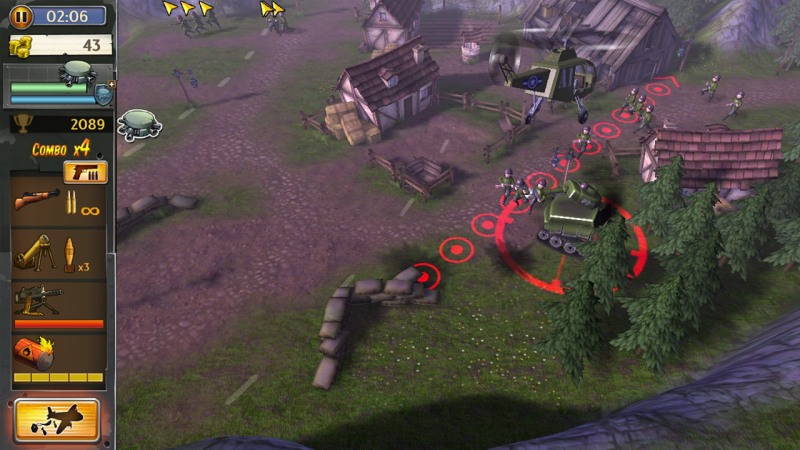 Above: Hills of Glory 3D is one of the most forgettable experiences on the Samsung app store.

Hills of Glory 3D works. After an hour of staring at this page in frustration, that’s all I can come up with. I don’t even remember if this thing had any hills or not.

You defend a stationary bunker from invading lines and crops of generic bad guys. Your arsenal increases in force and screen-tapping requirements as you level up in Army ranks at an almost ludicrous speed (four successfully missions does not a Sergeant make). The jagged 3D figures make it seem like each grunt you shoot down has a pin-up picture of ’90s Lara Croft in their jacket pocket, and the central (only?) musical theme of the game never stops droning on at the same tempo in the background.

… wait, what was I talking about again?

Best Played On: what do you mean? Were we talking about something just now? 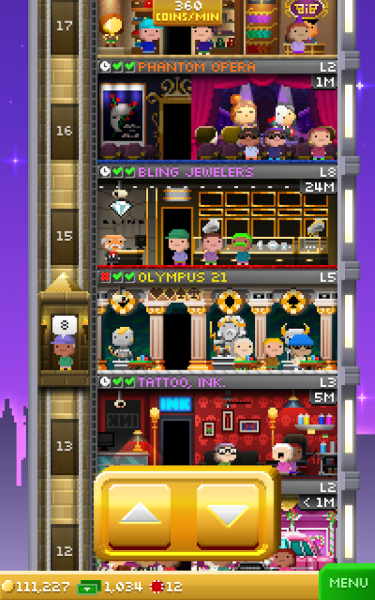 Above: It doesn’t take long for the waiting (or paying) to be force-started in Tiny Towers Vegas

I bet the Donald Trump joke in this game was a lot funnier before the first Republican debate.

Tiny Towers Vegas demands you build a casino-themed skyscraper to attract the most customers possible. Characters are adorable (especially in their multitudinous unlockable outfits) and animations bound along cutely.  But the waiting (or the paying) starts early here, with constructing new floors and hiring new staff quickly running through your tutorial currency reserves.

This is basically a virtual reconstruction of those micro playset toys housed in Barbie makeup kits or Mighty Max gadget, a bunch of whimsically tiny figures faffing about you can squint and smile at. And like those micro playsets, my patience with it lasted about as long as the flavor on a piece of cheap fruit-flavored gum.

Best Played On: the day your mad scientist friend “accidentally” switches your attention span with that of her pet goldfish.