And I am just the man to excavate it. With me, a Samsung-provided mobile crew, one tablet (Samsung Galaxy Tab S2) and two phones (Samsung Galaxy S6 and S6 Edge Plus) strong. Before me, the app store, and all it contains. Let’s head back on in.

This marks my tenth expedition into the app store waters, so be sure to refresh your memory of my previous adventures (parts one, two, three, four, five, six, seven, eight, and nine) before getting back on board!

Out-collect the Collector in Marvel: Contest of Champions 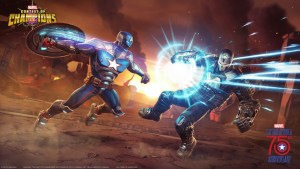 Above: Marvel: Contest of Champions is a simple, digital way to smash action figures together.

So this is where Gods of Rome got it from.

Marvel Contest of Champions, released two years prior to our previously-covered Greek god beat-em-up, sets up much of the same ground Gods would then pave over. Instead of extremely well-developed deities, players assemble their combatants from Marvel’s litany of costumed heroes and villains to duke it out in a cosmic free-for-all. You can swap out your selected team and/or upgrade them until you assemble your decided favorites. Each character is also part of a faction that grants statistical bonuses or negations based on the faction of the immediate opponent.

Characters engage in 1-on-1 battles in the single-player campaign, multiple foes in rapid succession during timed or special bouts, or against other human players online. All victories contribute to experience earned and “crystals” to unlock in-game items and more combatants. Players that don’t fork over real-world money won’t feel like they are hitting the “free-to-play wall” — where depleted in-game energy demands increasingly long wait times — too frequently. But the in-game reward system certainly feels geared toward simply facilitating more matches rather than giving players something worth investing experience into.

While it’s odd that your Champions’ roster never speaks outside of cutscenes — a particular oddity for normally talkative characters like Spider-Man — it does lend to the game’s overall action figure battle aesthetic. This feeling of smashing plastic proxies of your favorite characters together has both a good (particle effects! victory poses!) and a bad (button mashing!) side, but ultimately comes out feeling like a decently novel way to waste time. The story, which pits the Marvel universe’s obsessive cataloger the Collector in an intergalactic pissing match against the likes of Kang and Thanos, only serves to strengthen the Saturday morning cartoon sensibilities of it all.

Best played on: the Samsung Galaxy S6 Edge Plus

Keep your disposal survivors safe in the genre-mash of Walking Dead: Road to Survival 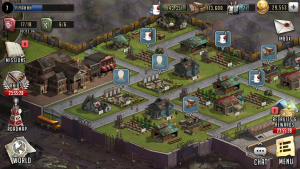 Above: Scopely combines base building, resource management, and turn-based battles in Walking Dead: Road to Survival.

Walking Dead: Road to Survival feels like someone dared the designers to just combine as many of the game tropes popular on mobile as possible into one game.

Billed as a role-playing game, this tie-in (more closely resembling Robert Kirkman’s comic book series than AMC’s more popular television show) splits your time between maintaining a survival camp, killing zombies and aggressive humans, and managing the resources required to do one or both of those previous things. Impressively, it all seems to gel, thanks to how simply each individual element is executed. Building up your camp is about placing — but mostly upgrading — buildings and frequently returning for the in-game currency they drop, and battling the hordes takes place in single-screen, turn-based battles with a few special moves and elemental weaknesses granting character’s circumstantial stat boosts. Finally, managing your very limited inventory is just a matter of swiping equipment to their optimal character and occasionally remembering to open up a menu to heal during hectic encounters.

In combination these elements fuse well enough together, albeit under a bare-bones presentation and a first draft level narrative. The binary choices the game occasionally permits the player to make are hastily implemented and perfunctory at best, only there to capitalize on the memory of a much better implementation of choice architecture over in the console and PC spaces. The simplicity works well on the platform, but unfortunately lends a sense of numb drudgery to the whole proceedings. Survivors join your base camp as figures on a number sheet, granting stat bonuses in lieu of faces. Upgrading buildings gradually improves their appearance, but it never feels like there is a next plateau worth reaching.

Ignoring all attempts at storytelling is par for the course in mobile games, and you’re best course of action should you pick up Road to Survival. But doing so removes all motivation to continue beyond extending your ability to keep playing. You sink into a rudderless drudge, a slow amble of progression for progression’s sake. It’s like you become a mindless … oh, what’s the word … husk? No. Man, it’s like the answer’s gnawing at the back of my brain.

… Oh well, I’m sure it’ll come to me eventually.

Best played on: the commercial breaks and season gaps during the show, to make all those filler episodes look good by comparison.

Settle into the quaint procedural routines of Family Farm Seaside 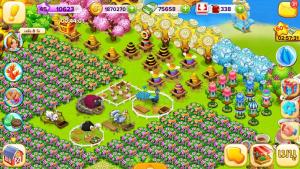 Above: Family Farm Seaside steps up its base-building game with multi-step processes and proximity benefits for well-placed crops.

Thanks to this series, I get the sense that I have tilled more soil on my phone than a modern-day farmer can manage in a year on their actual property.

So it was a genuine surprise that Family Farm Seaside not only stuck out among the throng of field hand simulators but also took some interesting steps forward. The result is by no means anything worth activating any micro-transactions over, but what it does right provides a blueprint for other similar games to pursue.

Seaside did inherit much of its look and feel from its hundreds of forebear; an endless list of crop-rearing and equipment purchasing chores need doing in a colorful, cartoon world of exaggerated character proportions. Successfully tapping and dragging your finger onscreen to perform such chores (everything from fertilizing plants and tilling soil to buying cheese-making machines and skipping wait times in menu screens) leads to more opportunities to do that exact same routine all over again, until you fill your screen with a bright and cheery food industrial complex.

Where Seaside stands out is by expanding on the concept through incremental complexity. More complicated items — bee hives, for example — demand proper placement among certain crops to facilitate pollination, and creating cheese from milk is a multistep process requiring multiple machines, item units, and timer bars to succeed. This isn’t the first game to place such additional demands on the player, particularly in the latter case, but it is one of the few to implement it smoothly. As smoothly as a gameplay loop can be while its fragmented by multiple wait times and opportunities for micropayments, at least. Seaside still suffers from the self-imposed slog that comes from its pay model, but it’s a mechanical step in the right direction. 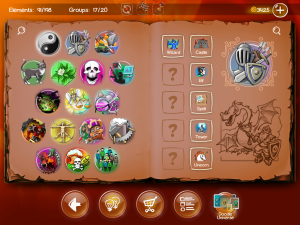 Above: In the Doodle-verse, the devil is well-versed in creating new elements and sending his minions into battle.

From the same universe (Doodleverse?) that brought us Doodle God comes the opposite end of that divine equation.

Doodle Devil, in precisely the same fashion as Doodle God — which I covered back in Volume 5 of my adventures — in His machinations, drags one icon representing a core entity or occurrence over to another in order to create the many elements that make up our world. For example, selecting Water from a list of icons and dragging it over Fire will, by divine mathematics, create Steam. Where Doodle God had you then adding these elements to an evolving world map, Doodle Devil has it go toward building an army of demons and spells for use in battles against other underworld denizens. In-game coins (or real world currency) buys you hints as to which elements combine with which. You earn coins in clumps ranging from dozens to hundreds for victories in battle or successful turns in a Doodle Devil themed slot machine.

Dragging and dropping menu items may be one of the most basic gameplay conceits I have ever come across. And yet, like my divine intervention with Doodle God before it, I found myself devoting far too much time calculating the probabilities of two elements making a match. The core flaw of both games comes from the expansion of common sense elemental patterns to include bizarre equations and downright odd “elements.” I’m not sure how Energy + Human = Wizard, and I’m downright positive “Wizard” isn’t on the periodic table. All of this is obviously done in service to a hint-based economy, where confusion is the only means of possible profit. Where Doodle Devil uniquely fails is in its battle system, which in practice involves two character portraits burping cheap post-production effects at each other while you combine two of three simple elements together for spells. It’s as vapid and uninteresting as it sounds.

Not today, Doodle Devil. Not today.

Best played on: a field trip to an actual scientific laboratory, and only if you want to see a bunch of people in lab coats get sad.

Cater a town of cardboard people in Star Chef 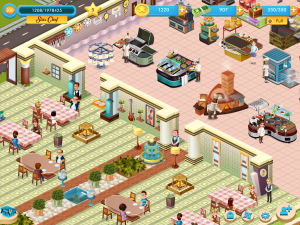 Above: Rise up through cuisines and critical ranks in Star Chef.

Vindication rarely comes in a more professional, legitimate form than a star rating for a restaurant.

And now, you can simulate that joy by feeding a never-ending horde of cardboard cut-out people in Star Chef. The hike up to the titular rating is one that requires increasingly complex recipes, which ask for more and more time-consuming ingredient prep with more and more specialized machines. As your restaurant grows in popularity, you will need to match the demands put on your decor and in your placement of your expanding garden and kitchen inventory.

Within sixty seconds of launching Star Chef I had: gained five levels, gotten three pop-up ads, and clicked through two dozen tutorial prompts. The game makes a first impression, and it makes it fast. Which is good, because it means most players will be able to exit out of this game with minimal time lost. Star Chef is in no way a wretched experience, but it provides no reason to stick with it after even a few minutes. Character art portraits have to inform you via text how much fun you are having, as if afraid that if they leave you alone you won’t know it otherwise.

Customers barely react when your waiter serves them food — which the game’s art style can’t even display in an appetizing fashion — and you can perform all of the activities more fluidly in a multitude of other games, both separately and in a similar gardening-base building-cooking combination. You are better off browsing a food’s show website while watching one of its late night re-runs for a more accurate and entertaining encapsulation of the restaurateur experience.

Best played on: the loudest volume setting, right next to the ear of a pretentious Yelp reviewer.