When mobile app developers consider the next markets, Latin America isn’t often top of mind. After all, if you look at top countries by game revenue, Mexico and Brazil come at 12th and 13th, well behind China, the U.S. and Japan — regions that receive the lion’s share of big developers’ focus.

But numbers are sometimes misleading. Let me show you.

First, Latin America is underrepresented in terms of user acquisition campaigns. We at Headway estimate, along with Newzoo’s data, that top global game developers spend less than 1 percent of their annual ad budgets in Latin America, even though the region accounts for 4 percent of the world’s total game revenue. By simply increasing ad spend to 4 percent, developers can get a big boost in the number of users who download their games.

But more to the point, Latin America is a bigger, more lucrative market than many gaming app developers realize, as seen by their low advertising budget. The key is to think of it as a region instead of a collection of nations. Mexico has 130 million people, but it’s just one country in 20 that speak Spanish. All told, there are 400 million people in the region who speak Spanish, which means it’s pretty homogenized from a marketing standpoint. Brazilians do speak Portuguese, and with over 209 million people, there are a lot of potential players there as well.

At present, despite the lack of attention paid by game marketers, Newzoo reports that Latin America boasts 220 million players (of which 44 percent have already made in-app purchases). They spend $5 billion in annual revenue on mobile, PC, and console games, making it the fifth largest market after China, the U.S., Japan, and South Korea. Mexico and Brazil are about to nab spots on the list of the top 10 most profitable countries for the gaming industry, just behind Russia and Italy.

According to Newzoo, the mobile gaming sector alone is expected to grow 19 percent in 2018, topping $2 billion. By 2021, mobile gaming will account for 51 percent of the gaming market. Considering that Newzoo predicts that 347 million people will have a smartphone within a few years, that’s a lot of potential upside for mobile app game developers.

But the biggest opportunity of all lies in the fact that Latin America has been largely overlooked by big developers, who have focused almost exclusively in the highly competitive markets of U.S., Asia and Europe. Latin America offers similar rates of engagement and steady growth, but at a fraction of the cost of media. With just that 1 percent of ad spend in the region, Latin America is wide open, and there for the taking.

What’s more, given the homogeneity of the region — just two major languages among more than 600 million people — Latin America has little of the linguistic complexity of Europe or Asia. Growth teams can easily partner with a local expert in the region and still manage global acquisition campaigns from their home country’s headquarters.

Garena, as an example, a company in Singapore that owns the app store ranks for most of the countries in Latin America with its battle royale game Free Fire, which is way below its 100th ranking in the U.S. According to App Annie, Free Fire is also the top gaming app in terms of consumer spend. In similar fashion, Tencent’s PUBG Mobile, has reached No. 2 for gaming apps in Mexico, compared to No. 20 in US. 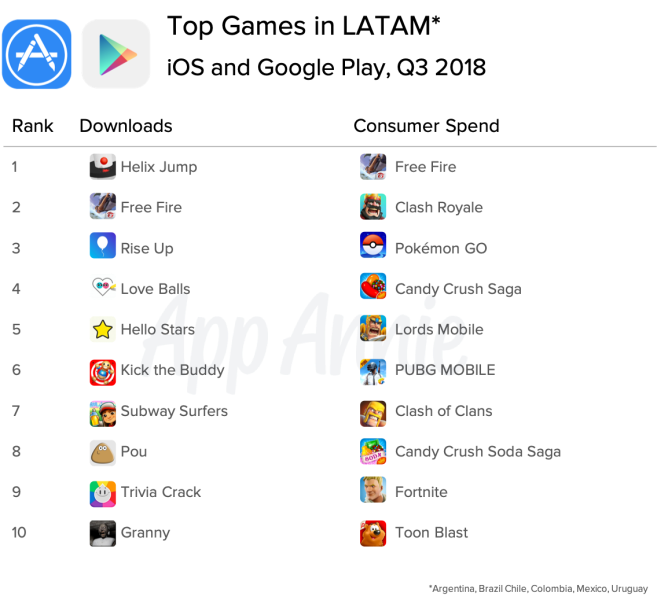 While action and strategy games have been dominating the app stores in countries like Mexico and Brazil, family and adventure games like Roblox follow similar success in the U.S. or Europe.

In an interview for our study on the LATAM gaming market, Etermax’s CRO — developer of the global success Trivia Crack — added an interesting insight: gaming apps whose business model is based on advertising, instead of in-app purchases, have a great opportunity as the audience keeps growing and more advertisers start investing on reaching a general audience that now spends more time on games than on TV.

Once a game developer enters Latin America, all of the familiar rules of growth marketing apply: campaign localization, app store optimization per app and so on. But given how prime the region is for growth, and how untapped it has been, any amount of investment is likely to deliver big returns for game developers.