Candy Crush Saga developer King is paying for Farm Heroes Saga commercials on television in an effort to boost the sim game’s mobile downloads here in the United States. Meanwhile, a game known as Piano Tiles on iOS and Don’t Tap The White Tile on Android, is the most-downloaded game for both stores.

That’s a growing trend. Big publishers like King and Clash of Clans developer Supercell are spending tons of money into acquiring players for their software. And that strategy is working … for them. But hits like Hay Day and Candy Crush Saga are rare, and most mobile developers don’t have the budget to spend what is necessary to compete. And with games like Flappy Bird, 2048, and now Piano Tiles, spending money to acquire players is potentially a waste of money.

What is Piano Tiles/Don’t Tap The White Tile?

Well, it is the most downloaded game for iPhone and Android. The simple, arcade-style release has players tapping vertical-scrolling black tiles in a variety of different modes. The idea is to tap the correct parts of the screen as fast as you can, and that’s about the extent of the mechanics. The “Classic” stage wants to see how fast you can tap 30 blocks, and “Arcade” gives you the chance to continue for as long as you can avoid the dreaded white spaces, but that’s it. 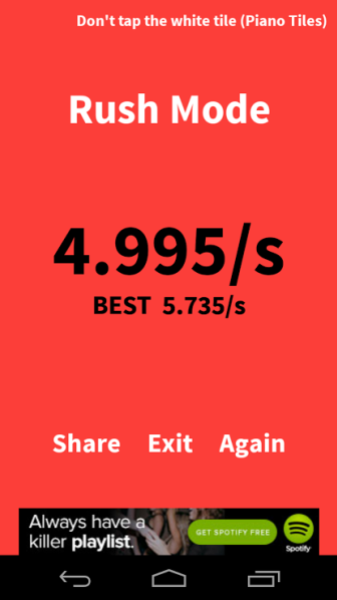 Above: You should try to beat my scores!

Piano Tiles embodies everything about the kinds of stuff that is bubbling up on mobile recently. Like Flappy Bird, each match of Piano Tiles only lasts for a short amount of time. Like 2048, it has an incredibly basic visual style. Like both games, Piano Tiles only really has players performing one gesture action, and it is free. It also lacks any in-app purchases.

The app is performing well. In fact, more people are downloading Piano Tiles on iOS and Android than Clash of Clans or Candy Crush Saga. Those may make a lot more money, but they also have huge development teams. Umoni Studio, the developer responsible for Piano Tiles, doesn’t even have an official website.

What this says about mobile gaming

That apps like Piano Tiles and 2048 are taking over the top of the download charts while Angry Birds studio Rovio’s profits take a nosedive is potential evidence of a couple of possibilities.

For one, it could mean that big publishers have no idea what gamers really want. After all, Flappy Bird and 2048 seemed to come out of nowhere. They also lack a certain amount of polish and production values that mobile publishers often put into their releases. And smartphone owners don’t seem to care.

“We have no idea that games like [Flappy Bird] are going to be a hit,” chief executive officer Jude Gomila of the social-discovery platform HeyZap told GamesBeat. “Predicting right now is about recommending apps and games [on a personal level], but I don’t know how, today, that anyone would be able to predict the next Flappy Bird. I think the industry is probably way off from that. Probably like five years.”

On the other hand, it’s possible that the business models that are common on mobile prevent big developers from pursuing many of these gameplay concepts. For example, 2048 is actually a clone of 1028, which is a clone of the premium priced Threes. While 2048’s developer is satisfied with collecting whatever it makes from advertisements, Threes isn’t even in the top 500 highest-grossing on iOS in the U.S. It’s also not a game that would work with microtransactions.

Perversely, a big company like King probably couldn’t afford to waste money-making something like Threes or Flappy Bird … at least not without ruining their purity with “spending opportunities.” At best, those publishers could use a game like 2048 to draw in users that they would then try to move onto another game that features monetization.

“I think it’s OK to have a game that is bringing in users and building a brand,” said Gomila. “If you have another game that has a high monetization, then it’s also a good idea to cross promote with a game like 2048.”

While that makes sense on the surface, the out-of-nowhere success of these games might suggest that the market doesn’t fully work like that.

Piano Tiles and 2048 (and Flappy Bird before them) are getting huge download numbers. They’re getting more downloads than a lot of the stuff from developers that are far better established and more capable of the aforementioned cross promotion. This reveals that maybe having a lot of players today doesn’t necessarily mean you’ll have a lot tomorrow.

A big idea in social and mobile gaming is the publishing network. It’s the concept where a developer or group of developers under a publisher release games that cross-promote one another. That didn’t work for Zynga on social, which has lost around half of its monthly active users (MAUs) over the last year, and it doesn’t look like it is working for Rovio as well.

The Angry Birds company had 263 million MAUs as of January 2013, but that didn’t help Angry Birds Go. That kart racer debuted in December, but it already looks like a failure. Despite the millions of people in Rovio’s network, and that Angry Birds Go is a free-to-play app with microtransactions, it’s the No. 250 most-downloaded iPhone game in the U.S. just four months later.

The point is that mobile developers don’t always know what leads to success, and the publishers that are making hit after hit (like King) might avoid making certain kinds of games that people will love because those ideas don’t make enough money with the established business models of the day.