Donut County is a crazy video game where you position a donut hole under objects and they fall into it. The more items you collect, the bigger the donut hole becomes until you can suck whole buildings into it.

It reminds me of the Keita Takahashi’s zany 2004 video game Katamari Damacy, where you roll a giant ball over a bunch of objects and collect them as they stuck to it. When I first saw Ben Esposito’s Donut County at the Electronic Entertainment Expo (E3) in 2017, it made me laugh. Now it debuts tomorrow on the PlayStation 4, Steam, GOG, Mac App store, and the iOS App Store.

I’ve played the PlayStation 4 version, and it took me a couple of hours to get through it. It’s quirky, with a funny story about raccoons who try to take control of a county by monopolizing the trash of all the other animals and swallowing everything in the landscape with a donut hole. Esposito, a Los Angeles developer who was previously a level designer for The Unfinished Swan and What Remains of Edith Finch, spearheaded this wonderfully creative title. Esposito is also cofounder of Glitch City LA, a collective and community space for indies in Los Angeles. It shows once again that many of the most creative titles in gaming spring from a single mind.

Once Esposito showed what he could do, Annapurna Interactive came in to finance the title and get it onto more platforms.  Annapurna Interactive is a division of Annapurna Pictures — which is run by Megan Ellison, daughter of Oracle founder Larry Ellison — and made movies such as Her, Zero Dark Thirty, and Detroit. It also backed Gorogoa, an artistic indie game where you zoom into paintings.

The idea that a major Hollywood company could back a game made by an indie developer is a recognition of the creative risks that indies can take. 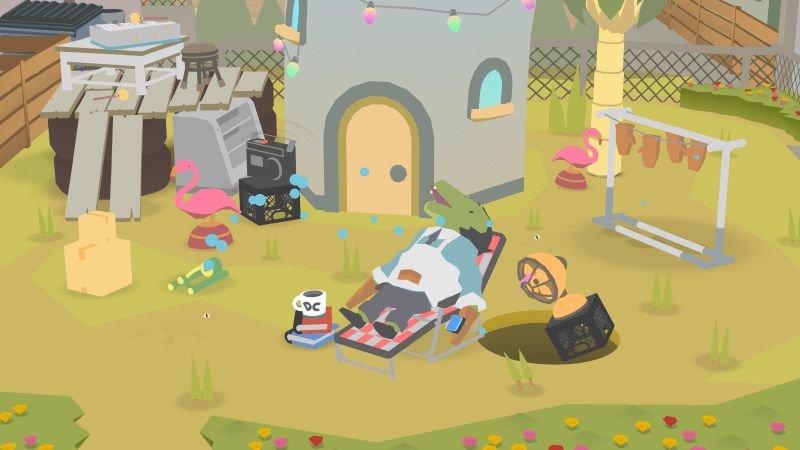 You start out in the bedroom of a girl named Mira. Then, you get outside and start moving the hole around. As it swallows things, the hole grows bigger. But you encounter a limited number of objects, and you have to make sure that you swallow things in the correct order. Otherwise, the hole might not be big enough to swallow the very last item. You keep doing this, with some variations on the theme, for about 10 or so levels.

A cute story about donuts, raccoons, and trash

Mira is a donut shop worker who gets a mysterious delivery from some raccoons. It’s a box of donuts that opens up holes all around the county. When you swallow everything in a scene, the point of view shifts to 999 feet below ground, where a bunch of animals gather after they’ve been swallowed. They chatter a bit, and then, you move on to the next scene. With each scene, you realize that the raccoon B.K. is like some bad person that you know, always looking out for No. 1. Mira gets annoyed with B.K., who only cares about getting enough trash to trade in for a quadcopter. Each new chapter is about an animal’s encounter with the annoying raccoon.

It takes a twist

When you get to the mansion of the trash king, or head raccoon, the gameplay changes a bit and you have to solve some puzzles in order to reach the end of the story. Since I had been swallowing so many objects, this shift in gameplay was a welcome change. It’s not that hard

I played the game through in a couple of hours and had to repeat a level once or twice. The final boss fight isn’t easy, but after you fail the first time, the characters tell you how to beat it the next time. And, in fact, I beat the boss level on the second fight. Donut County is designed as a casual game for players who don’t have much experience with video games at all. But it certainly could have been more challenging.

Of course, we knew that going into the game. And you can see this as either a good thing or a bad thing. After all, you can’t play a single game mechanic for hours and hours, unless of course you work at Namco and you’re trying to milk a franchise fall all it’s worth, as happened with the Katamari games. Fortunately, the price tag for the game is also small, at $13.

The story was kind of wacky, it made me laugh, and it had a kind of moral to it in the end. It’s not heavy moralizing, but it makes you think about whether you really should be tossing out so much trash for a donut hole to collect. I wished the story was longer and the game had more things to do besides capturing things in a hole. But the story was lighthearted and the gameplay was fun. If you don’t have high expectations, I think you’ll find Donut County is a nice diversion.