Donut Lab has raised $2.3 million in a new funding round for its Kids vs Zombies mobile shooter.

The game is an example of taking something potentially violent and serious and transforming it with cartoon art so that it’s suitable for young folks to play. The game has already been soft-launched in several countries, with a global release expected early in 2022.

“Last year, we were thinking that we were very close to launch,” Raiter said. “But then we decided that it wasn’t ready yet because we had this system of characters, where you need to combine characters with different weapons and different perks. It was like too complicated. And we decided to make the game simpler. We completely updated the all character system. Now we have 10 amazing characters. It’s a completely different game from what it was a year ago.”

The backers include European gaming fund Level Up; Sergey Kovalenko, cofounder of Braavo; Flyer One Ventures; Joint Journey; Dima Morozov, founder of Green Day; and angel investors. Donut Lab has raised $4.4 million to date. Raiter said the company had negotiated a second round but then the lead investor backed out. So the company went back to fundraising and secured the current round.

Above: The Donut Lab team

“The game is more mature, and the characters are a bit older,” Raiter said. “We did that based on feedback from the market.”

The game expands the concept of mobile shooters, relying on a combination of player-versus-environment (PvE) gameplay with nonlinear player-versus-player (PvP). Players fight mob zombies, trying to avoid traps from their rivals who are other human players. The company said that battles acquire tactical depth without losing dynamics.

At the heart of the game, there are unique characters that reflect the diversity and vibrancy of pop culture. The main enemies in the game — zombies, on the contrary, embody despondency and mediocrity, relying on recognizable images and problems of modern society.

The creators believe that the satirical note will allow Kids vs Zombies to establish closer contact with the audience, form a strong community and respond quicker to events happening in the world — things that other mobile games are generally unable to do. In the post-covid world, the need for communication from users has increased significantly, and game developers are striving to address this demand, Raiter said.

Earlier, Donut Lab received funds from Wargaming, Level-Up, founder of Braavo Capital and several angel investors. The company managed to maintain the pace of development during the pandemic, and at the time of the soft launch, the game featured 10 characters, three modes with different rules and a battle pass system. Retention on the first day reached 55%, and the conversion to payments was at 5%. 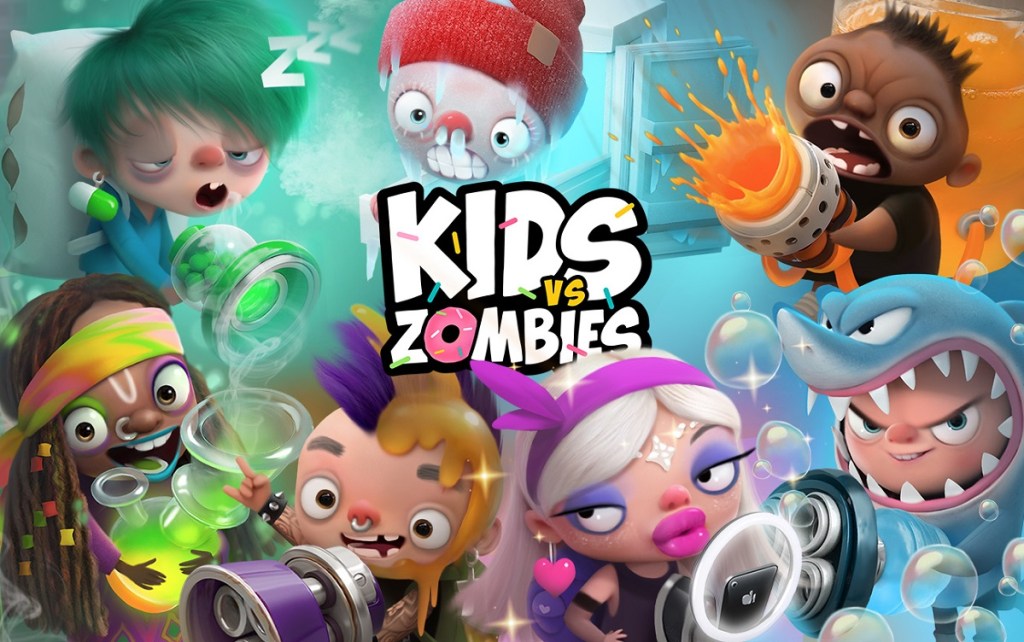 Above: Kids vs Zombies is a mobile shooter coming in 2022.

Donut Lab’s experience became a unique in many ways, as the company managed to attract investment without the support of a publisher and the game being fully released.

The company is building its own publishing department in order to release products in the mid-core segment in the future.

The funds raised will allow to move to the next stage of development, introduce advanced leveling and PvP mechanics into the game, as well as significant content updates with new characters.

The team started working on releasing the characters on TikTok, but the videos didn’t get traction. A young woman who worked as an office manager volunteered to help them, and her results were much better. She managed to get 15 million views on TikTok. The most popular character was Soda Pop.

“She spent a couple of hours on it and got a great result,” Raiter said. “The game we have today is much deeper and more interesting to play.”

Donut Lab was founded in 2018 by Andrey Gordeev, Raiter, and Vitaly Urban. Before that, they already had experience working as a team on the BeUnicorn project. Gordeev was also involved in the Green Riding Hood game development, and Raiter and Urban founded the service Hello Baby. Those titles have been awarded Apple’s Best App of the Year.

The technical director of the game, Mikhail Balabanov, is a Candidate of Sciences in physics and mathematics. He has 12 years of experience behind him, including server-side programming, technical team management, and risk management. Mikhail’s portfolio includes four mobile and two server-side games.

Lead game designer Denis Kholodov previously worked for New Media, Wilpo, Try 2 Games, and Playneta. Denis’s decisions led to an increase in ARPU by 111%, and R1 and R3 in some projects went up by 1.5 due to changes in game design.

In addition to experienced employees, the team has many talented newcomers and 35 team members working on Kids vs Zombies.

The game will be self-published. The beta is available on Android only and it will soft launch in Canada later this month on Android. The iOS version of the beta will be available early 2022.