I owe Dean an apology.

At the beginning of the year, everyone at GamesBeat talked about which games in 2016 we were looking forward to the most. When our lead writer, Dean Takahashi, said Doom (which is out now for PlayStation 4, Xbox One, and PC), I laughed at him. A simple shooter like Doom? In 2016?

Pfft! Who cares! For me, Doom was a product of ’90s. I give it credit for its innovations, but I have no great love for the franchise. If I want a shooter these days, I have an almost infinite amount of options, such as Call of Duty, Halo, and Far Cry. Can a simple game about shooting demons on Mars compete? Even with the original developer, id Software, back for the sequel, how can this franchise possibly become relevant again?

About 10 minutes into the PC version Doom, I was having a blast — and I felt like an idiot. 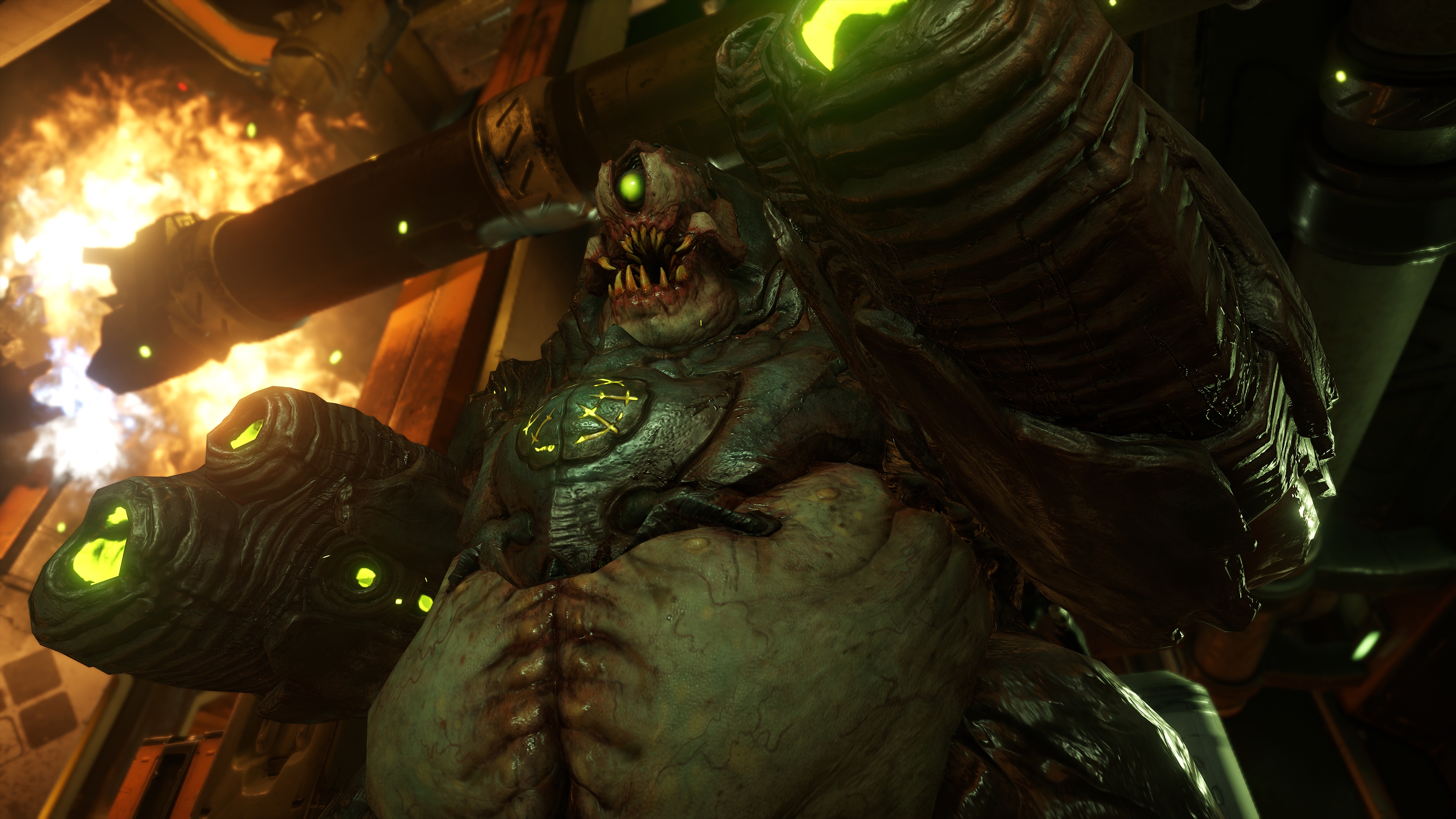 It’s fun without taking itself too seriously

I was not a fan of 2004’s Doom 3, the last major installment the series. Like this new Doom, that game retold the plot of the original (demons are attacking a station Mars, oh noes). But Doom 3 took itself seriously. It edged closer to horror than action, and it was slow and heavy on story.

The new Doom takes the opposite approach. The story elements are minimal, and it has you shooting and killing demons as soon as you start. It’s fast-paced and full of action. It winks and nods at its audience, and some lines, especially a computer voice warning that demonic presences are at “unsafe levels,” make you know that this isn’t a game that’s going to try and freak you out with cheap jump scares.

Doom’s combat is a blast. You never need to reload your guns, and hiding behind cover won’t regenerate your health (as it does in most shooters these days). This encourages you to engage foes, moving to avoid fire instead of taking hits and using a break to heal up.

And unlike a lot modern shooters, you can have more than two weapons on you at a time. It’s another old-school design choice that actually makes Doom stand out. It’s great to run around, switching from a shotgun to a pistol to a chainsaw whenever I wanted, never having to hide behind a box for 5 seconds because I was low on health. Fights never suffered from downtime. 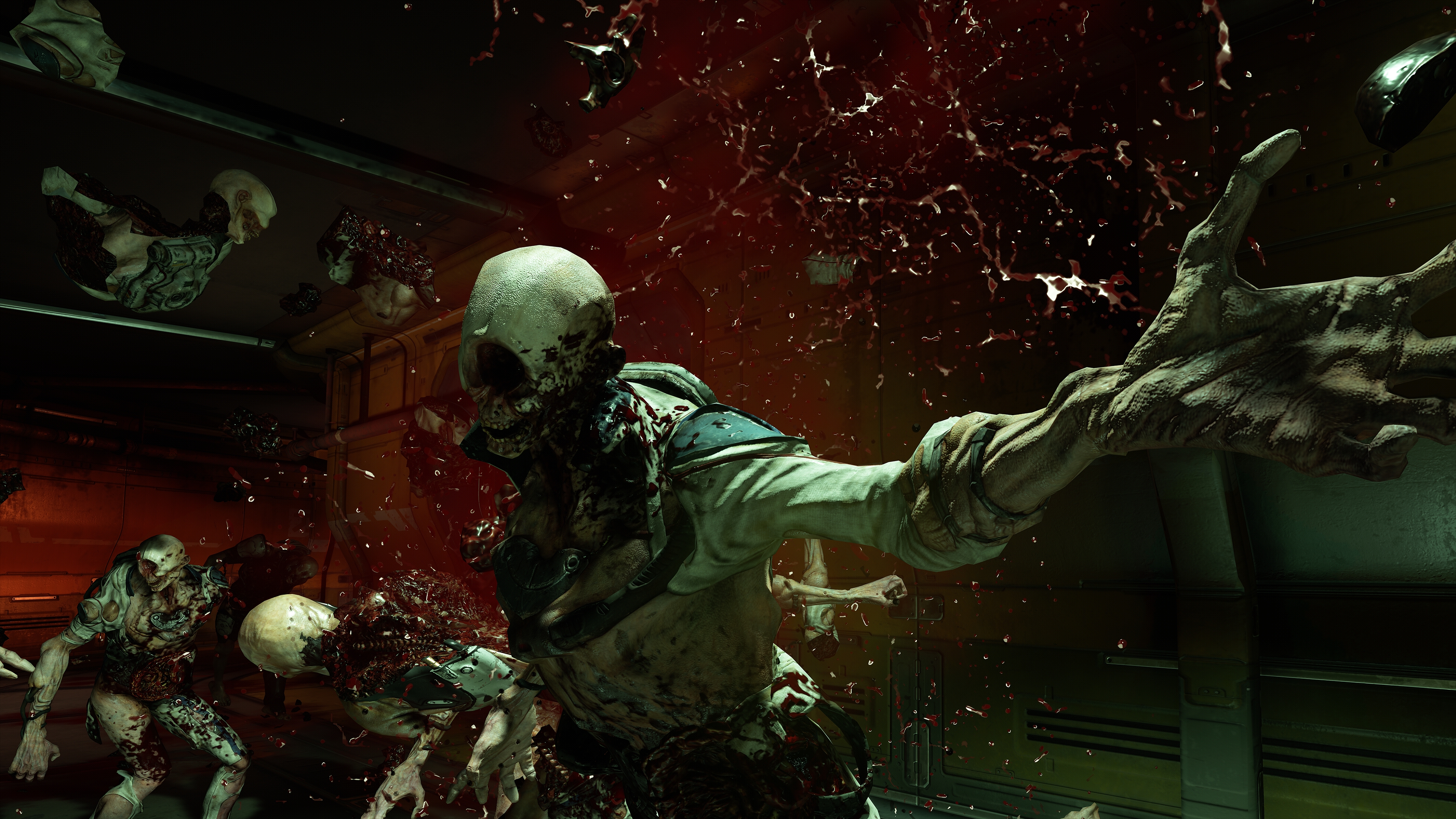 It’s not all retro. When you deal enough damage to enemies, they’ll begin to stagger and glow. If you melee attack them during this time, you’ll kill them with one hit. Not only are these attacks fun, but these Glory Kills can give you more health. They can also help you save ammo, and … well, they just look cool!

Oh, that chainsaw I mentioned? While it’s fun to tear through demons with it, it serves a greater function. Kills with the chainsaw will always drop ammo. However, ammo for the chainsaw itself is rare. So don’t just use the thing on a whim. You only bring it out when you’re running low on ammo for your other guns. All of these mechanics give the fast-paced action nuance.

Your average shooter today is linear. You run down a specific path and shoot enemies that pop up in front of you. Here, Doom takes another cue from the ’90s. Its levels have multiple paths, rooms, and secrets.

I’m not opposed to linearity. It can help foster a cinematic experience, but it can also make action feel like less than a glorified shooting gallery. In Doom, you need to explore. Just like in the original, you’ll need to find card keys to help you get through security doors.

While this means you need to do a little back-tracking, it gives you more opportunities to hunt for secrets. These include items like little figurines that resemble characters from the first Doom, but you’ll also find hidden areas that look and sound just like the original (low-res textures and all). Discovering secrets can also help make your character stronger. 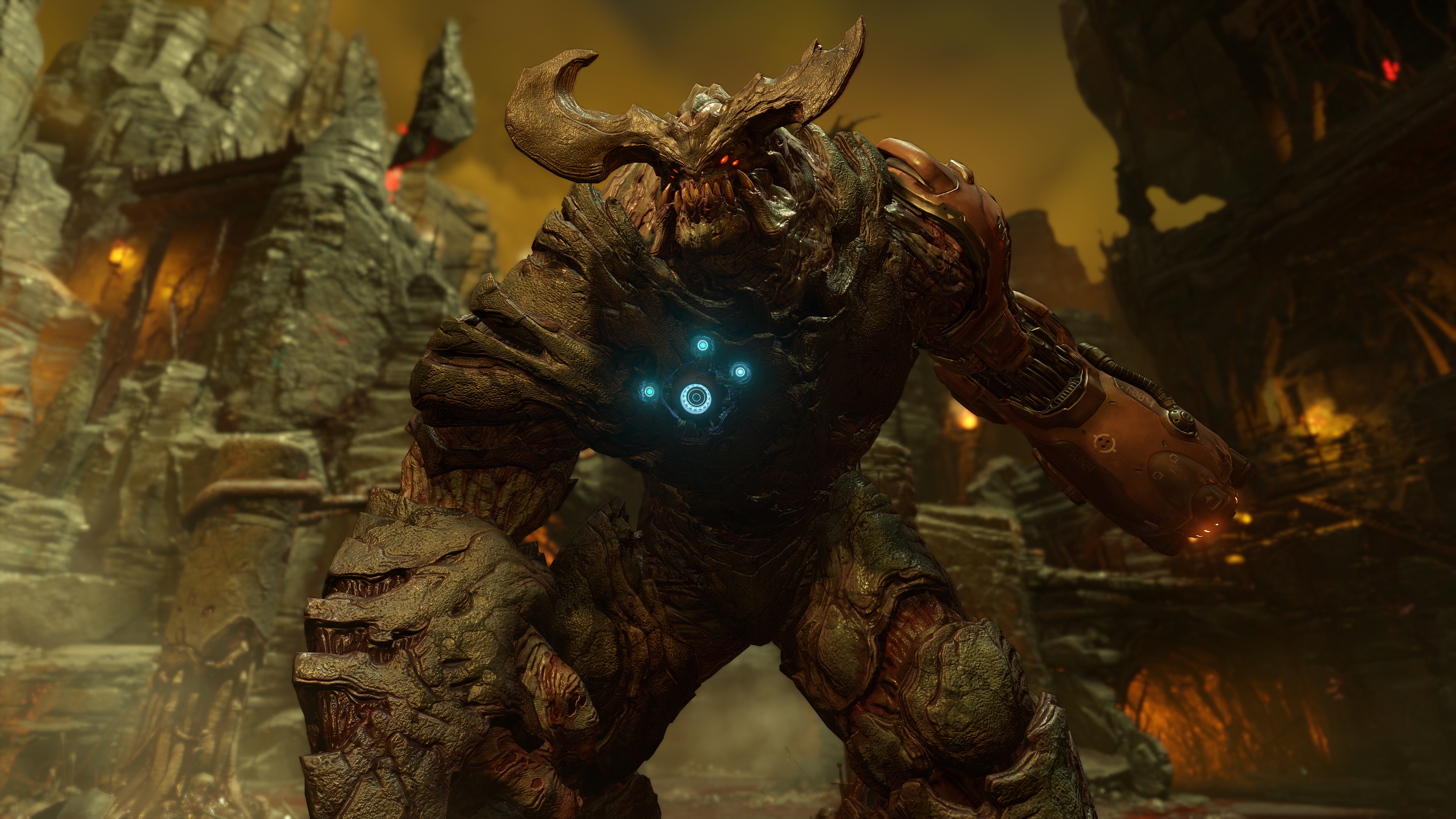 You can unlock new abilities and bonuses for your guns and armor. Again, unlike modern shooters, you don’t earn these buffs by earning experience points and levels. Instead, you complete challenges in each stage. For example, you might have to kill three demons with one exploding barrel or find three secrets in one level. You’ll also find corpses of other marines that give you another point to put toward a new ability.

I love that Doom’s progression system rewards players for exploring more than for just killing hordes of monsters. Of course, doing that will still help. At the end of levels, you’ll earn even more attribute points based on how many demons you destroyed. Still, if you really want to unlock every ability, you’ll have to scour each level.

Doom’s multiplayer is another fun mix of old and new. It’s emphasis on Team Deathmatch gameplay will feel familiar to anyone who’s played a shooter online in the last 10 years. You also unlock new weapons and other goodies by leveling up your account through playing matches, and you play with different loadouts (or eventually make your own) that give you two guns and a piece of equipment (like a grenade).

However, Doom doesn’t force players to hide and restore health when they’re close to dying. Instead, you’ll need to search the map for health pick-ups if you want to stay alive. This might sound like an archaic design decision to some, but it actually feels fresh again. It keeps players on the move, since they can’t just stand around the same spot and use lazy tactics (attack, regenerate health, repeat).

Also, a special power-up will spawn during matches that turn players into powerful demons. It helps direct players to large team brawls, since everyone will fight for the chance to become a hellspawn that can drastically improve your kill-death ratio.

The maps feel repetitive. Most of them are just corridors of red rocks and caves. Some take place in more sci-fi settings (inside Mars stations), but even these depend on a lot of reds, oranges, and browns. Even in my head right now, the game has two maps: Mars station and Hell. I know it has more than that, but I can’t distinguish them.

The multiplayer doesn’t have lasting power

As much fun as I initially had with the mutliplayer, I don’t feel a huge desire to go back to it. Part of that is bad timing. Another reason is that it doesn’t feel as old-school as the campaign. The loadouts, character progression, and unlockable items make Doom’s online offerings feel more like a Call of Duty clone, even if the demon-transformations and fun guns make it stand out a bit.

I have little to complain about regarding the single-player campaign. It’s a fun shooter that brings back aspects of classic design (like health packs and sprawling levels) that I didn’t realize I missed so much.

The multiplayer doesn’t make as much of an impact. It feels safe compared to the unapologetically old-school campaign. Still, it’s a fun bonus for one of the most exhilarating, chaotic shooting experiences I’ve had in a long time.

Doom is out now for PlayStation 4, Xbox One, and PC. The publisher sent GamesBeat a PlayStation 4 copy for the purposes of this review, but we decided to review Doom on PC instead.