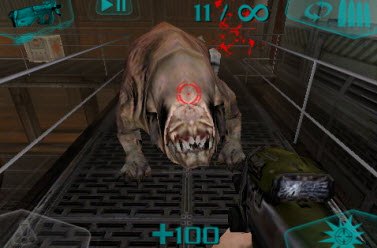 For hardcore gamers, the iPhone hasn’t had much to offer. The games are mostly light-hearted, casual games that you play when you need a short distraction. They’re also a big compromise compared to what you can play on traditional game platforms.

But Doom Resurrection is changing that. It’s the first authentic hardcore game on the iPhone. Much like Social Gaming Network’s aerial combat game, F.A.S.T., Doom Resurrection lives up to my expectations for a next-generation iPhone game. Game developers may have to match this kind of game play in order to make popular games on the iPhone.

Doom Resurrection is selling for $9.99, far more than the average $2 price for a paid iPhone game. If game developers can consistently produce high-quality, higher-priced games for the iPhone, then the profits generated by the iPhone might truly threaten the profits of Nintendo DS games, which cost $20 to $40. It will be interesting to see how long Doom Resurrection can sell at the high price and still rank high in the AppStore. 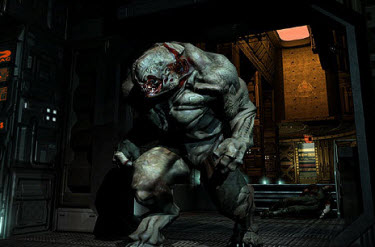 The experience of the game is so visceral that you almost forget you’re playing it on a phone. It’s intense, addictive, and full of blood-soaked gore.  Your palms sweat as you try to fire your weapons at demons and dodge the flaming balls they throw at you. I finished it in a few nights, but it commanded my attention for hours, not just five minutes at a time like most mobile games. And thanks in part to the pretty 3-D art, it’s easy to get lost in the game and forget your surroundings.

The plot is basically like the rest of the Doom video game series — you’re a space marine fighting demons who mysteriously appear in a Mars research facility when scientists open a portal to hell. John Carmack, technical director at id Software, worked with a half dozen people at Escalation Studios to create the game over six months. They used artwork from the original PC game, Doom 3, which debuted in 2004. But the art is “down rezzed,” or shown at a much lower resolution and thus isn’t nearly as sharp.

I felt nostalgic playing the game, but it’s not the same as Doom 3 (pictured above), which in its day was one of the creepiest and most exhilarating games on the PC. The creatures were loud and scary. You never knew when one was going to leap out of the darkness at you.  Doom Resurrection is just as violent and bloody. But it isn’t as pretty as Doom 3 itself, which had more lighting effects such as shadows moving as a light bulb on a wire sways back and forth. So the element of fear carries over from Doom 3 somewhat, but not fully. 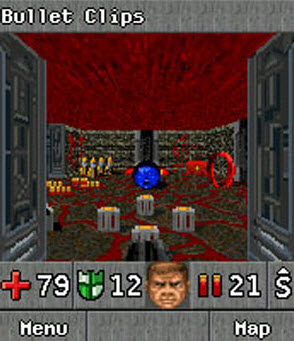 On the other hand, I don’t consider the quality of the graphics to be a disappointment. Consider, for instance, the cartoon-like art from id’s Doom RPG (right), which debuted on older cell phones in 2006. Can you imaging being scared in a game with demons that looked like a bunch of Lego characters? And the gunfire in these games sounded like variations on the bleeps or bloops of classic video games. The quality of the iPhone graphics and sound shows you how far we’ve come in just a few years.

The major difference from a traditional shooting game is that Doom Resurrection runs on rails. That is, you don’t get to roam free through a 3-D level. Your camera viewing angle is tightly controlled, sort of like how you ride on the rails through the Haunted Mansion ride at Disneyland. Your character moves automatically through the 3-D space until you encounter an enemy. Then you’re free to aim at whatever creatures are before you. To fire a gun, you tap the lower right corner of the screen. Although the game is difficult, the controls take into account that playing a game on an iPhone should be an easier experience. The game takes advantage of the iPhone’s user interface.  For example, you use the accelerometer to aim, meaning you move the cross-hairs onto targets by tilting your iPhone in various directions.

You might think you’d lose a lot by not being able to roam freely, but putting the game on rails is a reasonable design choice given the limitations of the iPhone. It’s just too hard to control movements at the same time you’re controlling your aim with just your fingers tapping on a screen.

You scroll through weapons with a single tap on the screen. Your choices range from a machine gun for light targets to a BFG (initials for big f…ing gun) that wipes out everything but runs out of ammo fast. There are four levels of difficulty. So newbie players can tackle the game at the easier recruit level, while hardcore players can fight at the Marine, Veteran or Nightmare levels. Putting in so many levels of difficulty is a good move because it makes the game more accessible. 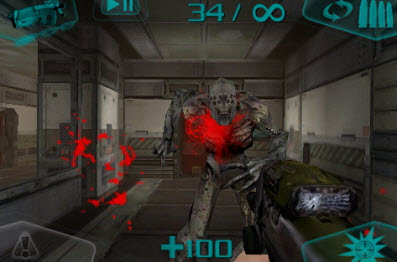 The game play is fast. You have to tap the screen to collect hidden objects, health reloads, and ammo. If you’re going too fast, you might miss them. Then you have to make sure that you dispatch your enemies as fast as possible, using the right weapon. The challenge comes when two or three of the enemies come at you at once, which means you may have to switch weapons fast. You constantly have to reload by tapping the upper right corner of the screen. You can dodge flames or hide in cover by hitting the lower left corner, and if a zombie grabs you, you can shake the iPhone to get free.

It’s best to play it with headphones to get the full audio effect. Also, the sounds of gunfire and screaming demons will annoy, and perhaps freak out, anybody sitting near you. There are eight levels to the game. Six are set in the Union Aerospace Corp. mining facility on Mars. I would rather have spent all eight of the levels on Mars. Two of the levels take place in Hell, which isn’t all that pretty. In fact, the scenery of Hell (below) — which you get to by falling through some orifice-like portal — looked fairly laughable to me. 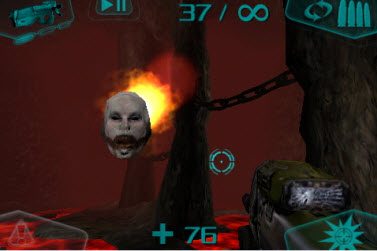 Certainly, not everything is next-generation. The story unfolds through text-based still frames, sort of like a comic book. While the music sets the mood, it would be far better if there were more video scenes or spoken words. That’s clearly a limitation of the mobile platform. But over time, with new models such as the iPhone 3G S and whatever comes in the future, iPhone games will truly cross a bridge and deliver these elements as well. Meanwhile, Doom Resurrection runs fine on the iPhone 3G. There are only occasional slowdowns in the action because there is too much happening on the screen at once.

If you’re not occupied on the Fourth of July, it’s worth becoming a space marine and doing your patriotic duty by mowing down a lot of demons. It’s a great way to entertain yourself during the slow summer weeks when few console games come out.