The sky is falling once again.

The Nintendo 64 classic from 2000 has been revamped for the newest handheld, the New Nintendo 3DS XL. It saw a rerelease on the Wii Virtual Console a few years back, but this new version is a true remaster, coming with several graphical and gameplay enhancements.

While it’s easily the weirdest and creepiest Zelda game, Majora’s Mask deserves its cult following. Its tone, setting, and recurring-day gameplay are unlike anything else Nintendo has done with the franchise.

Let us welcome the end of days once again. 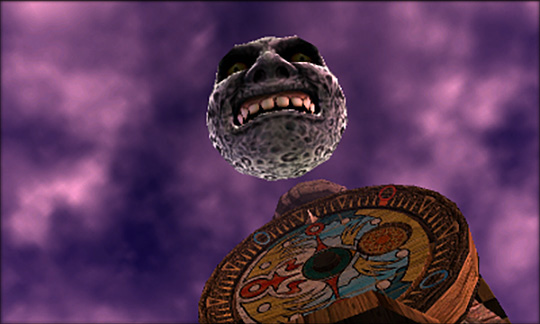 The moon will come crashing down on Termina in 3 days.

Though you’re out to save the world as Link in Majora’s Mask, this classic is much less about running around being a hero and more about slowing down and taking time to listen. Its time-looping gameplay has you using a special ocarina (yes, the Ocarina of Time ocarina) to turn back the clock to do everything possible to prevent the moon from crashing into the Termina. Rather than fighting, you’ll spend most of your time peeking into the lives of others in the mysterious town of Termina, learning their habits, and becoming their friends. In the end, Majora’s Mask is about saving people you’ve come to know and care for.

Running around in the Zelda version of Groundhog Day in a little town is more interesting than you might initially guess. Reliving the same 72 hours gets increasingly complex as you uncover more secrets from the citizens of Termina. Along with time control, Link uses the power of a variety of special masks that allow him to change into different beings or gain special powers to sort out the many puzzles he faces. Through these, Link gains new types of mobility that allows him to gain access to unexplored areas. Each time the clock resets, Link starts the loop again with the knowledge he has uncovered as well as new masks, weapons, and other key items.

Enough do-overs has Link uncovering four temples that he must clear to save the world from doom.

Even some 16 years later, Majora’s Mask is one of Nintendo’s most ambitious works. Its intricacies and odd charms make for a loop that you’ll be happy to restart.

Majora’s Mask is a different kind of Zelda, making for a treat for series fans. Nintendo mixed relatively new 3D action with some interesting twists on time-based gameplay to make one of the freshest games of that era. Surprisingly, Majora’s Mask still seems original today.

It’s also the darkest take on the franchise. If the slow descent of one of the scariest moon faces ever placed in a game wasn’t scary enough, the odd, dream-like situations Link finds himself in will haunt you. Even more than a dozen years after playing the original, seeing that Link seems to be the only person in Termina that cares that the world ending in three days still creeps me out. He’s the only one with a sense of urgency, running around in a town where everyone else seems oblivious or in denial. Now that I’m older, taking a step back from story missions and looking at the world shows just how dark and eerie it really is.

For fans into series lore, Majora’s Mask is a treasure chest of curiosities. While its setting and characters are unique, they’re reminiscent of those from other Zelda games, but scrambled, like in a dream. To try to make real sense of what is happening in Majora’s Mask in terms of Zelda’s lore is like a game in itself.

Majora’s Mask works fine with previous 3DS systems, including the 2DS, though camera manipulation isn’t near as easy as it is with the new system’s control options.

It’s a good fit for the launch of Nintendo’s New 3DS XL, as it makes for a great showcase for the portable’s new C-Stick analog nub. I can’t think of a better way to put camera control through its paces than a third-person Zelda game — especially one from the Nintendo 64 era. I’m pleased to say that it passes this test — Majora’s Mask holds its own against modern action-adventures. It worked so well that it was easy to take for granted that the original didn’t feature full camera control.

Being able to freely look around really opens up Termina. This world and its strange inhabitants deserve to be watched.

Battles also benefit from the C-stick, especially when it comes to bosses. Having full control over the camera lets you focus on the fight and not fiddling with your angle of approach. Major’s Mask shows its age in combat without this camera control, but it holds its own against modern third-person games with it. Not bad for a game originally released in 2000. 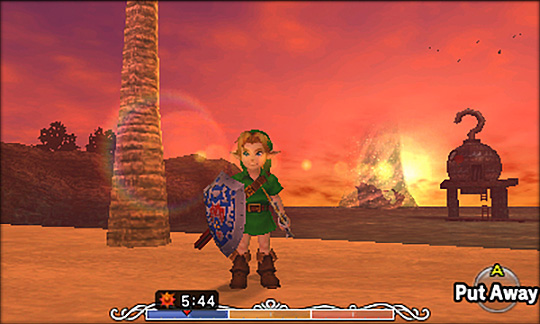 Above: Pictures don’t do Majora’s Mask 3D justice — and they don’t convey how well the 3D works.

You can appreciate Nintendo’s 3D work on Majora’s Mask on any of its family of systems, but the eye-tracking features of the New 3DS made it so much easier. Nintendo’s “super stable” tech works so well that you can leave the 3D slider up, with no worries of eye fatigue or headaches. The tracking even works with this version’s optional motion-sensing aiming system, keeping the 3D locked-in even when tilting the New 3DS around.

You’ll want to keep it on as the 3D really does something to this old game. It brings out its charms and somehow draws you in. Nintendo tinkered under the hood to enhance Majora’s Mask’s visuals and it definitely shows. Though much smaller, Termina looks sharper and cleaner on the 3DS. Edges are less jaggy and textures seem to have more detail.

A new save system

Aside from the larger modifications of the original, Nintendo went in and tuned up some of the dated systems, with the world map and Bombers notebook seeing upgrades. All are greatly appreciated. But the easiest one to appreciate is the simplified save system. Simply stroll up to any of Termina’s owl statues and press a button to instantly save your progress.

This upgrade also lets you manually jump to a specific time of day instead of having to wait around for time to pass, which is a good move for a portable title. Meeting townspeople on their schedule has never been easier. 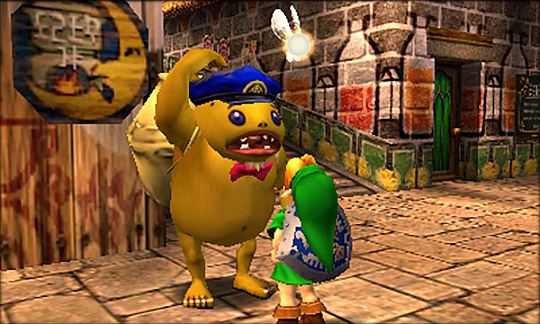 Above: Wait, what was I doing again?

Hard to get into

The only downside to Nintendo’s fresh approach in Majora’s Mask is that it’s a bit harder to get into than other Zelda games. Starting out, Link appears as a child and cannot wield weapons. And for the first time he’s not in Hyrule. While it looks and moves like a Zelda game at first glance, exploration is limited early on and combat is nonexistent. Worse, some of the game’s less polished quests have to be worked through to get to the good stuff.

Even with the improvements to Majora’s Mask’s systems, it’s still not an ideal portable game.  With a somewhat convoluted storyline spanning three virtual days and countless intricate tasks to track, it doesn’t really fit the pick-up-and-play vibe of the 3DS. Even considering that this is the third time I’ve play this, I still found it easy to forget what I was doing after some breaks. An improved notebook does a decent job of keeping track of your unfinished tasks, but you can still lose your way. Majora’s Mask is surprisingly light on hints for being so quest-heavy. 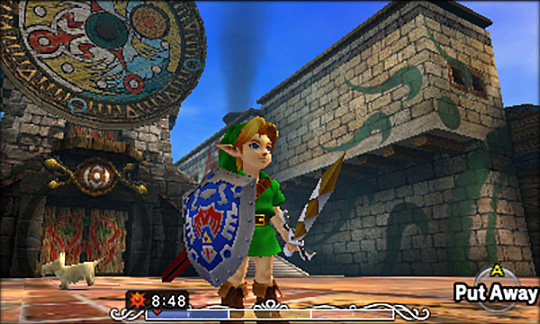 Above: Link in Clock Town, which you’ll see a lot of.

Majora’s Mask is an odd one, but it’s a legendary game from Nintendo’s library, and one that deserves a rerelease. With its graphical improvements and system enhancements, one of the best Zelda games is even better this time around — and that’s really saying something.

It’s best played on the New 3DS with its new 3D functions and C-stick, but don’t let your older system stop you — it’s good no matter what you play it on.

The Legend of Zelda: Majora’s Mask 3D for Nintendo 3DS comes out on Feb. 13. Nintendo provided GamesBeat with a digital download code of the game for the purposes of this review.