The virtual hat business makes millions of dollars every year.

Valve revealed that it paid out $10.2 million to individuals who create virtual goods for its Team Fortress 2 shooter and its Dota 2 multiplayer online battler in 2013 (via PC Games N). During its Steam Dev Days conference in Seattle, which ended yesterday, Valve held a talk for fellow developers about how it is shifting to games that enable players to create value for one another.

Only 661 users are creating items for Valve games, so the average community content producer earned $15,000 from the items he or she sold on Steam in 2013. Valve gives 25 percent of the sales of items to its creator, which means the publisher sold more than $40 million in user-created goods in 2013.

Both Team Fortress 2 and Dota 2 are free to download and play. Valve makes items for the games, but it also empowers its community to do the same with easy-to-use software tools. What kind of items? Well, Team Fortress 2 is famous for its hats that players can put on their characters to give them some more personality. In Dota 2, community members also create and sell cosmetic costumes and items that characters can wear to look different. 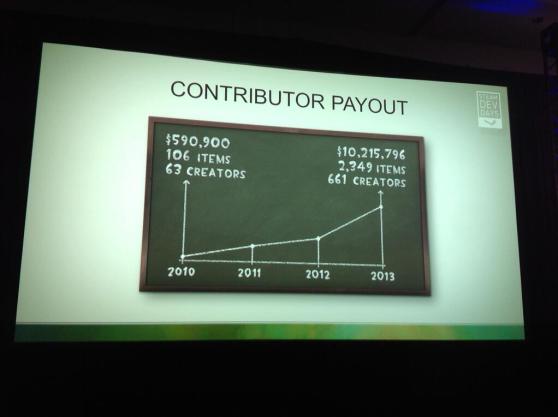 Valve is best known for developing the Half-Life series of shooters and operating the Steam digital-distribution store. It first released Team Fortress 2 in 2007 as part of a collection of games called the Orange Box. The publisher sold the title for four years before switching it to a free-to-play model in June 2011.

Since switching Team Fortress 2 to free-to-play, the shooter now has 3 million monthly active users, and that audience is spending money on Valve- and player-created items.

Dota 2 debuted in a pre-release testing phase in 2012. Valve designed it from the beginning as a free-to-play release, and it is now one of the studio’s biggest games. The title regularly has more than 500,000 gamers playing at a time.