October was the biggest month of the year so far for digital game sales, but one industry analyst claims that did not help Dota 2.

Worldwide digital revenues for games surpassed $5.5 billion last month, according to industry intelligence firm SuperData. That is a 7 percent year-over-year growth. Games like FIFA, League of Legends, and Clash of Clans fueled that spending. Publisher Valve’s Dota 2, the multiplayer online arena battler, is starting to decline. SuperData chief executive Joost van Dreunen points out that the game’s recent update has turned off many players. Dota 2 is no longer in the top five highest-earning free-to-play PC games, which shows just how competitive that market is.

“Valve’s popular Dota 2 saw a decline in revenue and player numbers fell for the second straight month,” van Dreunen wrote in a blog post. “Bugs have been pestering the game since its latest update, cooling audience excitement together with a comedown following the all-time-high around The International 2015 tournament.”

This has pushed games like Maplestory ahead of Dota 2 in terms of revenue for free-to-play PC games. 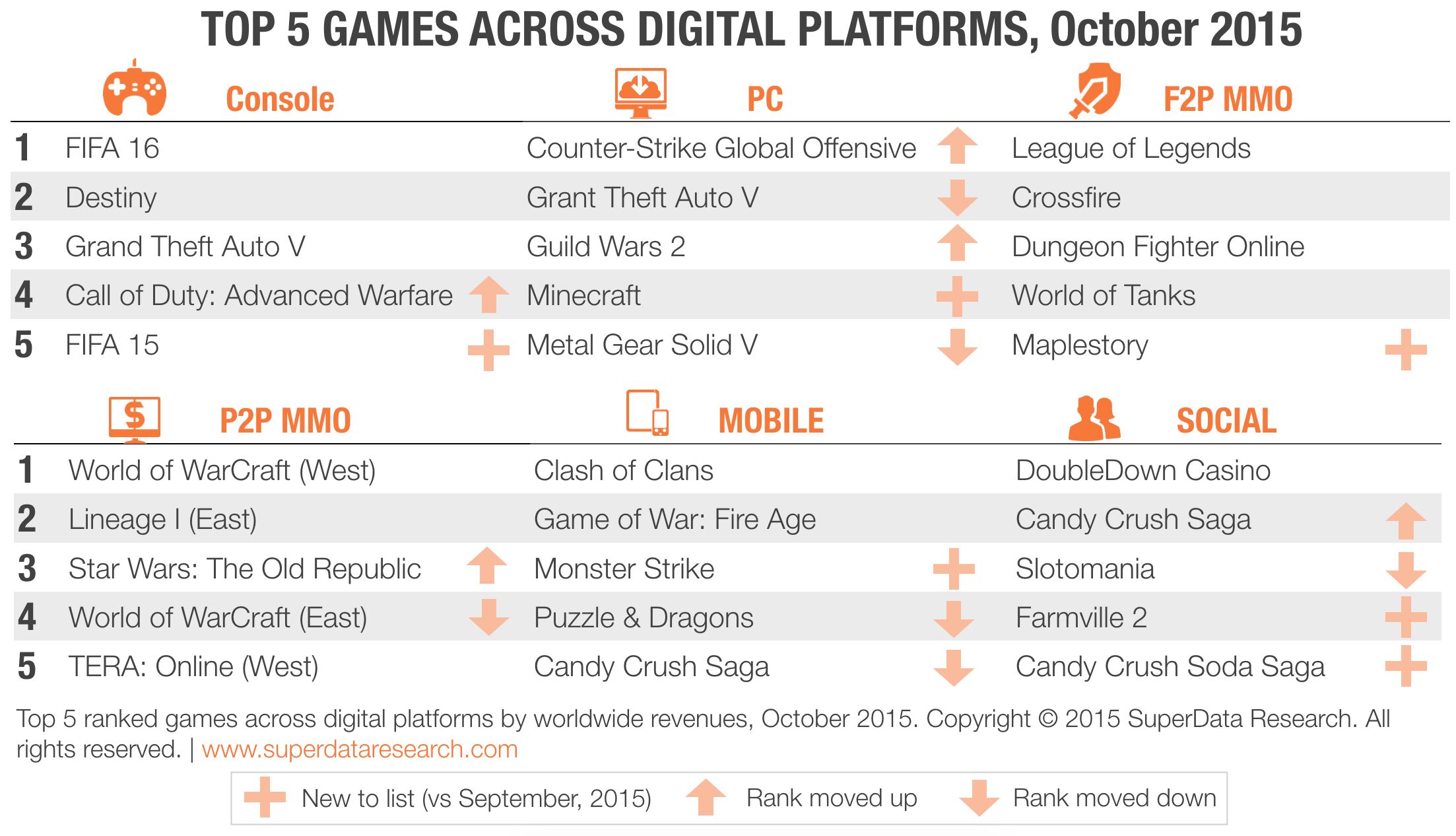 Above: SuperData’s list of the top-grossing games by digital revenues.

“In the lead-up to the holiday season, total digital games sales hit their highest point for the year so far,” wrote van Dreunen. “With the exception of pay-to-play MMOs, all segments managed to grow their revenue.”

“Global digital PC earnings were up 6 percent, totaling $622 million, as gamers in Asia pushed sales by 53 percent, proving themselves more accustomed to purchasing full PC games upfront,” wrote van Dreunen. “And the size of the global mobile gaming audience maintains its momentum: the total monthly active users number was up 13 percent year-over-year, totaling 2.3 billion in October. As emerging economies like India open up to mobile gaming, the growth curve behind average spending is slowing, increasing only 7 percent to $2.1 billion.”

This momentum should push the gaming industry to a mammoth November and December. Revenues always peak during the last two months of the year. That’s true for digital as well. And with games like Fallout 4 debuting and generating $100 million in digital revenue in just three days, according to SuperData, that trend should hold true.