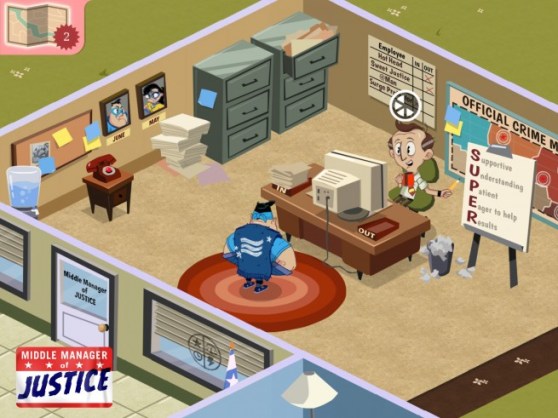 Everyone knows Superman and Wonder Woman, but what about the unsung heroes of the world’s many superteams? What about the guy who keeps the lights on and the tights clean? Where’s his iOS game? Thankfully, Double Fine has just announced Middle Manager of Justice, which is about exactly that.

The game puts you in the role of an office manager at the newest branch of Justice Corp, which is apparently some kind of superhero corporation, and tasks you with keeping your staff of costumed crime fighters in shape and on task. To do this, it looks like you’ll have to tap into your own powers of time management and poking stuff, since the gameplay appears to function in a similar fashion as something like FarmVille or Game Dev Story, but with supervillain battling thrown in.

Obviously, as evidenced by that description, the game features a grim and brooding tone similar to Christopher Nolan’s Batman movies. Oh wait, Double Fine developed this game, and it’s the master of the wacky and cartoonish (and the makers of Psychonauts and Costume Quest), so it’s probably going to end up being wacky and cartoonish…which is a much better idea anyway.

The game will be free-to-play, with two forms of in-game currency: coins and Superium. Users will earn both simply by playing, but they will be able to pay real money for Superium if they want to experience things and strengthen their heroes quicker. Fortunately for cheapskate gamers, Double Fine is being very quick to assure everyone that it is possible to experience everything in the game without having to pay for anything. Real money is simply used to make things go faster.

Middle Manager of Justice will be available soon for iOS in Canada and, according to project lead Kee Chi, everywhere else “soonishly soon” after that.