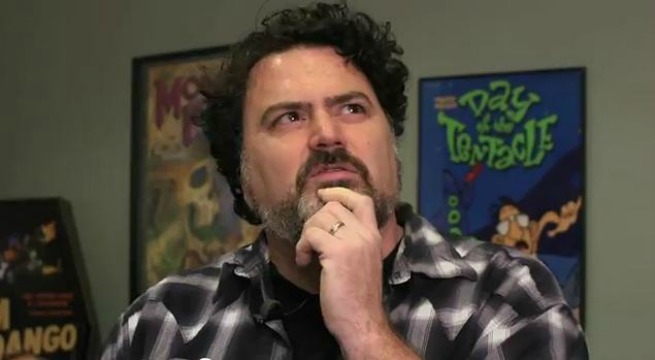 “I miss making them and I miss playing them. Because there’s a certain kind of player who doesn’t really like a lot of the games that are popular now,” he said.

As a writer and programmer for LucasArts in the 1990s, Schafer was responsible for co-designing some of the genre’s most well-regarded titles, including Maniac Mansion: Day of the Tentacle, Grim Fandango, Full Throttle, and The Secret of Monkey Island. However, in an industry currently dominated by first-person shooters like Call of Duty, he says it’s hard to get publishers to take a risk on a more thoughtful, slower-paced game.

So for his latest title, temporarily-named Double Fine Adventure, Schafer turned to crowd-funding website Kickstarter and his loyal fan base for help. His goal was to raise $400,000, a modest number for a modern day video game budget. Not only was the project fully funded in just over 8 hours, it raised a record-breaking $1 million by the end of the first day.

“We’ve always had really passionate and dedicated fans, but I did not expect this kind of financial reward,” Schafer said. “I really thought that we might make our goal of $400,000 by the end of the 30-day period, but when we hit a million in the first 24 hours we knew that we were on to something really unique.”

Double Fine Productions is the first major studio to finance a video game through Kickstarter and develop it in the public eye. Schafer says all of the donated money will go towards making the product bigger and better. It will now launch on multiple platforms, including PC, Mac, Linux, iOS, and Android. It will also feature voice acting and localized text in French, German, Italian, and Spanish. A documentary series filmed by 2 Player Productions will follow the Double Fine team as they work on the project and will be available to backers.

“They’ll get to see our brainstorming sessions. We’re going to get people together and do like we did in the old days, just sit in a room and talk about anything we want to talk about until we come up with a couple of puzzles each day. We’ll let people see that. And they’ll see what the artists are drawing, the kind of thought process we go into when we’re shooting, what character designs we like. We want to make them feel as much as possible like they’re here in the office sharing in the game development process with us.”

Schafer says his team is not nervous about the thought of cameras following their every move, having already taped an episode of G4 TV’s Icons during the crunch period for the 2005 3D platformer Psychonauts. “That was really revealing. We had some people complaining about how hard the work was. Some people were sleeping on the couch. We’ve opened our doors to cameras before, but this is really the first time people are going to see the beginning of the creative process, not just the painful conclusion.”

With the Double Fine Adventure Kickstarter project now past the $2 million mark, many have questioned whether or not its success will change the way video games get published. Developers like Obsidian Entertainment’s Chris Avellone and InExile Entertainment’s Brian Fargo are now toying with the idea of launching crowd-funding campaigns of their own. Schafer sees it as a good thing.

“I think people have asked, ‘Is this a game changer? Is this going to revolutionize game production? Are the publishers doomed?’ And I don’t think it’s that extreme, but I also think when people dismiss it as just a one-off deal that only Double Fine could have done — and it only could be done once — I think that’s not true either,” he said. “I think as long as someone else comes up with a similar story, whether it’s a game or not — just the right project, the right person making it, the right time, and a reason why only something like Kickstarter could fund it — I think you could have another explosive funding project on your hands.”

“I think it’s a great way for a lot of projects, games or not games, to be made whenever the ‘gatekeepers’ — the big companies that decide what gets made and what doesn’t get made — are not serving certain segments of the fan base,” he added. “And enough of those fans can use the Internet to coordinate and kind of pool their resources. They can make it happen for themselves instead of waiting for these gatekeepers to do it.”

Schafer says it’s the relationship between creators and backers that makes the Kickstarter process interesting. “Instead of making a game and risking all your money and hoping the fans show up, here the fans are showing up at the beginning. So the risk is over and they’re paying for the game in advance, essentially. And what that requires is just a lot of trust and faith that we’ve built up doing this for 10 years with Double Fine and 10 years before that with LucasArts. Hopefully, we’ve built up enough trust where they feel like I’m gonna do my best to deliver something worthwhile to them.”