The Inquisition will take any help it can, even down to a single herb picked on the road.

With Dragon Age: Inquisition (out Nov. 18 on PS4, Xbox One, PS3, Xbox 360, and PC), BioWare is looking to give a stronger purpose to exploration. The third game in the fantasy (now open-world) role-playing game franchise hopes to give every action, no matter how seemingly insignificant, some weight in the story. I recently spoke with executive producer Mark Darrah to get some details on how and where Inquisition could make item gathering important.

Exploring every inch of a massive world

Dragon Age: Inquisition is a gigantic game, the combined regions of the map taking up more square footage than all of the areas in Dragon Age: Origins and Dragon Age II combined, according to BioWare’s internal estimates. That’s a lot of space to cover, and just traveling between main storyline missions would get boring fast. But the maps to each of Inquisition’s many, visually distinct areas are loaded with objectives big and small. The sheer amount of activities can be, honestly, overwhelming at first glance.

“In terms of exploration gameplay, it’s very important to have a series of goals,” Darrah said. “BioWare is good at overarching game goals: the big [campaign-based] objective. The place we really needed to figure things out was that minute-to-minute gameplay … that’s where the exploration gameplay really comes into its own.” 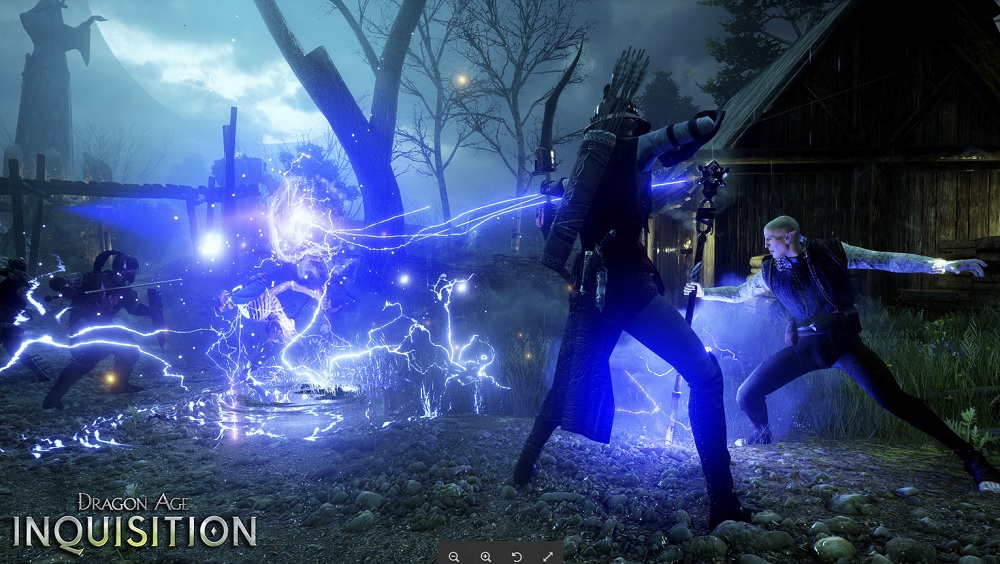 Above: Combat is one of more than a dozen activities your party can engage in when traveling across any of Inquisition’s large regions.

While the Inquisition (you’re a part of this group) seeks out the cause of the Breach, a massive rift in the fabric of realities whose sudden appearance sets the narrative events in motion, smaller rifts appear in each area for you to close. These offer the biggest rewards, if your adventuring party is strong enough to battle through the demons and spirits guarding them.

The expected array of hidden item caches, fetch and escort quests, and pockets of enemy resistance are in every area in abundance. Players also gain experience for visiting the various areas making up each region, claiming landmarks and laying out campgrounds that can act as fast-travel positions. These mechanics have largely become the backbone of open-world RPGs, and Inquisition builds on them.

Exploring the environment yields viewfinders that you can glance through, pointing out mysterious “shards” off in the distance that you can collect and send back to the Inquisition to research. A handful of star gazers are also scattered across each region, giving your party a glimpse into the sky. Looking through those takes you to a star-drawing minigame, where you connect the dots of astrological signs to earn additional rewards.

In the name of the Inquisition

To put the traditional “side objective” label on any of these activities doesn’t quite work, however. Because everything you do, almost down to your individual steps, ties back into the size and effectiveness of the titular Inquisition. This ramshackle army of nearly every in-game faction seeks to find the meaning of (and destroy) the Breach: the cause of the dangerous rifts between realities — and it’s the largest one, too. Without the infrastructure of a country or larger, more dedicated armed force, the Inquisition runs on the agents, power, and influence players gain by completing objectives.

“The Inquisition is really the answer to tying everything together,” said Darrah. “We wanted to make sure that when you went to an area, you were going to an area for a purpose. You weren’t just going to a random square kilometer in the middle of nowhere. … Every action you [are] taking is in some way enhancing you or enhancing the Inquisition.”

Each camp you set up or area you clear of side quests grant you Power and Influence, both of which are integral to moving both the story and the Inquisition along. Power opens up new areas for exploration and acts as currency, should you want to send one of the Inquisition advisers at your war table on a timed excursion while you journey elsewhere. Influence buys you significant bonuses, including additional dialogue options on certain subjects, discounts at every merchant stand, and additional potion slots.

You’re always building toward your next improvement to the Inquisition. When every action you take in contributes to the core campaign, the motivation to travel that extra distance toward the next landmark is even stronger.

A chestplate made of dragonbone or iron

Picking up every herb you are likely to stumble across doesn’t sound that appealing as a battle plan. But maybe that’s because those herbs weren’t as useful in other games as they are in Inquisition. Like the side objectives, every artifact you find throughout your travels is a crafting material, quest item, or potion ingredient. They could also be put toward an Inquisition requisition order and used as part of a new training facility or supply of antidotes for the larger cause. A piece of iron ore, for example, is just as useful an armor-upgrading component as it is part of some new smithy for the Inquisition.

The Inquisition isn’t suddenly declaring iron as having the same worth as gold. Metal and other crafting components have a hierarchical tier system. Different metal types bequeath different benefits when making or modifying weapons and armor. Rarer metals have stronger effects than their more common cousins.

“If I’m getting huge piles of iron, I’m going to need something to do with it,” Darrah said. “We wanted something different from what we’ve done in the past. We have schematics [where] ‘you need five metal,’ not ‘you need five of a type of metal.’ And the behavior of the item is based on that. I can make [a] suit of armor with iron or with steel or with dragonbone. And it’s going to … have different properties.”

The Inquisition, what a show

“The Inquisition is the solution to what we perceived as one of the challenges of exploration, which is purpose,” Darrah said, “We wanted to make sure we could still tell a strong story while [we] were letting the player be mostly self-directed. And to do that, we needed … glue that would hold that narrative together, and that’s where the Inquisition comes from. It solves a lot of problems that come from the overall design.”

A continent-wide organization doesn’t just run itself. The latest Dragon Age makes the Inquisition a part of everything. Aside from the moments you leave the game running to grab a sandwich, almost all of your actions feed back into your titular cause. You spend a lot of your time filling up progress bars in Dragon Age: Inquisition, be it the amount of rifts closed in an area, how many landmarks you have claimed, or how many recipes can use that herb you just picked up.

It’s all done in the name of the Inquisition.