Dragon Age: Inquisition had issues with Sony’s PlayStation 4 2.0 firmware update. GamesBeat’s review does not render any judgments on the co-operative campaign or mutliplayer because of this. –Ed.

BioWare has taken its fantasy role-playing game franchise into a colossal open world and a new console generation. I spent around 50 hours with the PlayStation 4 version of this massive fantasy adventure, and I could have easily doubled that.  A continent-wide power struggle erupts in the realm of Thedas in the wake of the Breach, a sudden seam split into the sky that spews forth demons from the ethereal realm of the Fade. The mysterious Rift brings together formally antagonistic factions from across the world into a ramshackle army known as the Inquisition, giving the player the control of its growth and power. Is Dragon Age: Inquisition (out Nov. 18 for the PlayStation 4, Xbox One, PlayStation 3, Xbox 360, and PC) a worthy cause, or a fool’s errand? 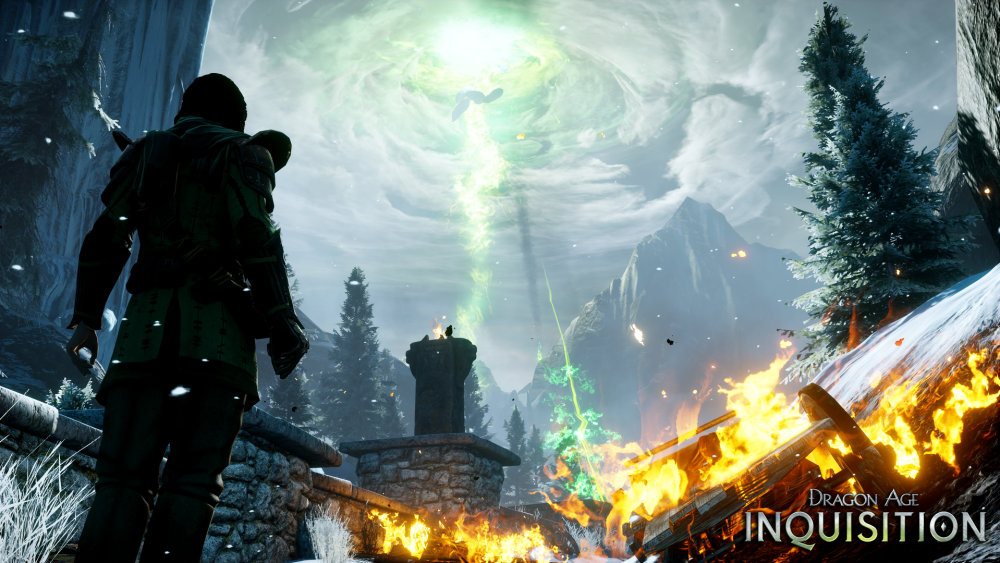 Above: Most of the best stories Dragon Age: Inquisition tells are off the main narrative path.

Inquisition spins its best yarns just outside the spotlight. You’ll be stumbling across enough loose lore material — in books, background dialogue, conversations with NPCs, etc. — to fill an encyclopedia series. Abandoned forest villas hide tales of domestic imprisonment, and more than a couple of companions work out their personal biases with each other in random, blink-and-you’ll-miss-it bursts. Thedas is a world filled with ambient narrative, all of it taking the risk of going unnoticed by players that just breeze through everything.

Inquisition’s strongest moment comes at a high-stakes gathering of nobles in the region of Orlais, when players can take their time in between cutscene setpieces to eavesdrop on salacious gossip or snoop around and find all of the grotesque secrets beneath the polished marble façades. Adventurers eager to get back into the action will miss the second and third act to the chapter, played out entirely outside dialogue trees.

It’s not too much of a backhanded compliment to say that BioWare’s best story work here is in the margins. The more effort you put into discovering the world and its inhabitants, the more chance you give yourself to stumble across an out-of-nowhere micro-drama or vignette that strikes an unexpected chord. Inquisition’s thrill of imminent discovery isn’t quite as pervasive as a Fallout or The Elder Scrolls, but what lies beneath is often better than what all of the important characters are talking about.

The natural diversity of Thedas Think of a climate or geological region, and it is most likely represented in Dragon Age: Inquisition. Granted, you won’t be traveling to an Artic basin or the depths of an ocean, but your adventuring party will spend most of its time running or riding around deserts, forests, plains, a bog, and a massive stretch of highlands. Inquisition’s gargantuan world occupies a handful of large, self-contained regions accessed from a few hub spaces, like the titular force’s mountain stronghold. With a minimum campaign length of 60 or so hours (not counting any speed reading through conversations), swapping between these vast regions helps alleviate a lot of potential boredom.

Environmental effects like rain, snow, and dust really helps sell a sense of lived-in space. Your screen is consistently filled with flora and fauna or intersecting levels of craggy rock. Different regions also have their own architecture as well. Dwarven ruins are strikingly different from those of the elves, and snobbish Orlesian estates could never be mistaken for threatening, tribal aesthetics of the Tevinter Imperium.

The lighting engine spends every active moment sending rays through tree branches or illuminating dust particles in the blurry distance. The visual assault is ever present, and it rarely fails to showcase a screenshot-worthy view.

Forget all of the mythical creatures and pointy ears; Thedas is already too pretty to exist.

A continent of constant progress 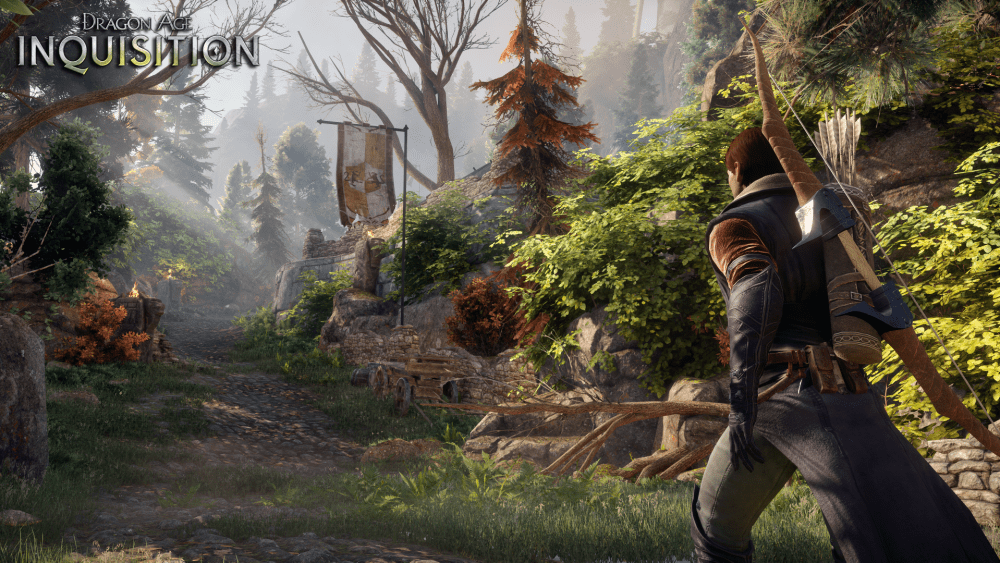 Above: Dragon Age: Inquisition has almost too much for you to do.

I can recall no other game that rewards the player’s actions as frequently or as constantly as Dragon Age: Inquisition. Nearly everything you do, from uprooting plants to discovering landmarks, gets you another step closer to completing multiple tasks. And it has an excessive amount of things to do in Thedas. Glancing through lookout points highlights mysterious shards to collect for additional experience; telescopes offer glimpses into the sky where you can connect the stars to form constellations, building toward finding a secret, loot-heavy location on the map; and every region comes with multiple camp sites to set up and new areas to discover. This is in addition to roaming bands of enemies to attack, side quests to complete, and closing the rifts between dimensions that spawned from the Breach.

You have nine companions, each with multiple missions devoted to gaining their loyalty and/or wooing them. Skyhold, the Inquisition’s eventual mountainside fortress, can be aesthetically upgraded and populated with agents recruited from the world at large. The observant adventurer can find books, mosaic pieces, letters, and songs to add to the massive informational codex about Thedas and its inhabitants.

You can put items they gather toward an Inquisition Requisition, an order of materials required to further build up your growing forces through building new stables or studying poisons. You can also mine for ore and hunt animals for their hides in order to later craft armor and weapons. I had multiple points where it literally took a full 30 seconds for all of the progress bars to finish ticking off after I picked up a single Elfroot plant (you will never — I repeat, never — have enough Elfroot).

Spinning this many plates is initially overwhelming, but you face no limit to how many objectives you can have pending. You can even send the advisers of your Inquisition on missions for you, reading about their progress and gaining rewards once the timed duration of the mission is over. Once you settle into the world and figure out which type of missions or activities you want to prioritize, the groove can be addictive. That’s because, in addition to progress bars and experience points, all of your activities feed back into the central goal of the Inquisition.

Almost everything you can do eventually grants you Power and/or Influence. Power acts as a currency, unlocking new regions and occasionally expanding existing ones. Influence grants overarching benefits like additional inventory space or new dialogue options. It all helps feed into the general momentum Inquisition enjoys. By giving every action weight, BioWare creates an almost obsessive-compulsive need to see what’s behind every new hill.