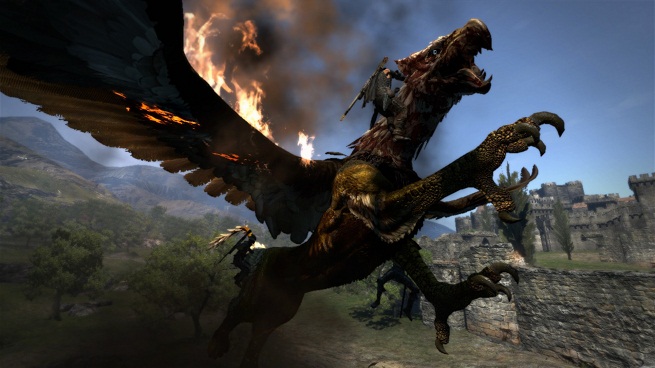 Heroes crave freedom. Send a willing warrior into a trackless landscape ripe with challenge, and he or she handles the rest with ambitious enthusiasm. Open-world epics such as The Elder Scrolls V: Skyrim and Fallout 3 empower gamers to carve individually unique experiences within a role-playing framework, and Dragon’s Dogma presents another grand adventure in this mold while sculpting some added flair.

A world unleashed
Sure, fully explorable environments come stock for this genre, but Dogma nails the upjumped scale right from the start. It’s as if The Lion King’s Mufasa draped a fatherly paw across my shoulders and solemnly said, “Look, my somehow human son. Everything the light touches is accessible.”

As befit for a game touting copious amounts of nonlinearity, Dogma doesn’t gate its lands behind progress checkpoints. If a new area presented itself during my travels, I simply walked to it. Such a straightforward feature kept desires of wandering beyond the well-worn roads of the duchy of Gransys at a feverish high. Hours clicked by on the clock from simply romping through the countryside, and Dogma’s impressively detailed climes provided such playgrounds as rocky crags, windswept ruins, and shrouded forests. 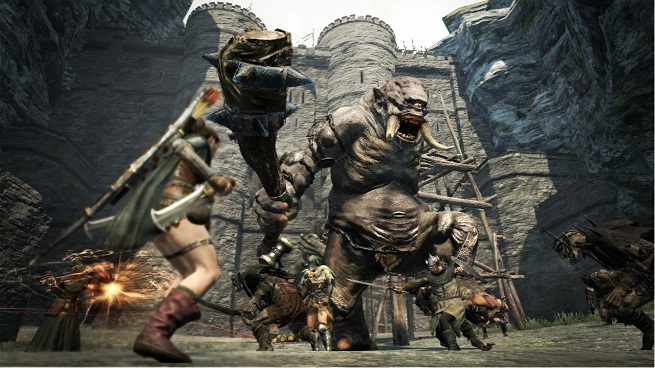 Still, trudging turns tedious after a while. Thankfully, the game’s stable of bandits, goblins, monsters, and other enemies pepper the scenery for on-demand action whenever the urge to hit something becomes unbearable. And you’ll want to seek out scraps, because once the steel or spells start dancing, Dogma truly dazzles.

Beasts such as ogres, griffins, golems, and cyclopes not only tower with appropriate immensity, but they’re also all climbable. It’s easy to spot the Shadow of the Colossus references here, as latching on helps melee characters reach critical weak spots. Plus, hanging onto a griffin’s feathery wing for dear life after taking a running leap off a crumbling archway beats whacking at shins any day.

Multiple time sinks
Take a straight shot through Dogma’s main story, and it’ll cost you close to 50 hours of playtime. For hapless completionists like myself, however, that figure easily balloons past the 100-hour mark thanks to the sheer volume of weapons, armor, upgrade materials, and combinables that makes the Library of Congress look like a tabloid stand. The loot-itch became a loot-rash while homing in on tantalizing chests and constantly checking vendors for updated wares. A multi-class leveling scheme and the opportunity to learn and swap between each class’ ability pool adds plenty of variety and flexibility for any situation. 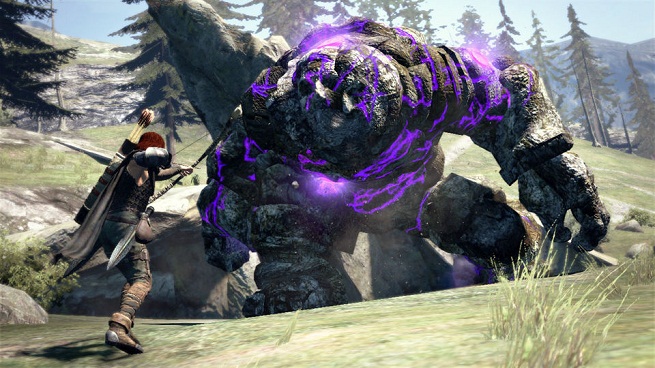 Single-player focus
Some RPGs thrive without the “massively multiplayer” prefix attached to it, and Dogma excels at keeping its quests a strictly solo affair. It escapes tacked-on-itis by implementing a cleverly non-intrusive online functionality via its Pawn system.

Pawns are player-created, computer-controlled companions acquired from visiting Rift Stones within towns and encampments. Up to two Pawns can join your party, with the third slot reserved for your own handcrafted main Pawn. Simply resting at an inn uploads the latter’s stats and equipment to Dogma’s server, and searching for and filtering Pawns by class, level, usage, and ability type . The entire process is seamless, simple, and most importantly, it properly utilizes a multiplayer mechanic without diminishing single-player’s appeal.

Limited camera controls
Gransys possesses a mixture of natural and deadly beauty. Items and sacks of gold litter the ground as if a medieval pinata exploded somewhere. That cyclops wants to cave in my face with a fist the size of a house. All three elements necessitates a higher degree of camera control, a feature Dogma somehow skipped entirely.

Because of the restrictive degree of zoom, avoiding giant foes flailing with crushing force often involves whether I rotated the camera around in time to get my bearings. A Demon’s Souls-esque lock-on system would work wonderfully here, but barring that, the lack of zoom controls doesn’t make sense. 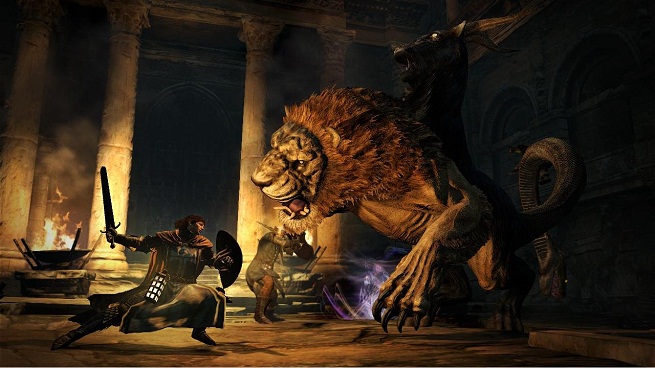 No fast travel
By the leathery wattle of the Great Dragon, this is the most frustrating drawback. Quests often demand a lengthy trek from one desolate corner of Gransys to the other, and lacking a fast-travel hop between landmarks means hoofing it on foot everywhere, devolving into a taxing battle with boredom during lengthy strolls.

Purchaseable Ferrystones zaps one back to Gran Soren, the capital, and valuable Portcrystals changes the stones’ destination when placed — but that involves even more walking to the desired transportation point. Capcom obviously intended players to poke around the wilds as long as possible, but the snails-pace walking handicap severely hampers long-term mobility.

Loading…loading…loading….
Entering and exiting areas and cutscenes arrive laden with lengthy loading times. Really, at this point in the current console generation’s unnaturally long cycle, developers should know the limitations and capabilities of the hardware. I often encountered loading screens for asinine things such as two-second cutscenes, a shot of a door opening, and other loading screens.

CONCLUSION
Pencil in Dragon’s Dogma as another success for Capcom. Though lacking polish from a mechanics standpoint, it nevertheless presents an awesomely addicting cornucopia of exploration, epic combat, and loot-chasing for hours upon hours of fun. Trading Pawns with other players brings an interactive edge, and I can see this game occupying the disk drives of many consoles for a very long time.

Dragon’s Dogma released on May 22, 2012 for the PlayStation 3 and Xbox 360. An Xbox 360 copy of the game was provided by the publisher for the purpose of this review.