The fear of clowns is something that people talk about more than they actually feel.

These days, clown-phobia feels like a kind of a bad joke everyone is in on, without any emotional trauma to back it up. This modern “fear” of clowns dominated the early part of GamesBeat’s in-house demo of Dropsy (which featured an actual clown brought in by publisher Devolver Digital), an upcoming adventure game from Tendershoot and A Jolly Corpse. Director-designer Jay Tholen had no qualms about stoking that discomfort with clowns — fake or not — in his game of largely pleasant appearances.

Dropsy’s world, viewed in small chunks or through most screenshots, is an calm-looking city of saturated, pastel colors. Everything looks washed out and faint, toned-down as if for an infant’s playroom wall. But Tholen and company used these inoffensive tones to color dilapidated buildings and starving homeless people. And while most puzzles include a hug from its titular, playable clown character at some point, a squeeze from Dropsy’s finger-less hands is not always appreciated by those around town. 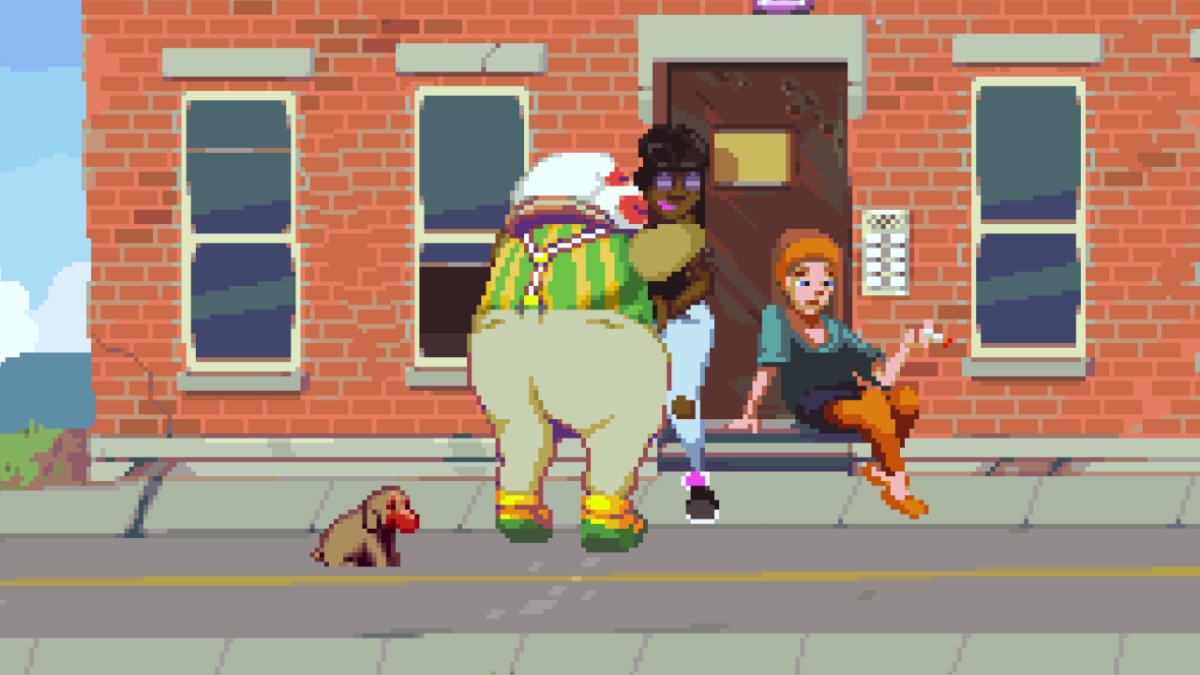 Above: By all first impressions, Dropsy is a pleasant game about hugging strangers.

This marriage of the disturbing and charming started with Dropsy himself. The player-character began life as a villain in an abandonware (in this case meaning a discarded, or unfinished) game. Dropsy’s initially monstrous appearance in sprite form garnered a lot of response from the posters on the Something Awful forums where Tholen was experimenting in design.

“I really feel … the creepiness that was originally there back in the old forum game is just residual, and purely because of his looks,” Tholen said. “I feel like that’s just carried over and I really don’t mind it still being there.”

That original, self-described “walking simulator” helped by a 2011 Kickstarter grew to gradually include more and more traditional adventure game elements. The surprisingly wide-reaching lore of Dropsy and the world around him, told primarily through postcards and Dropsy’s hand-drawn memories of his interactions with others, remained constant despite the genre shift. The final game is a point-and-click adventure; your inventory is a baggy set of pants.

According to Tholen, the very act of having a huge as Dropsy’s chief interaction with others has drawn players in while giving his game that disarming upper crust layer. Particularly given the character’s blood-red face makeup and three, broken yellow teeth. That initial hook, Tholen hopes, will give way to a larger experience about acceptance. 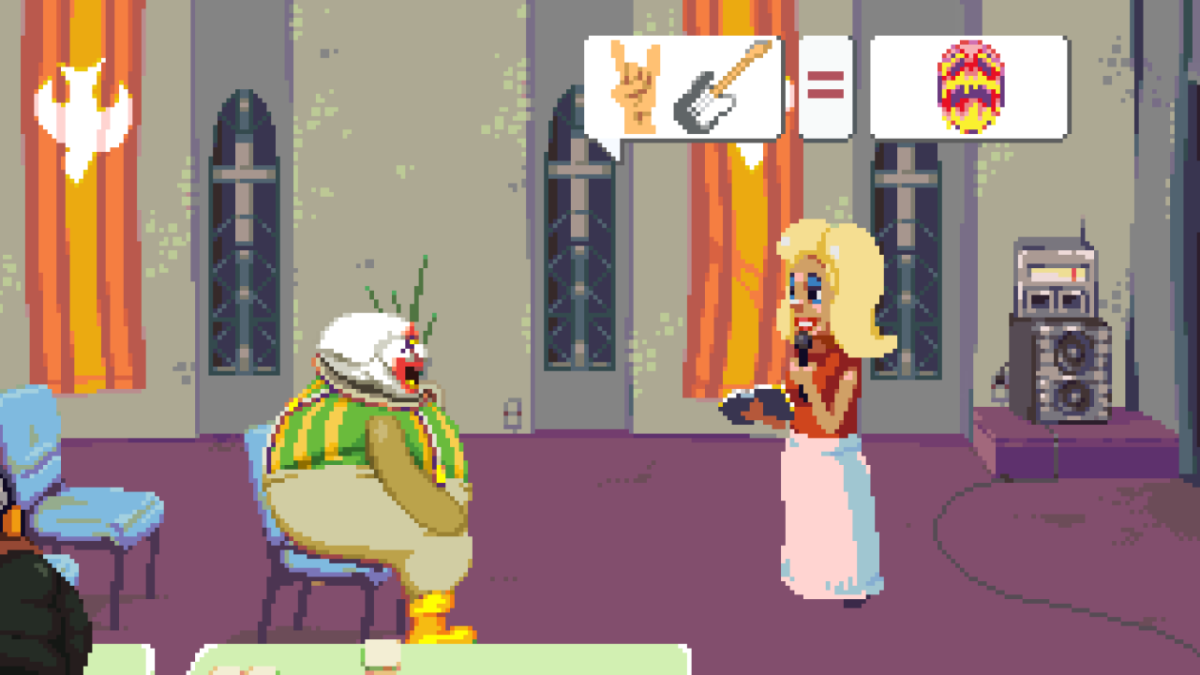 Above: All of Dropsy’s optional objectives are called “hug puzzles.”

“[The game] has turned into more of a thing about acceptance,” Tholen said. “Both people learning to accept Dropsy, and then Dropsy getting around the fact that basically no one likes him in the game.”

The public’s general fears Dropsy as a sort of local urban legend. A few years prior, a circus fire destroyed much of Dropsy’s big top. The jovial clown’s survival despite the odds granted him more than an eerie vibe, along with a quest to find out what really happened. That vibe drives most NPCs in the game to either disregard Dropsy’s genuine attempts at helpfulness, or outright run away from him in terror.

“The various characters in the game, they all have different ways that you can … earn their trust,” said Tholen. “At least to get a hug from them.”

All optional puzzles in the game are what Tholen calls “hug” puzzles. Simple, one- or two-step puzzles that take Dropsy from meeting someone to wrapping his finger-less arms (yep, still creepy) around them. One of these early on in the game revolves around finding a starving homeless women in the back alley of a church, and getting her a sandwich from the house of worship despite the harsh choir leader’s objection.

Much of Dropsy revolves the fallout from the clown’s hug blitzkrieg. Tholen stated that he didn’t want any “throwaway” characters, making background characters appear rife with clichés until Dropsy finds a way to warm their heart. From there, players unlock further “hug puzzles” and flesh out the world.

The hellish dreams of Dropsy the Clown 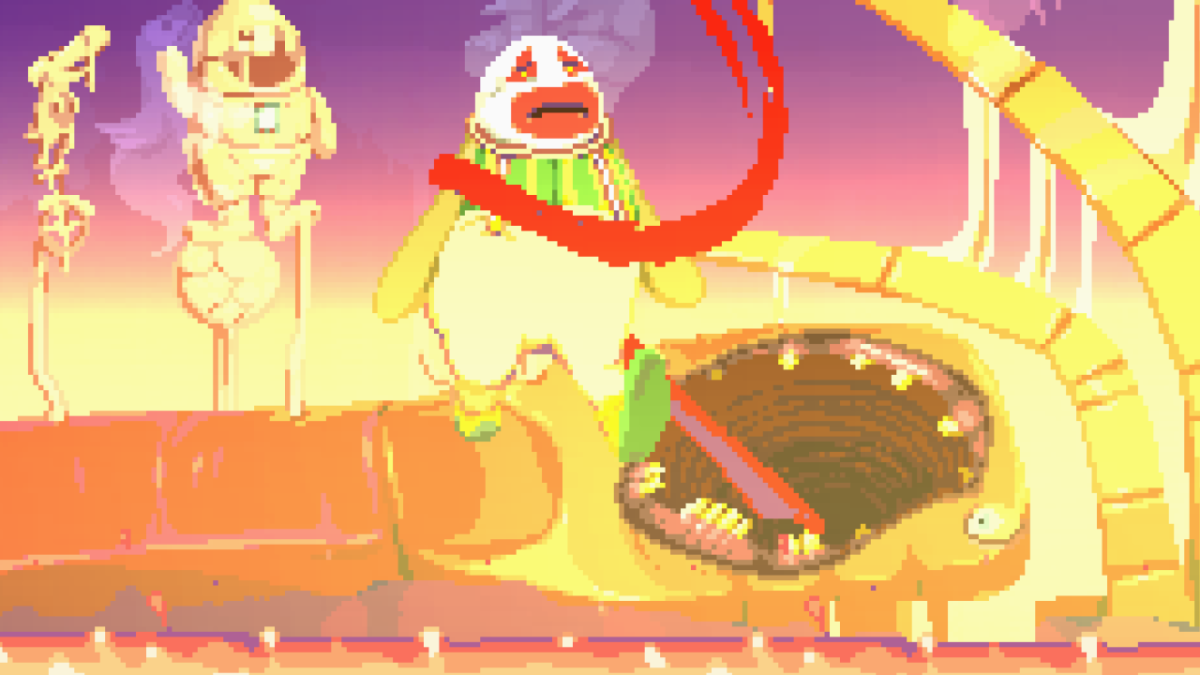 Above: Dropsy’s dreams are a descent into terror.

Despite Tholen’s instance his game pivoting more in the direction of acceptance of clowns, the later portions were much more overt in their horror elements. Dropsy’s dream sequences become bloody landscapes, and certain characters seek to take menacing advantage of the happy-go-adventuring entertainer. The game may be delightful, but not always happily so.

After all this take of big top tents and creep factor, I pressed a little deeper for Tholen’s personal history of clowns. While the designer agreed with the room that he was largely neutral at this point in his life, he vaguely remembered one instance from his childhood.

“When I was a kid … I distinctly remember a painting against a wall,” Tholen said. “And just seeing that painting – I vaguely remember even what it looks like – it was really just uncomfortable. My [walking] speed would pick up a lot when I would go by that dumb painting.”

Tholen continued, talking about how his relationship with Dropsy the character grew over development.

“I don’t particularly like clowns a lot,” said Tholen. “A lot of people think I must either like them because of the game or really hate them, and I’m a little bit neutral on them now. I almost see [Dropsy] like a real person, a whole different thing. He’s definitely a clown…but I’ve been working on the game too long, he’s real to me.”

It was just then that Tholen remembered that he was sitting on a couch next to an actual, real-life clown named Dropsy. At that point, we became thankful that Tholen went with his clown idea, rather than making a game about something like a press-eating shark.