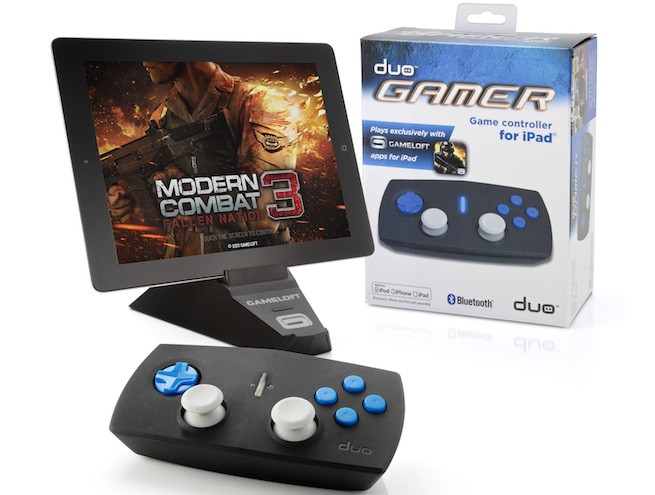 Here’s a radical idea: Let’s play games with real buttons and not that nebulous touch screen stuff. For most apps, touch controls work just fine, but as mobile games get bigger and more complex, it’s time to bust out the big sticks.

This is what mobile game developer Gameloft had in mind when it partnered with iOS apps and accessories maker Discovery Bay Games for the Duo Gamer, a Bluetooth-enabled, battery-powered controller that works exclusively with Gameloft apps. It’s now available for $79.99 and works with the iPad (all), the iPhone (3GS, 4, 4S, 5), and the iPod Touch (4th and 5th gen).

“We recognized that the iPad needed a console-style gaming controller and began development on the Duo Gamer,” said Mike Sievert, CEO of Discovery Bay Games, in an interview with GamesBeat. “With development underway, we started looking for the best launch partner and Gameloft was our first choice. Their top-rated apps feature rich, immersive 3D graphics and the deep storylines that gamers have come to expect.”

I had a few minutes to play with the controller last month at Gameloft’s headquarters in San Francisco. The first thing I noticed was how responsive the Duo Gamer felt: The two analog sticks were as solid and smooth as those I’m used to playing with on a PlayStation 3 or Xbox 360 controller. It has a nice weight to it as well, even though it doesn’t have any sort of force feedback or rumble built-in.

It’s clear that the best way to enjoy the Duo Gamer is to sit back on a couch with the games projected on a TV, though the box does include a stand to hold your iPad. I was playing N.O.V.A 3, the latest in Gameloft’s science fiction-themed first-person shooter series, this way via an iPad that was using Apple’s Digital AV Adapter and a HDMI cable. The two trigger buttons — the left for aiming, the right for shooting — felt snappy as I blasted aliens away with my shotgun (in part due to the game’s really generous aim assist). According to Sievert, two AA batteries should last up to 24 hours of continuous usage.

It helps if you’re a huge Gameloft fan

At almost $80 each, the Duo Gamer isn’t exactly an impulse buy. As prolific as Gameloft is when it comes to making iOS games, the controller will only work with five titles at launch: N.O.V.A 3, Brothers in Arms 2: Global Front, Asphalt 7: Heat, Modern Combat 3: Fallen Nation, and Order & Chaos Online. At least five more games, still unannounced, will be compatible in the next couple of months. Beyond that, however, it seems that future support will depend on the Duo Gamer’s success.

“[What we’re hoping for are] people who are that hardcore into Modern Combat and N.O.V.A,” said Thomas Price, product PR manager for Gameloft. “They’re hopefully people who just play multiplayer all the time. They’re going to want to get one of these because it’s worth it to them and because they have all these games and they play them all.”