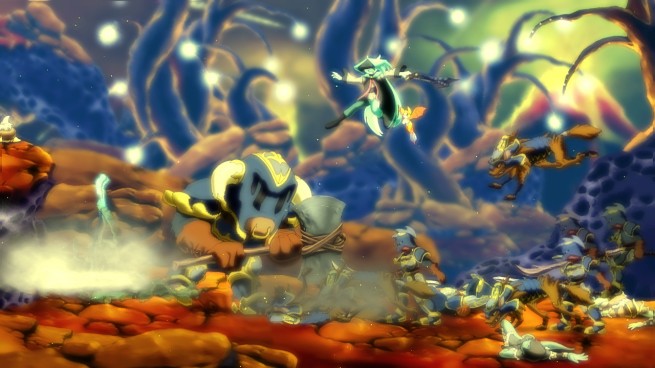 I don’t know what I was expecting. The well-worn pun in the title should have tipped me off that Dust: An Elysian Tail wasn’t going to be a work of narrative excellence. Still, when the first five minutes rolled by in the Xbox Live Arcade (XBLA) game, the poor plotting and terrible voice acting knocked me back. It’s a problem that the astounding visuals exacerbate. When something looks this beautiful, it makes every flaw more readily apparent.

Dust: An Elysian Tail is a side-scrolling combo-based action game. If you’ve played Muramasa: The Demon Blade for the Wii, then you should know exactly what to expect. The developer lifted most of the game’s structure directly from that Vanillaware-developed title. Dust, the hero in An Elysian Tail, is capable of 1,000-hit combos. Each level is a series of connected arenas, and the overworld map allows you to select your next destination in whichever order you choose. Non-player characters who provide Dust with information and quests reside in peaceful towns. All of these design decisions are implemented almost exactly as they are in Muramasa.

Not that there’s anything wrong with an indie game taking a familiar formula and expanding on it. Unfortunately, that’s where developer Humble Hearts fails. Dust: An Elysian Tail is a beautiful but poorly paced mess with eye-roll-inducing voice acting and dialog.

Hyper-smooth animation and gorgeous visuals
From a technical standpoint, Dust is possibly the best looking XBLA game. The animation has a buttery-smooth quality that surpasses just about anything Cartoon Network is airing on Saturday mornings. The characters and enemies move with a fluidity that gives the undertaking a mesmerizing swirl that is difficult to look away from.

The sprite work and background art are both highly detailed and crisp looking. This is incredibly important when the action gets especially frantic. Despite dozens of enemies, scores of projectiles, and hundreds of melee hits all simultaneously flying around the screen, the action is still discernible thanks to the polished graphics.

A fun, high-energy combat system
Stabbing, slicing, and electrocuting is Dust’s bread and butter. The game is never better than when you have a fully powered-up protagonist taking on legions of sword fodder. Deftly switching back and forth from direct-combat melee attacks to projectile assaults with the help of Dust’s sidekick character Fidget looks and feels very cool.

Humble Hearts instills a bit of strategy by forcing players to keep an eye on a single meter that multiple skills communally draw from. Too many indirect attacks will wipe out the meter quickly. To replenish it, Dust must successfully land a handful of sword strikes. The dodge move also relies on that same meter. Going into a battle without the ability to dodge increases the likelihood of a negative outcome for the player.

It’s a constant game of balancing attacks. A variety of moves is especially important if you want to get 1,000-plus hit combos which is kinda the whole point of Dust.

Absurd voice acting, silly narrative tropes, and questionable character design
In the opening moments of the experience, the protagonist discovers he has amnesia, he gets a magical sword, and he acquires a wise-ass sidekick. It all occurs because that’s just what happens in these games. That’s enough for the developer, and the developer assumes it’s enough for the player.

Fidget, Dust’s flying nimbat (a mix between a cat and a bat) cohort, has a shrill voice that takes a while to get used to. Dust, meanwhile, speaks with that common-in-games inflection of a teenager who is wise beyond his years. It’s not annoying to listen to, but it did make me roll my eyes. Although, that is nothing compared to some of the townsfolk, who all speak in wildly random cultural accents. The first town had characters that spoke with Australian, Italian, and eastern-European twangs.

I could forgive a lot of that if the story was worth giving a damn about, but it isn’t. It’s a standard hero’s journey. Most story beats are very obvious and swamped in melodrama. Spoiler warning: If you meet someone who is ill in a town with a graveyard…well, you probably know how that quest ends.

The look of the characters is very hit and miss. Everyone in the game is either an anthropomorphic mouse-rabbit-type thingy or lizard. Dust looks cool with his shrouded face and blue, wavy clothing, but I was off-put by Fidget’s design. She has wide hips and an unnatural bustline that gives me the willies. I understand some people are into that (and I’m not judging), but it just made me uncomfortable. A lot of the friendly cast looks like Care Bear rejects. At least most of the enemies — outside of the common grunt types — have an interesting and sinister look.

Boring exploration, frustrating platforming, and broken pacing
As fun as the combat is, it buckles under long spells. It’s great in short bursts but fighting enemies is not something I wanted to do for an hour straight. It doesn’t have enough variety, so it gets very repetitive. Humble Hearts realized this and attempted to break up the combat sections with exploration, platforming, and challenge arenas.

This is where the game comes unglued. The exploration is boring. As Dust collects more abilities, he has the ability to find more secrets. It’s something that props up an entire genre of Metroids and Castlevanias, but it doesn’t have the same effect here. Where Super Metroid feels exquisitely planned out, Dust’s exploration feels slapped together. I was never proud of myself for figuring out where something was, I simply went through the dull motions.

The platforming is something that suffers in comparison to the combat. When the protagonist really gets going with his attacks, he zooms across the screen like a locomotive. It feels magical. Jumping over spikes, on the other hand, feels inaccurate and silly — especially when those spikes can cause such massive damage.

It’s all very boring, and it destroys the pacing.

Dust: An Elysian Tail is a pleasure to look at. The combat is deep and highly kinetic, but the rest of the game can’t keep up with that energy. What’s left is an inconsistent and sometimes boring product that doesn’t live up to its potential.

Perhaps if you want something visually appealing and you have a weakness for anthropomorphic characters and predictable stories, then maybe this is right for you. For everyone else, your time is best spent with something else.

The publisher provided GamesBeat with a downloadable code for the purposes of this review. Dust: An Elysian Tail will hit Xbox Live Arcade on August 15.