Our small, crack crew of writers just didn’t have enough hours in the week to see all of the games at this year’s Electronic Entertainment Expo. One of the world’s most biggest video game tradeshows was just too, well, big. Playable demos, nonplayable demos, trailers, teasers … we just couldn’t get to them all. So instead of giving one group-voted “Best of Show” award from GamesBeat, each of us are recognizing the one coolest thing that we got to see.

See below for our individual Games of the Show. And don’t miss out on our silly E3 2014 Non-Award Awards! 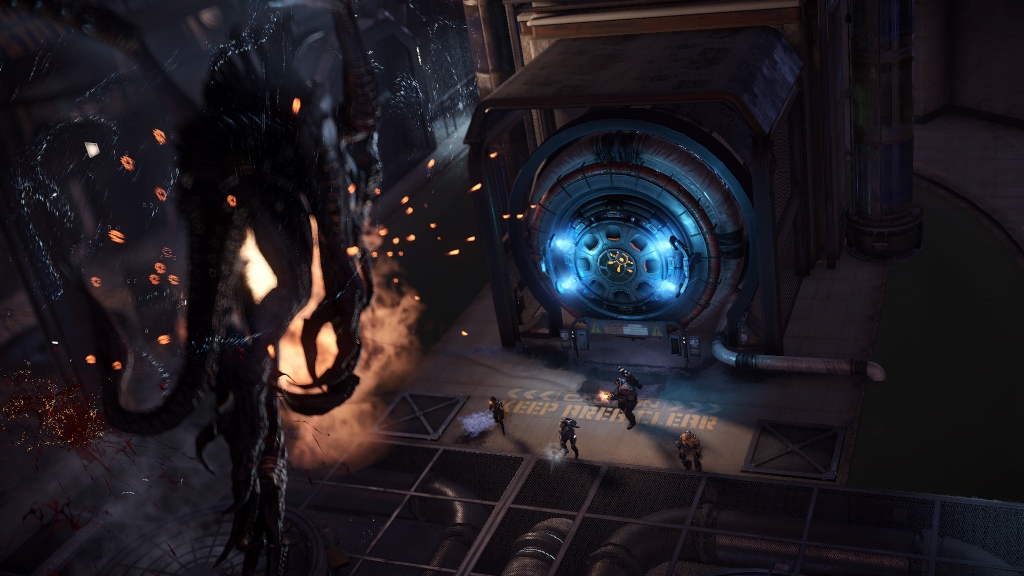 I’ve been to 18 E3s in a row now, so I’m totally OK with admitting that it takes a bit more for video games to impress me. I still love ’em, but demos rarely raise my heart rate these days.

After I downed a team of hunter-players in a 4-versus-me match of Evolve, however, I was on an adrenaline high for the rest of the day.

Evolve is an asymmetrical multiplayer shooter from publisher 2K Games and developer Turtle Rock Studios. In it, four people take on the roles of the hunters of various classes (assault, medic, support, and trapper), working together to take on a single, giant, player-controlled monster.

This isn’t Godzilla Call of Duty, though — twitch-shooting alone won’t get you the victory. The hunters must coordinate their efforts, taking advantage of their unique skills. The support class, for example, can cloak the humans and track the monster. Meanwhile, the trapper can take advantage of his teammate’s abilities and get in close enough to enclose the enemy in a giant domed shield, so it can’t escape too far. Meanwhile, the monster starts off a little weak and underpowered. It must stay hidden, feeding on wildlife until it can build up enough strength to face its predators. It has basic attacks, but how you use and level up its unique powers will ultimately determine whether you can fend off those hunters.

This unique gameplay requires some strategy and thought no matter which side you play. And knowing that you just worked together to take down an overpowered foe — or that you just singlehandedly defeated four players — gives you a different kind of rush that you just can’t get from other shooters. 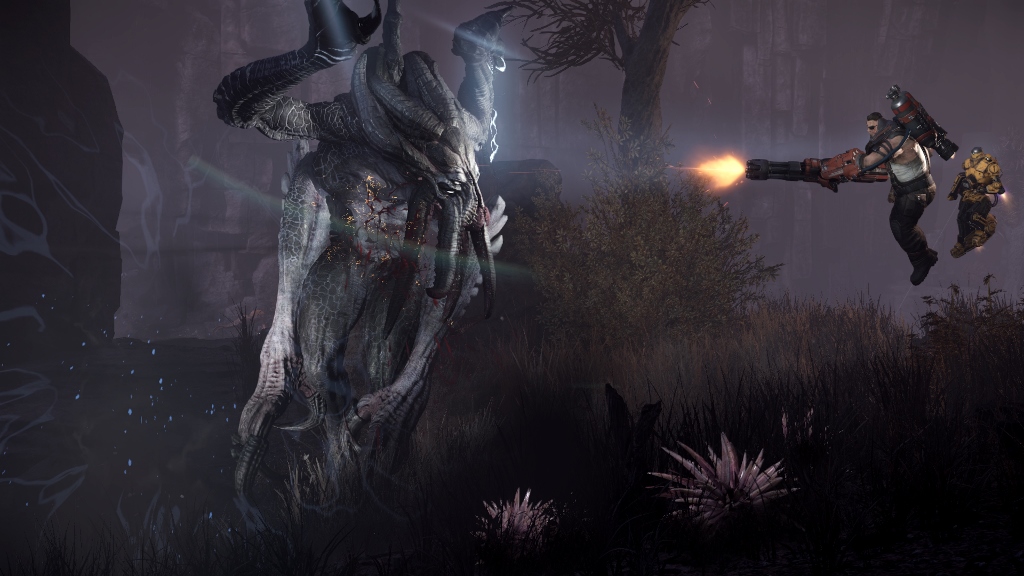 Evolve was the crowd-pleaser at E3. The 4-versus-1 game is simple yet deep, and it leaves its combatants hollering after every round. The key is that the monster is really smart at evasion, because it is controlled by a real person, and the four chasing hunters are also clever because they’re also controlled by humans.

Game of the Show: No Man’s Sky (multiplatform)

I saw a live demonstration of No Man’s Sky, and it’s definitely the game I’m most excited to spend more time with after E3. I know that some of you will say that developer Hello Games has never explained exactly what you do in this sci-fi endless-discovery game. Well, no one ever explained to me what I’m supposed to do in Minecraft or Day Z, and I’ve found ways to entertain myself for hundreds of hours in those.

The difference is that No Man’s Sky brings that sandbox gameplay and combines it with some astounding tech. I may end up disappointed with the final product if it doesn’t enable me to live out my dreams of space exploration, but for now, Hello Games has done the best job of presenting something I desperately want more of.

Game of the Show: Super Smash Bros. (Wii U)

I play Smash Bros. a lot. I still get together with friends on a regular basis to to play Brawl on the Wii and Melee on the GameCube. So I was incredibly excited to play the new versions for the Wii U and 3DS at E3. While the 3DS take worked great, Smash Bros. on the Wii U really got me exhilarated. It’s gorgeous, and beating up Nintendo characters is as fun as ever.

I got a chance to play as all of the new characters, and I love how distinct each feels. Mega Man has the most projectile-based arsenal in the series’ history, Rosalina can send her Luma companion (both are from Super Mario Galaxy) to fight across the battlefield, and the Wii Fit Trainer has a bizarre move-set based on yoga and exercise. I loved exploring the quirks and strengths of each new fighter.

Sure, you could argue that it plays exactly as you’d expect, but it just feels perfect. Maybe I saw some more creative and daring games at E3, but I never had more fun with them than I did playing Super Smash Bros. for Wii U.

When I played this last year at E3 — back when it was a prototype known as Eve VR — I was smitten: Space combat never looked or felt better in virtual reality. This year, I fell in love all over again. Eve: Valkyrie has a much stronger identity now that it’s in the process of being developed into a full game, and it looks bright and crisp on the latest version of the Oculus Rift VR headset.

I got goosebumps when I heard Katee Sackhoff’s voice (the actress who played Starbuck in Syfy’s Battlestar Galactica reboot) come through the headphones, telling me to get ready for my impending battle. I almost forgot that I had to actually kill people because I was too busy admiring the gargantuan warships and planets that surrounded me. And I accidentally knocked the headset on the kiosk when a developer said “look behind you” — your ship extends at least another 20 feet behind the cockpit.

Developer CCP still has plenty of work to do on Eve: Valkyrie, but I’d pay an obscene amount of money to have this in my room right now. 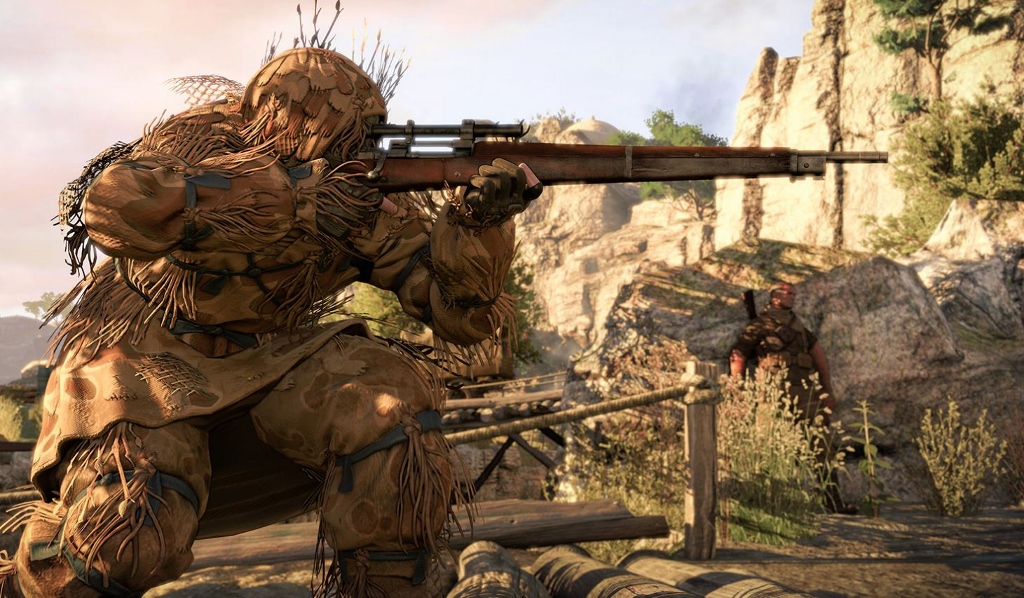 I’ve been burned by too many shiny-looking demos for ultimately mediocre experiences to name anything for Best of Show that I didn’t actually play. But even with that dubious distinction, Sniper Elite III impressed me by somehow managing to deepen the existing experience while broadening its appeal for more mainstream players. Sneaking around the North African front of World War II and hunting for that perfect headshot feel as smooth as vodka with the new non-binding cover system. The capability to snipe vehicle tanks for explosive effect is something I did not expect to enjoy as much as I did. And adding new muscle layers and circuitry to the slow motion kill cams just makes the gruesome reward that much more obscenely satisfying.