Four years ago, the Electronic Entertainment Expo tradeshow in Los Angeles gave us the year of the bow, and now it’s time for another seismic shift.

As companies like Microsoft, Sony, and Electronic Arts announced their newest products this week as part of the E3 conference, the grappling hook kept showing up in demos and trailers. And it makes sense. Who doesn’t want to zoom across a map or to the top of a building without having to walk or climb? Or maybe it’s that every developer suddenly learned how to do grappling-hook physics at the same exact time — although the reason doesn’t matter when the wind is whipping through the digital hair of my video game characters.

So go dig your utility belt out of the closet, and let’s strap some of these grappling hook-loving games to your waist:

Call of Duty: Infinite Warfare takes the series into a sci-fi future of space combat and microgravity Players must navigate zero-G environments, and that’s where the trusty grappling hook saves the day.

Activision showed off a space battle from Infinite Warfare, and it demonstrated how players could get around using the grappling hook when running across the hull of a ship.

The original Titanfall gave players plenty of options for mobility, but Titanfall 2 is getting a way to zip around maps in addition to running on walls and ejecting out of titans. The grappling hook in Titanfall 2 lets you speed over to wherever you attach it. You can also use it to drag enemies toward you. In a trailer at E3, Respawn showed a player flying up and over an opponent’s titan by grappling it and then detaching it at the exact right moment in order to land on their own giant walking tank. It was hot.

What’s frightening about this is that it’s a weapon you can equip or replace with something else. But I cannot imagine choosing anything else in this, the year of the grappling hook.

I know what you’re asking yourself: What’s the point of virtual reality if I don’t get to use a grappling hook? Well, the PlayStation VR exclusive Batman Arkham VR has your back.

I gave this Bruce Wayne simulator a spin. It has you dressing up as the Dark Knight before going out to solve the murder of Nightwing. As you don the cape and cowl, you also get to calibrate your grappling hook. Unfortunately, in the demo I played, I could only use the grappling hook at the very end of the play session.

Above: Get over here, please.

Bethesda had a lot to show off from Dishonored 2, and that includes a new tentacle power for one of the playable characters that functions as a grappling hook. But this doesn’t always mean helping you get around a world — sometimes it can serve important functions in combat.

For example, Dishonored 2’s grappling hook basically turns you into Scorpion from Mortal Kombat. If you upgrade it enough, it can reach out and then drag enemies toward you for a close-up kill.

The big thing about grappling hooks is that they can only really take you from point A to point B. But what if you could attach it to a little robot guy that can drag you where you want to go?

ReCore, the new action game from Microsoft, features a mechanic where the hero can snap her hook into her robo-spider companion Seth. And then that little bot can drag her across chasms and over other obstacles. It’s the future of grappling-hook technology. 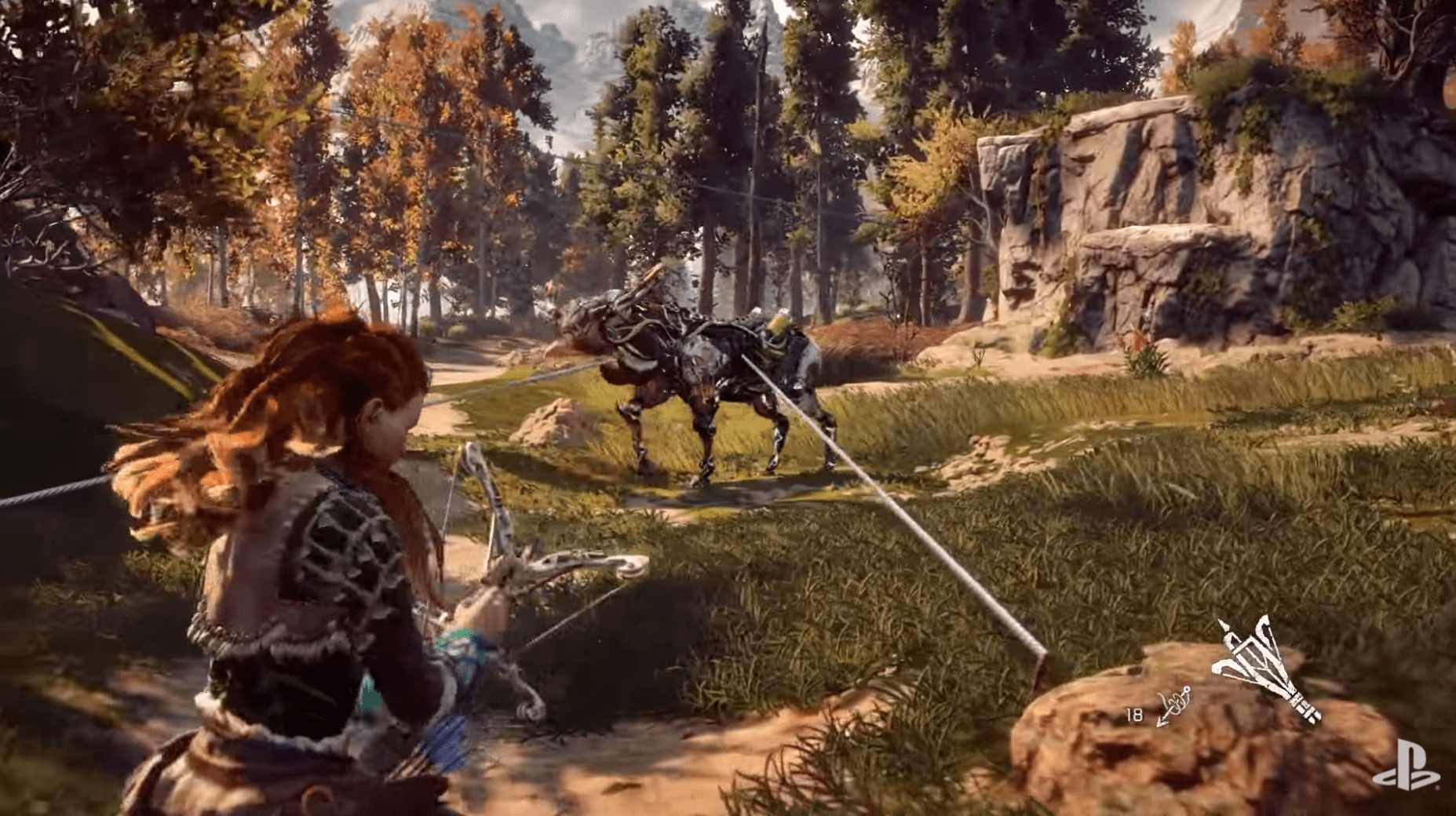 Above: The best of both worlds: a bow and a grappling hook.

In Horizon, you use the grappling hook as straps to wrestle enemies down to the ground. I tried it, and it brought a tear to my eye to see two great trends come together like this.