I am so old I can’t remember how many times I have been to the Electronic Entertainment Expo (E3). I just know I missed only a couple of them. Given that, I am uniquely qualified to tell you youngsters how to survive and enjoy the show. Pay attention, because some things have changed. It pays to be prepared, as I’m sure other elderly people tell you.

Once again the show will fill the huge Los Angeles Convention Center, with more than 200 exhibitors on the expo floor from Tuesday, June 12, until Thursday, June 14. There are more than 200 exhibitors with something like 3,250 products on display, according to Mike Gallagher, CEO of the Entertainment Software Association. More than 70 of the products have never been seen before.

The ESA is the trade group that puts on the show, and in an interview with GamesBeat, Gallagher said about 85 of the exhibitors — like Facebook, Frontier, AT&T, and AMD — are at the show for the first time. Since there are about 2.6 billion gamers in the world, and thousands of media and influencers are attending, you can actually expect billions of media impressions over the course of E3. 126 of the companies are in the mobile and social game space. 96 are in virtual reality, augmented reality, or mixed reality. 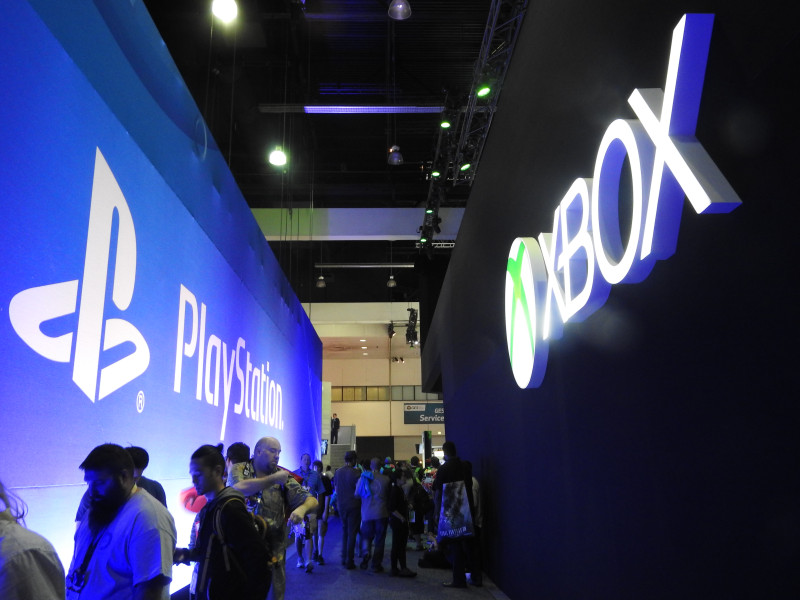 Above: The hallways are tight at E3.

Crowds: In fact, this one of the big secrets: You don’t have to go. Everything is being livestreamed, even a lot of things that are happening on the show floor. But if you must go, know that you’ll be elbowed by the 50,000 professionals attending the event, and trampled by the 15,000 fans who were lucky enough to snatch all of the tickets that went on sale to get in the show.

You must get your badge before you go, so print out your confirmation and take it with you so you can get your badge fast. Last year, the show floor was a madhouse just before opening, as lines snaked all over. I made it to my first appointment on time, but the CEO I was interviewing showed up a half-hour late. This year, fans can’t get in until a few hours later, so that should help.

Based on the feedback, the ESA extended the hours of the show floor this year and curbed hours for the Gamer Passes (consumers). Check out the schedule section below for the details. 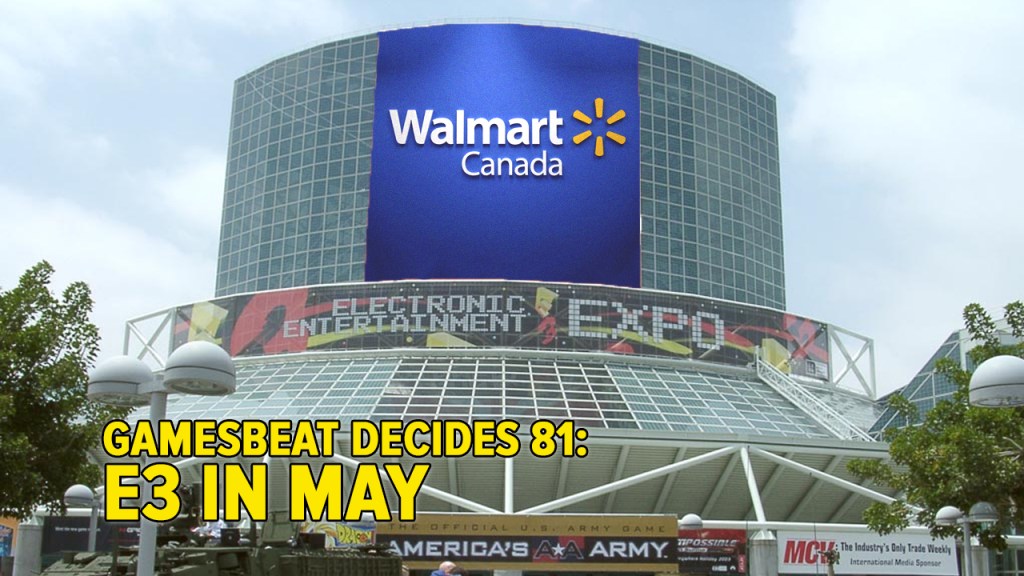 Above: The great E3 expansion is upon us.

Security: This year, security will be tight. Media and exhibitors are allowed to bring backpacks into the event, but general attendees are prohibited from doing so. Those with consumer passes can carry one small bag, no larger than 12 inches-by-15 inches-by-6 inches. Oh, and it case it wasn’t obvious, no flammable liquids, alcohol, marijuana, firearms, pepper spray, or projectile weapons. In other words, leave behind all of the gear that you have in real life that resembles stuff in video games.

“When we looked at the world climate today and talked with security experts in Los Angeles, as well as security experts from our member companies that do events around the world, we did make the decision to heighten security,” Gallagher said.

All bags will be subject to search, and everyone will have to go through metal detectors. You can pick up swag bags inside the expo, and you can take them out with you. But you cannot re-enter the show floor with swag bags. Luggage bags are not allowed, and you will need extra time to park, walk, and clear the security checkpoints.

Keep in mind you may face a line for getting your badge. Do not lose your badge. They have big goons guarding the doors who are not sympathetic, and it costs money to get a replacement badge. If you are attending events, remember to print out the bar codes that prove you are registered to attend.

Getting around: For Southwest Airlines flights, try to check in exactly 24 hours ahead of boarding. Check in your baggage if you don’t have to get anywhere fast. Be prepared for long cab lines or rental car check-in lines.

When you return to the airport, give yourself time: 2.5 hours is not a bad target for heading out before your flight at LAX. Use ride-sharing when you can. Most rental cars are off-site at LAX, so allow extra time for returns and shuttles.

For the first year, I’m going to rely on ride-sharing apps to get around. The hassle of parking in downtown Los Angeles and the cost of parking just isn’t worth the benefit of having your own car on the open road.

A little tip for getting around: When you’re walking through the concourse area between the big halls, go upstairs. Nobody walks up there, and there’s a parallel walkway to get you from West Hall to the South Hall. 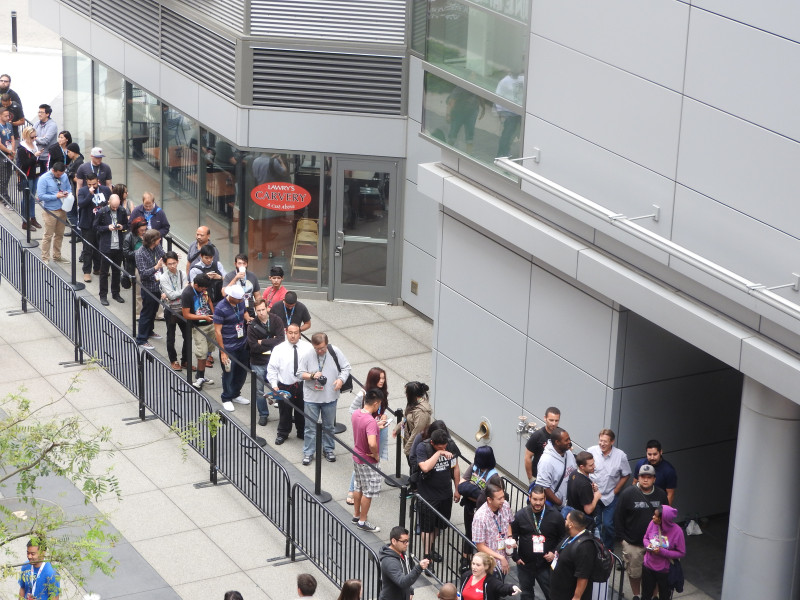 Above: E3 is full of lines.

What to pack: Bring good shoes. You’ll be on your feet for hours, so you want to make sure to have good shoes. Bring spares in case you find that what you thought was comfortable isn’t. Pack some ibuprofen and vitamins, too, along with water and snacks. I also use a roller for my backpack to save me from wearing a heavy load for 14 hours. (Of course, most people are not allowed to use these anymore).

If you collect a lot of swag, you can send it home via shipping services instead of carting it on the plane. You should print a map of the exhibit floor or rip one out of the show guide. Print out your paper calendar in case you (horrors) lose your phone or run out of power. Bring your battery pack boosters too.

Avoid shaking hands to escape the E3 flu. Drink lots of water and bring chargers. Maybe even a surge protector if you can fit it in your suitcase. Get some sleep — you really don’t have to party every night. Your best bet for good food is outside the expo.

Appointments: Remember to get the cell contact of the person you are meeting with. Booth receptionists are always busy and it takes time to check in. Either arrive early or be prepared for a shorter-than-expected meeting. You’ll need cell contacts in case anyone surprises you with a meeting cancellation. This happens a lot. Try to do all of your appointments in one big hall on one day. There’s the big West (where the platform companies are) and South halls, and the Concourse Hall that connects them.

Schedule your appointments in locations that are near each other. Arrive early for keynotes because the lines are long. I would avoid the lines for the closed theaters. Getting hands-on with a game is a lot more fun than watching someone else play or watching a trailer. The latter is what you get in a theater.

Parking: Well, I’m not sure what I can say about this except get there early, and be wary of the traffic around the convention center. There is a lot of parking under the convention center, and there are lots in the surrounding area. As I said earlier, if you can get away without driving, ride-sharing is a real alternative.

Social: Snap pictures. Share them. Your friends will be envious. Don’t do anything criminal, because you’ll be caught on camera by somebody else. If you’re interested in parties, here’s the list for that. Make sure you have RSVPs and have proof if you want to make sure you get in. 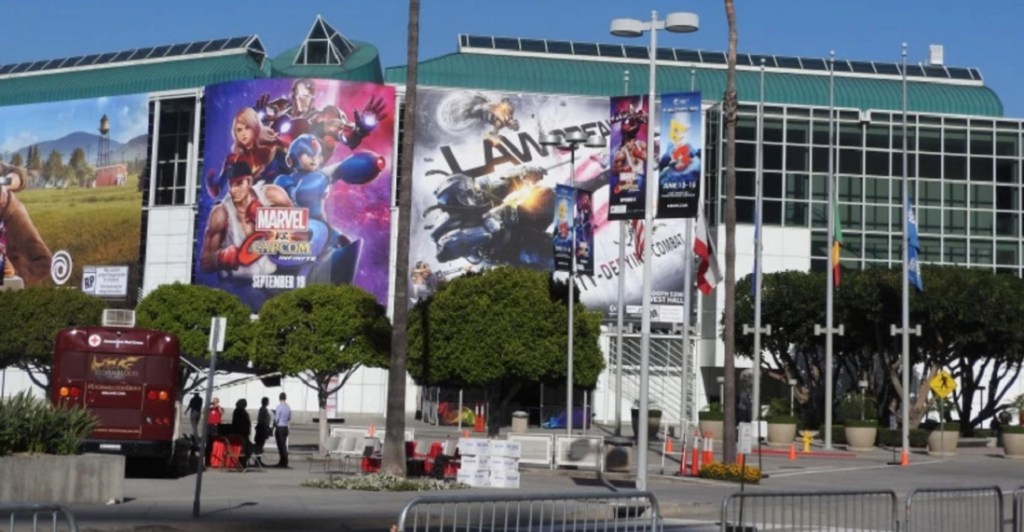 Here’s when many of the announcements will be confirmed or broadcast for the first time. 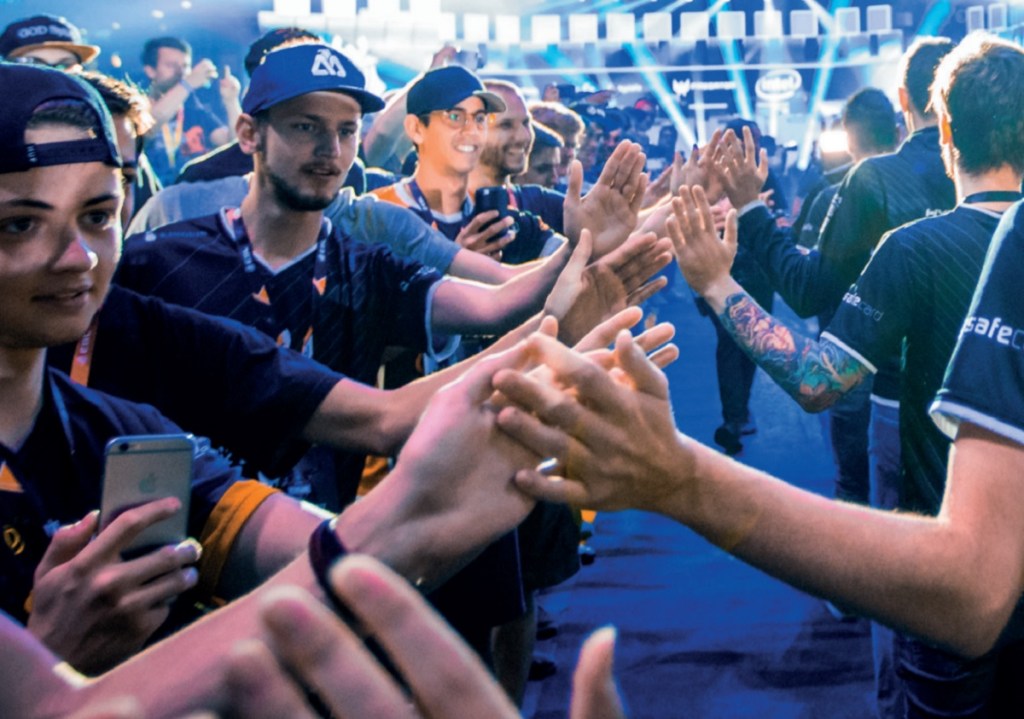 The ESA partnered with ESL to host an esports competition at the E3 ESL Arena. It runs June 12 to June 14. The arena in the South Hall can seat more than 200 employees and will feature “custom player experiences.” One of the games being played is Tencent’s Arena of Valor.

Epic Games will host its first Fortnite Celebrity Pro Am tournament with 50 pro players and 50 celebrities, paired up in duos. The players include Tyler “Ninja” Blevins, Markiplier, Ali ‘Myth’ Kabbani, Joel McHale, Xavier Woods, and Tyron Woodley. It takes place at 330 p.m. on June 12 at the Fortnite booth in the South Hall. Duos will compete for a $1 million charity prize.

Shacknews is also holding its Shacknews World Championship at the Shacknews booth in the West Hall. Sign-ups are on June 12 and the competition runs on June 13 and June 14. The event will also be streamed on the Shacknews Twitch channel. The prize pool is $50,000.

Electronic Arts has its livestream press event from 11 a.m to 12:30 p.m. The fan fest is a rogue event that takes place outside of E3. It will run June 9 to June 11 at the Hollywood Palladium. Fans will get to play Battlefield V, Star Wars: Battlefront II, new EA Sports games, and get a look at Anthem. EA will have a few unannounced titles at this event, as well as its mobile games.

Microsoft will hold its Xbox briefing at 1 p.m. Hopefully, Crackdown 3 will show its face, as it was first shown in 2014 and it was supposed to come out in 2016. Gears of War 5 is expected, thanks to the infamous leak by Walmart Canada. I’m hoping to catch a glimpse of Halo 6 as well.

Bethesda will start its announcement event at 6:30 p.m. Sunday. Bethesda gave us a glimpse of Fallout 76 already, and it has confirmed Rage 2 will be at the show. Maybe we’ll also see a new Arkane project and Elder Scrolls Online updates. 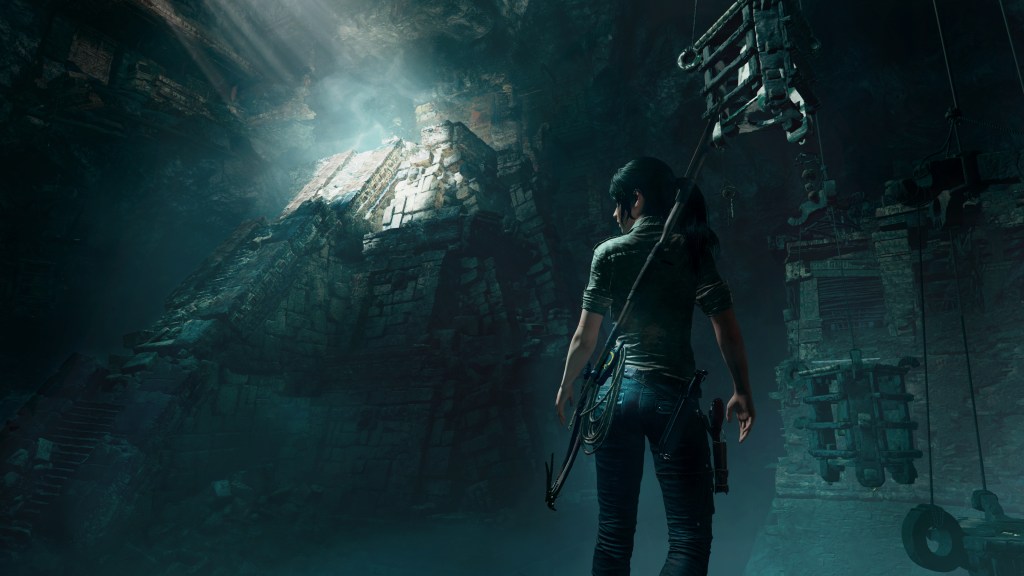 Square Enix will host a broadcast event at 10 a.m. on Monday, and we expect it to talk about its previously mentioned games like Shadow of the Tomb Raider, Kingdom Hearts 3, and, let us hope, Final Fantasy VII Remake.

The PC gaming show will take place at 3 p.m. on Monday, with a wide variety of game publishers, hardware companies, and indie devs making appearances.

Ubisoft has its press briefing at 1 p.m. on Monday. Thanks to leaks and announcements, we know we’ll see Assassin’s Creed Odyssey, The Crew 2, Tom Clancy’s The Division 2, Skull and Bones, Beyond Good and Evil 2, Starlink: Battle for Atlas, and maybe a new Tom Clancy’s Splinter Cell game.

Sony will hold its briefing at 6 p.m. We’ll likely see Death Stranding, the new game from Hideo Kojima; Marvel’s Spider-Man from Insomniac Games; The Last of Us Part 2; Ghost of Tsushima; Days Gone; Dreams; and no new hardware. Sony is also likely to show off titles such as Red Dead Redemption 2, Destiny 2, and Call of Duty: Black Ops 4. 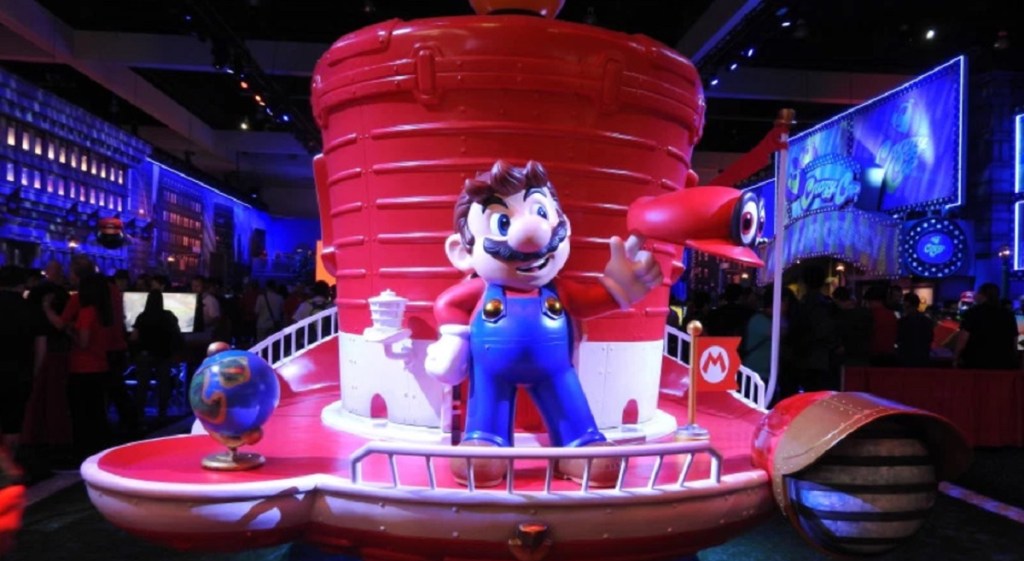 Nintendo will be the last to unveil its slate before the show floor opens. The Nintendo Direct broadcast will happen at 10 a.m. to 11 a.m. on Tuesday. Don’t try to show up at this one, as it is an online-only event. We expect to see Super Smash Bros. for the Nintendo Switch, as well as the recently announced Let’s Go Pikachu! and Let’s Go Eevee! Pokemon games for the Switch. We can also expect to see Mario Tennis Aces, Yoshi for Switch, Bayonetta 3, Star Fox Grand Prix (perhaps), and Metroid Prime 4. Maybe Fortnite will show up too!