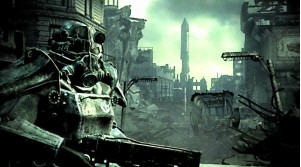 “Fallout 3” by Bethesda Softworks was the first game Microsoft showed off at its Xbox 360 press conference today and the top pick in Dean Takahashi’s “most anticipated games of E3.” The game’s executive producer, Todd Howard, took some time to discuss the state of the game industry in this exclusive interview. Since graduating from Virginia’s College of William & Mary in 1994, Howard has been one of the driving forces at Bethesda Softworks, which is located just outside of Washington, D.C. He’s been a lead on the company’s best-selling “Elder Scrolls” games as well as “The Terminator: Future Shock” and “SkyNet.” His latest project, “Fallout 3,” looks to redefine the role-playing game (RPG) genre –- a genre that “Elder Scrolls IV: Oblivion” pushed in new directions and received critical and commercial success in. Howard also serves as executive producer of the “Elder Scrolls” franchise.

VB: What’s the role of big game franchises today in the game industry?

TH: I see a lot of developers and publishers really trying to milk their franchises. I can’t say whether that’s good or bad because some of them are doing it really successfully in terms of giving fans what they really like. For example, I’m a nut for “NCAA Football” and I don’t buy that thing every year and I think they do a great job. There are other games, too, where I look at them and say, “That’s the same. I don’t want to do that every year.” I think it’s good for people to miss things. Ten years between “Fallout” is a bit long, but I think there’s this nostalgia factor. People like seeing something, at least I do, being redone again like, “Oh, I remember that, and now look at it.” If there was a new “Fallout” every other year, this wouldn’t have the same impact. Even with our “Elder Scrolls” stuff, which take a long time to make, we don’t rush sequels out. I think franchise fatigue can set in with consumers and sometimes with developers, as well.

VB: What is a good timeframe for “Fallout.” Would you wait another 10 years for “Fallout 4”?

TH: No, that’s too long. I think it depends on the game. Sometimes you just know that the time is right. If they’re big games, I think three years is a good timeframe. But at the same time, the “GTAs” on the PS2 were big games. “GTA III” came out and “Vice City” came out 10 months later and I liked that game more. You can argue both sides of it. I think for us, we’d rather take our time with them and let people miss the last one or forget the other one a little bit, because we also like to change things a lot.

VB: Based on the success that “Grand Theft Auto IV” has had and the anticipated success of “Metal Gear Solid 4,” both of which shipped outside the traditional holiday window, do you see a shift going on where a “Fallout” wouldn’t come out during the fall?

TH: We’re definitely coming out in the fall because that’s when we’re finishing. But I think a big game can succeed any time you ship it. “Oblivion” shipped in March and “Morrowinds” shipped in June. We did really well with those games.

VB: What impact does shipping a game during the crowded holiday time frame have on things with a big game?

TH: We don’t really think about it a lot. For “Fallout 3,” it has enough attention that if we just take care of our own and do a good job, things will fall right. If we start tying to maneuver around people it starts to complicate things. We need to take care of ourselves. I think it can be difficult for a lot of games, but at the same time, if you look at the sales data, it still shocks me how many games ship in November and December. And that’s not just a lot of games coming out. It’s the holidays and people love to get videogames as presents. The sweet spot is how much they cost; a lot of people can just tickle little Johnny with a game. I think each publisher and developer has to decide for themselves where they are development-wise. Most of the time I think a game that’s made really well — if word gets out about it — is going to succeed whenever, even if it’s crowded or even if it’s July.

VB: I understand that most of the new information on the game will be revealed at E3, but from a big picture perspective, what were your goals going into “Fallout 3”?

TH: We really liked the early “Fallout” games, and we thought that world was so awesome. We loved its whole retro 1950s shtick, where everything’s been destroyed and everyone’s close to death and there are super mutants and crazy weapons, but the people are still brushing their hair like June Cleaver or something. We thought that world mixed with the technology we have and the way we make our games, it was a world that we felt no one had ever played in. You could get up close to it. We tried to branch out and do a different style of game than we had done before. We do some things with really crazy combat.

TH: A lot of the tech in D.C. is government contracting like missiles and bombs and things like that. We have an office in Hunt Valley, M.D., which is where (game pioneer) Microprose used to be, and that has a number of game development studios there. I think what has happened is that if you look at where the big development centers were 10 or 20 years ago, that’s where studios have sprouted up. (Now-shuttered game studio) Origin Systems was in Austin, and that’s a great game development city that continues to grow. In D.C., there never really was game development. On one hand, people in the D.C. area who want to make games are with us. But on the other hand, it does get hard to try to draw the more experienced talent to where we are. It’s just a fact of life.