The GamesBeat team has returned from the Electronic Entertainment Expo with minimal casualties. Unfortunately, we’re going to have to change our motto from “leave no man behind” to “leave no more than three men behind in West Hollywood at 3 a.m. and don’t ever talk about this.”

We saw some messed up stuff at the Los Angeles trade show, man. We were horrified to find dudes in 20-year-old Sonic t-shirts, a cubic ton of crossbows, and “We Are Young” by that one band playing on repeat in every booth. It was a lot to deal with. Instead of running to safety, like any well-adjusted human would, we handed out awards to celebrate all of the weird. 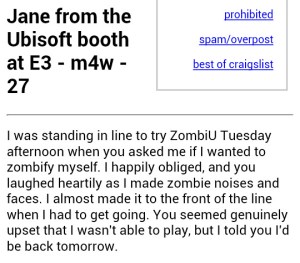 The Most Charming Booth Babe award: “Jane” from Ubisoft

Oh, Jane. You broke my heart. This hard-working lady laughed at my jokes. She ignored my body odor. Her eyes sparkled every morning when I was waiting for her in the ZombiU booth. Although, I’ve been told that I can’t read facial expressions, so that sparkling could have been her silently screaming for help. No way to know for sure.

I wasn’t the only one to fall under her spell. Jane apparently ensnared one fellow so desperately that he took to posting a Craigslist advertisement to find her. I’ll let this love-sick man explain our affections for Jane: “Maybe it’s your dark, flowing hair, your ready smile, your toned, tan little body, your playful laugh, your personable demeanor, or something that simply can’t be quantified…I don’t know!” Me neither, buddy. –Jeff Grubb

The Biggest Group of Sheep award: Everyone who gathered in a giant crowd to watch a Call of Duty: Black Ops 2 trailer

Activision adorned the front of its gigantic booth with a very, very wide screen. In the middle of this display was a counter, and when it reached zero, all traffic in that area of the show floor would stop and almost a hundred people would stand around to watch a trailer for Black Ops 2. A trailer! They’re at E3! They can play unreleased games, but instead they’re going to watch a trailer! Just go on YouTube when you get home or something! –Mike Minotti

Press conference most likely to get you fired: Ubisoft 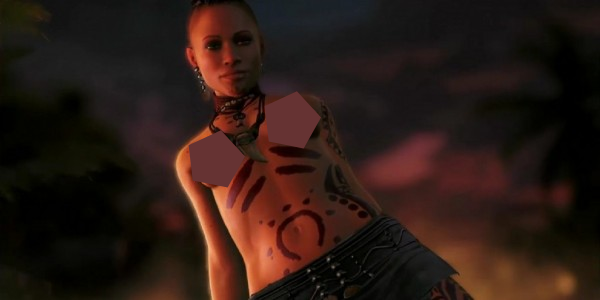 If you’re not one of the super-special journalists invited to the major E3 press conferences, chances are you’re watching remotely. This year, each company seemed determined to out do one another with adult themes, and Ubisoft definitely wins. When the infamous Far Cry 3 trailer (you know, the one with the shirtless woman) popped up on-screen I was actually at my other job. Yeah, Ubisoft nearly got me fired. – Jasmine Rea

The Most Overused Motivation Award: Revenge

Game creators used the word “revenge” in the taglines and trailers for a lot of titles this year, including Dishonored (“Revenge solves everything”) and the four player co-op mode for Far Cry 3 (featuring four characters who are looking for…yup, revenge). And then we have Metal Gear Rising: Revengeance. I’m not sure exactly what “revengeance” is, but I’m assuming it’s a lot like revenge (which is the cheapest and easiest form of character motivation a writer can possible employ). –Mike Minotti

Nintendo of America president Reggie Fils-Aime took an opportunity during this year’s press event to take ownership of his meme-spawning line from E3 2007. During the Wii U maker’s press briefing, Fils-Aime reminded us all that he had uttered that sentence, seemingly in an attempt to reconcile himself with the .gif makers who have been laughing at him for five years. It was an endearing moment of self-deprecation…that the subsequent awkward Wii Fit U video immediately ruined. –Evan Killham

Peter Ong, director of Epic Mickey: Power of Illusions for the 3DS, was quick to praise my amazing platforming skills during my demo of his 2D side-scroller. Now, I am pretty awesome at video games, so I can’t blame him for being stunned at my incredible ability to bounce off of enemy heads. Still, I guess it is possible he was just buttering me up so I would be kind to his game. Naw, I’m probably just that awesome. –Mike Minotti

The Carpet That Most Felt Like It Was Making Love to Our Feet: Gree

Folks, E3 hurts. You spend three days standing when you’re not walking and walking when you’re not running. Mid-way through day two, your feet experience the kind of sensation that makes you consider amputation as a viable option. But when I happened to cross over the Gree booth on the show floor, it felt like walking on clouds made of whipped cream. I’ve walked barefoot on grassy hills that didn’t feel as wonderful as that amazingly plush, cushy, off-white masterpiece. Seriously. I’ve got hardwood floors in my house. I love having hardwood floors in my house. And I still want whoever put down that flooring to come into my home and carpet everything, including the walls and ceilings. –Rus McLaughlin

The Cutest Piece of E3 Swag: The Neverwinter Dragon Hat
T-shirts. Baseball caps. iPhone cases. PR reps love to hand out promotional swag during E3, but Neverwinter publisher Perfect World Entertainment cranked the “d’awwwww” up to 11 this year with its knit, tasseled dragon hat. I’ve received a lot of compliments on it at work, including, “What the hell is that thing on your head?” and “I need to see you in my office.”  –Stefanie Fogel

The Greatest Threat to the Uncanny Valley award: Beyond: Two Souls (PS3)

It’s hard to believe, but real-time facial animations are starting to make games like Mass Effect and L.A. Noire look outdated. The creepy uncanny valley is starting to go away, soon to be replaced by another creepy phenomenon: that game characters are starting to look an awful lot like real people. –Dan “Shoe” Hsu

I’ve heard from people who were there that Wonderbook will provide hours of entertainment and learning for people far younger than I can remember being. Unfortunately, I didn’t get that impression after Sony’s eight-and-a-half-minute-long demonstration of the augmented-reality platform brought the entire show to a screeching halt. Eight and a half minutes is a long time, especially at a trade show at which Microsoft presented a product that makes watching a movie just one thing you’re doing. –Evan Killham

In the Assassin’s Creed III trailer, the newest assassin character Connor, is such an acrobatic combat master that he charges a whole British troop formation in pursuit of a target. Connor charges past the line of bayonets and muskets, hurtling past red coats until he finds the leader to dispatch. In a real playable scene, Connor blows up a gunpowder barrel and then takes out a few soldiers in a frontal assault on the way to a fine assassination as he leaps from a fort structure onto the back of his target. Who needs stealth when you can take out a whole army with one assassin? –Dean Takahashi

During Ubisoft’s press conference, emcee/actress/comedian Aisha Tyler gave us this gem after seeing some exciting demos: “Let’s play a game entitled ‘How many times Aisha gets girl-wood during this presentation.’ We’re up to two.” There’s plenty more where that came from. –Dan “Shoe” Hsu

Year of the Bow Award for the Most Bows: Ubisoft.

In a year where every game seemed to bring a bow/crossbow to the party, Ubi really pulled out all the stops to take this one home. Assassin’s Creed 3. Far Cry 3. Splinter Cell: Blacklist. ZombiU. For all we know, Just Dance 4 has a move called “The Archer.” Well played, Ubisoft. Well played. –Rus McLaughlin

In the 16 years I’ve been attending E3, I’ve never seen a new, non-sequel game get this level of reception after it debuted at a press conference. Ubisoft’s Watch Dogs genuinely wowed the audience with its absolutely stunning modern world with a slight cyberpunk flair, brutal and stylish combat, and hack-everything gameplay. I can’t wait to see more. –Dan “Shoe” Hsu

The You Couldn’t Have Made One of These a Kirby Game or Something? award: Nintendo

Between New Super Mario Bros. U, New Super Mario Bros. 2, Paper Mario: Sticker Star, and Luigi’s Mansion: Dark Moon, Nintendo isn’t suffering from a dearth of Mario-universe titles. Now, we’re all huge Mario fans, but isn’t this a bit of overkill? Maybe the guys back in Kyoto could tap into the vast library of characters and mix it up a bit with Kirby or the Ice Climbers or something. –Jeff Grubb

In the recent past, a lot of games were hopping on the space-marine, zombies, or first-person-shooter bandwagons. This year, it’s all about new climbing and scaling moves (Splinter Cell: Blacklist, God of War: Ascension) and bows or crossbows (Tomb Raider, Blacklist). And that’s just a tiny sampling! –Dan “Shoe” Hsu

I’m beginning to think that the horrifyingly awkward Ubisoft briefing was all an elaborate plan to keep us confused and off-guard to maximize the impact of the Watch Dogs announcement at the end. There we were, all ready to leave (or turn off the livestream) and wash our hands of this whole ordeal, but Ubisoft had one more thing to show. “Fine,” we thought. “Let’s get this over with.”

And that is when Watch Dogs melted our goddamned faces off.

It didn’t happen immediately; that wouldn’t be enough of a mindjack. What we got first was a reaaaaaallly loooooooooong video about digital footprints and other lines that the Wachowski brothers cut out of The Matrix for being too pretentious. That’s when the awesome gameplay footage started, and we were like, “HOLYSHITTHISISAMAZING,” and we stayed that way until the hero drove off, and the camera pulled back to reveal a second character who had what appeared to be an online handle floating over his head. I don’t remember what happened after that because I was trying to figure out how that gameplay we’d just seen would work in online multiplayer, and what that would mean for everything, that I blacked out for about 10 minutes before waking up in a puddle of Mountain Dew. I hope. –Evan Killham

With a massive E3 booth (complete with a bar right in the middle), a ritzy after-show party with popular mash-up artist Girl Talk as the main attraction, and, of course, a huge hiring spree over the past few months in Silicon Valley, mobile publisher Gree seems to have plenty of moolah to toss around. We’re willing to bet that conversations in its check-writing department typically end with, “Go ahead and add a couple of zeros to the end of that figure.” –Dan “Shoe” Hsu

This cup is given in memory of Mr. Caffeine who spoke so ineloquently at the Ubisoft press briefing in 2011.

Ubisoft had a wonderful E3 press briefing this year, but that was in spite of a man named Toby Turner (or Tobuscus on Youtube). Comedian Aisha Tyler handled the hosting duties for the French publisher’s E3 event, while Toby stood backstage with a camera and made bad joke after bad joke. His banter with Tyler, which was apparently supposed to be playful, seemed to genuinely annoy the host. No one has seen Toby since, and witnesses claim Tyler sprinted away covered in blood. Don’t worry, Aisha, we’re on your side in this. –Jeff Grubb 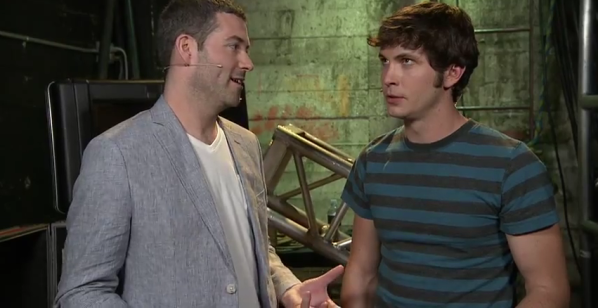 Get more E3 coverage from our hub page.