When Ken Moss interviewed at Electronic Arts for the chief technology officer, he talked to 14 people. They were nervous about bringing in someone from outside the game industry, but they eventually got comfortable and hired him in 2014. It helped that he was a lifelong gamer.

Now Moss manages teams spread around the world who provide the central technology services behind EA’s games. He is in charge of the teams that make the Frostbite game engine, which is used across EA on games such as Battlefield and Madden NFL. Moss also supervises the security in games as well as the Origin digital services network and cloud technology. The central tech team has 1,000 people who work closely with other studios. Moss spoke in a fireside chat with Mike Vorhaus, president of Magid Advisors, about the future of games at our GamesBeat Summit 2018 conference.

“We’ve been growing our central tech over the years as we see this digital transformation taking place and as we’ve been getting traction,” Moss said. “Now that Frostbite is powering all of our HD games, and our services are integrated, we are getting great leverage. We have been able to expand and get wins across the board.”

But in contrast to other companies, the research on new innovative tech isn’t restricted to Moss’ operation alone. Rather, it’s spread out across the company. But Moss has his opinions on new technologies such as augmented reality and virtual reality. He thinks they will both be transformative, but “we are early in the industry journey.” 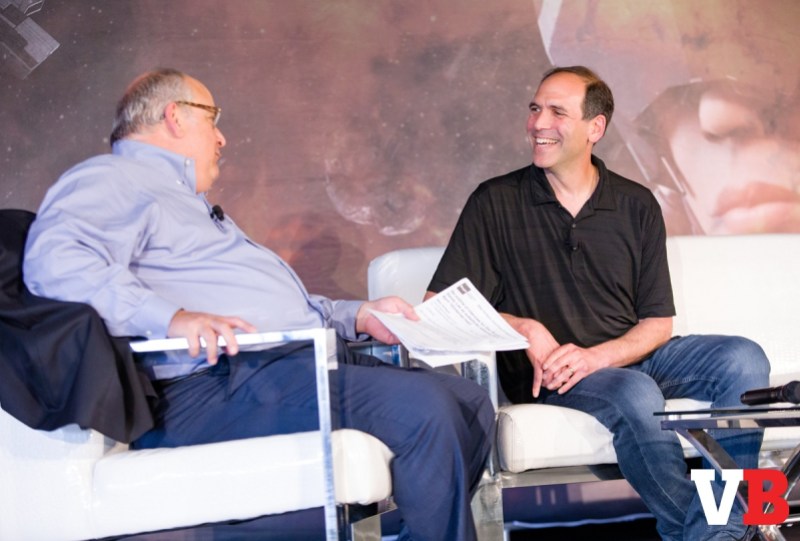 Above: Mike Vorhaus of Magid Advisors and Ken Moss of EA at GamesBeat Summit 2018.

He added, “I can’t help but picture a world with fewer screens mounted on walls and on phones we carry around in our pockets. If I want to have a screen pop up, I’d like to just have a screen pop up. Does it have to be digital or physical? Maybe I don’t have to know the difference. As we think about an AR future, far into the future, we see a need to have realistic renderings. I picture a world where screens are much more dynamic.”

Moss think’s about CEO Andrew Wilson’s vision to add another billion gamers to the 2.6 billion who already play games. What are the technologies that will be needed to enable those gamers to get better connected? Moss believes both artificial intelligence and the cloud will be huge opportunities in making sure games are available, secure, and fun to play. AI is learning how to play Battlefield multiplayer matches to make sure the levels are balanced.

“When we make some of our big games, they get harder to test,” Moss said. “How do we get quality? It’s incredibly important. We’ve been doing more and more with automated testing. Automated testing isn’t new, but using AI to do it is new. That’s just the beginning for AI. It’s opening up all sorts of new avenues. We like to say gaming will change more in the next five years than it has in the last 45.”

He also said EA is paying a lot of attention to blockchain to figure out how it will impact games.

Check out the video to hear Moss’ view of gaming’s future.