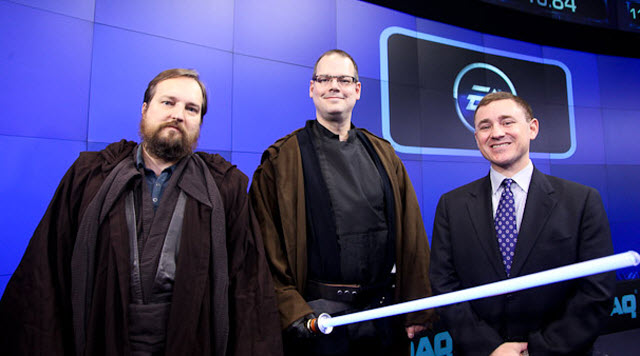 Electronic Arts has officially launched Star Wars: The Old Republic, one of the most expensive online games ever made, in a bid to grab a share of the lucrative massively multiplayer online games market that is dominated by Blizzard Entertainment’s World of Warcraft.

Electronic Arts executive and BioWare c0-founder Ray Muzyka (pictured center), co-founder Greg Zeschuk (left) and EA executive Frank Gibeau (right) rang the opening bell on the Nasdaq Stock Market today. In an interview with VentureBeat, Gibeau said the launch is going well, and, knock on wood, there are no hordes of angry players expressing their rage on Twitter.

“Our infrastructure is doing well,” Gibeau said. “We’ve had a pretty good experience so far.”

Analysts have said that as many as 1.5 million players may already be playing the game, which became available to beta players on Dec. 13. But Gibeau said he could not confirm that due to an earnings quiet period, “otherwise I will be wearing an orange jumpsuit.”

In our review, Henrich Lenhardt played the early version of the game for more than 40 hours and thought highly enough of the early experience to rate it 89 out of 100. The game takes place thousands of years before the time of the Star Wars movies and allows players to play as Jedi Knights, other characters from the Republic, or evil Sith.

The Old Republic, which has been in the making for more than five years, was a major reason why the publisher purchased development studio BioWare (and the now defunct Pandemic) for $860 million in 2007. The game’s budget is reportedly in the range of $100 million to $200 million. The payoff could, however, be substantial, as users must shell out a monthly subscription fee ($12.99 – $14.99 depending on the term length) if they want to continue playing, as the $60 game comes with just one month of included server access.

“It is certainly EA’s most ambitious project to date,” Gibeau said.

Electronic Arts chief executive John Riccitiello stated that the game would be on a path to profits with half a million subscribers, a modest number in light of World of Warcraft’s 10.3 million players. He said that the game needed 1 million subscribers to be nicely profitable. If Electronic Arts gets 1.5 million to 2 million subscribers, it will be enough to “make it look like a great investment and justify the purchase of BioWare Pandemic, Riccitiello said. The high-end numbers may seem overly ambitious, but in the past year, World of Warcraft has lost around 1.7 million paying subscribers, leaving plenty of former Warcraft fans ripe for the picking. Gibeau said the guidance on those numbers has not changed.

Still, it’s a big gamble on a subscription business model that hasn’t worked well for most others. MMORPGs like EverQuest II, The Lord of the Rings Online and Dungeons & Dragons Online switched from mandatory subscriptions to a free-to-play model with optional in-game purchases and reportedly increased both player numbers and overall revenue. Gibeau said he saw the industry separating into two parts, premium and free-to-play. He said players have shown they will pay for premium content such as Xbox Live and other Star Wars content. One of the keys is to have enough content beyond the launch day, and Gibeauu said that BioWare has lined up considerable content for that, including multiplayer flashpoints and new player vs. player options.

Gibeau said he believes the game is going over well with fans because BioWare has artfully worked a compelling storyline into a traditional MMO. One of the big innovations is working 200,000 lines of voice-acting into the story, so that users can experience a movie-like snippet whenever then hit a key point in the story. BioWare also fashioned the game so that the choices players make really matters to the path they follow and the outcome of the game.

Beyond a big bet to make more money, the game is a major attempt to bring the Star Wars fan base into the modern age of the MMO, ensuring that George Lucas’s franchise lives on in the age of massive blockbuster games. And it is also aimed at bringing in a steady stream of revenue for Electronic Arts, elevating it and its developer, BioWare, into the stratosphere of the game industry, where respect and revenues go hand in hand.

If the game is a home run for EA, the company will enjoy a cash-generating franchise for years to come, much like its EA Sports games that generate revenues every time a new sports season comes around. And it could give EA more financial might to take on its larger rival, Activision Blizzard, and fend off challengers such as Zynga in social games and smaller rivals in smartphone and tablet games. This kind of risk-taking is almost unheard of in the game industry these days.

Gibeau said the Star Wars game was just one of many bets that EA has made to make sure it can transform itself from a packaged goods retail product company to a digital online company. Other bets include investments in social and mobile games, he said.

BioWare began working on its first MMO around five years ago, opening a new satellite studio in Austin, Texas. The developer was then majority owned by Elevation Partners, which took a majority stake in two development firms, BioWare/Pandemic, for $300 million in 2005. Elevation partner John Riccitiello was then named CEO of Electronic Arts and EA announced it would acquire BioWare/Pandemic in October 2007, with the deal closing in 2008. One of the reasons BioWare/Pandemic had doubled in value in just two years was that the then-secret online game was expected to generate a lot of revenues in the future. EA announced that both LucasArts and EA would publish the BioWare Star Wars game in October 2008. At that time, BioWare co-founders Ray Muzyka and Greg Zeschuk announced that the game has more content planned than all of BioWare’s previous games, including the 2003 title Knights of the Old Republic.

Besides setting up the studio in Texas, EA also created its Origin online game distribution service and opened a 200-employee customer service center in Galway, Ireland, to handle support calls related to the game. Gibeau said that EA’s Mythic and BioWare in Edmonton, Canada, had also contributed.