The new city-building simulation game represents the culmination of a large team of developers at EA’s Maxis and Playfish game studios, and it’s EA’s big counterattack against Zynga’s CityVille, which has 27.6 million monthly active users and is still the No. 3 game on Facebook 21 months after its launch.

The game is an interesting experiment since EA is launching a more casual version of SimCity for Facebook at the same time it’s readying its new SimCity, a more traditional, $60 PC game, for launch in 2013. EA views the titles as targeting different audiences, where SimCity Social could target a broader audience — a new generation of urban planners — that could eventually try out the $60 game. The risk, of course, is that the social game might reduce demand for the $60 title.

“SimCity Social will entice a new generation of urban planners with its easy-to-use tools that allow anyone to expand and grow their own unique sprawling metropolises and watch as it comes to life in fun and unexpected ways,” said Jami Laes, the vice president of Global Studios for Playfish. “SimCity Social is about playing with your friends. Whether you do that with kindness by helping put out a fire or through mischievous acts like helping a criminal escape, the decisions you make with your friends will determine how the story of your cities plays out.”

With SimCity Social, the player doesn’t follow a linear path. Cities evolve as a direct result of player-driven choice, allowing for more creative freedom than a game that leads you directly down a path. As mayor, the player deals with unforeseen problems like fires, crime, and pollution. The fun part of the game is making decisions to solve those issues. Players can also compete on a social level, creating friendly or competitive relationships with other cities. The Facebook game already has more than 750,000 fans.

EA plans to integrate advertiser Dunkin’ Donuts into the SimCity Social game; players can gift coffee and donut “boosts” to friends during the game. 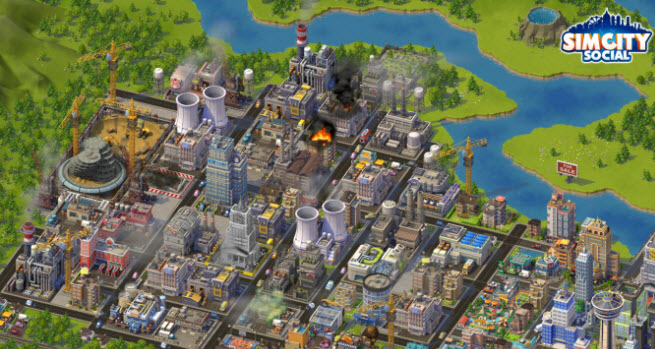