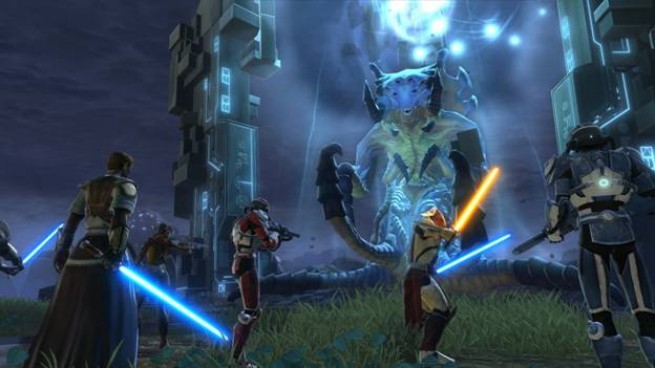 Electronic Arts announced today that it secured a multiyear deal to produce Star Wars games (as first spotted by Kotaku). EA will focus its efforts on producing big-budget titles for core gamers playing on traditional platforms.

“While we don’t have any details to share today on specific titles, our development teams are already brimming with design ideas,” EA Labels president Frank Gibeau wrote in an EA blog. “The EA Studios that will develop these games are some of the most innovative and popular creative teams in the world, and include DICE and Visceral, in addition to the BioWare team, which is already developing for the Star Wars franchise. These imaginative teams will make games that may borrow from films, but the games will be entirely original with all new stories. Powering it all will be the Frostbite 3 development engine – guaranteeing incredible graphic fidelity, environments, and characters.”

“We believe the collaboration between the creative teams at both Lucasfilm and Disney Interactive, working with the best in class development and publishing teams at EA, will take Star Wars gaming to a whole new level,” a Lucasfilm spokesperson said in a statement provided to GamesBeat. “We’re tremendously excited about the unlimited new opportunity to provide fans with Star Wars stories and experiences never before seen in the Star Wars galaxy.”

Under this deal, Disney maintains certain rights to publish Star Wars-related games on social and mobile platforms. Disney Interactive has had a lot of success on mobile with titles like Where’s My Water?

“This agreement demonstrates our commitment to creating quality game experiences that drive the popularity of the Star Wars franchise for years to come,” Disney Interactive co-president John Pleasants said in a statement. “Collaborating with one of the world’s premier game developers will allow us to bring an amazing portfolio of new Star Wars titles to our fans around the world.

Pleasants has a history with EA. In 2008, he worked as the publisher’s chief operating officer. He left in June 2009 to join social-game developer Playdom.

As EA’s Gibeau mentioned, the company has experience with the Star Wars franchise. The publisher poured million of dollars into producing the BioWare massively mulitplayer game Star Wars: The Old Republic.

That game failed to find the necessary audience for the company to maintain the game’s monthly subscription fee. It instead moved it to a free-to-play model to maintain a stronger player base.

That wasn’t enough to scare EA off of the lucrative Star Wars name. DICE, Visceral, and BioWare are arguably EA’s most important internal developers that aren’t working on a sports game. By committing those major resources to Star Wars, EA is betting big that the galaxy far, far away will make it a mountain of big, big bucks.

Finally, we asked EA if Visceral will abandon the Dead Space franchise to work on Star Wars.

EA will post its earnings results for its fiscal year. Expect new information about the timing for the Star Wars games at that time.