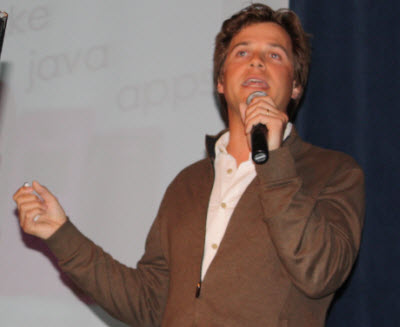 Someone is going to create a social game that pulls in a billion dollars a year in short order, said Sebastien DeHalleux, vice president of business development and strategy at EA Interactive and former chief operating officer of EA’s Playfish social game division.

Speaking at the Inside Social Apps conference in San Francisco today, DeHalleux said that hitting that milestone for the social game industry — which is only about two years old on Facebook — would be astounding. But he noted that the goal is based on a matter of simple math.

To hit $1 billion in sales in the console game industry, game franchises such as Grand Theft Auto have to sell 15 million copies at $60 each. Game franchises that have done so include FIFA soccer, Modern Warfare, Final Fantasy, the Sims, Need for Speed and others.

But to hit $1 billion in revenue with free-to-play social games, a game has to hit 100 million monthly active users who, on average, generate a little above 80 cents a month for a year. That number is achievable, based on the momentum of Facebook games to date, DeHalleux said.

Facebook has 400 million users. About half play games. Games such as Zynga’s FarmVille already have  81.4 million monthly active users, according to AppData. The big question is whether or not such games monetize well enough to generate 80 cents per user per month, considering that many players never pay at all.

With free-to-play games, a small percentage of users will pay real money for a virtual good, such as a better tractor in a farm game. That’s why conversion rates, or the percentage of paying users among total users, is key. If it’s just 1 percent of users and they pay $2.25 a month — as estimated by SecondShares in its evaluation of Zynga — then it’s a lot harder to hit the targets DeHalleux talked about. There is constant churn in social games as well, so spending on marketing eventually becomes pretty high for any game publisher trying to replace departing users with new users.

Lisa Marino, chief revenue officer at RockYou, said that a great game will monetize with 3 percent to 5 percent of users paying. Most games will monetize at 1 percent to 3 percent, she said at a panel after DeHalleux’s talk. If game companies add offers — special offers where users can sign up for deals such as a Netflix subscription — in lieu of credit card payments, they can double the number of monetized users.

The upshot: it’s fascinating to consider that DeHalleux’s prediction of the billion dollar social game is within grasp. That helps explain why EA paid as much as $400 million last fall to buy Playfish.