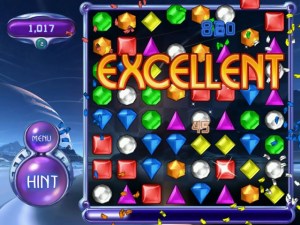 As usual, the sources are remaining anonymous, so take the rumors with a grain of salt. The purchase price is also somewhere between 10 and 20 times PopCap’s yearly revenue, which is a pretty steep price even for bold suitors. The company recently acquired the San Francisco-based social game developer ZipZapPlay and said it was planning to go public later this year as well.

PopCap is an appealing target for almost any game company because it has several extremely popular games that can be turned into franchises. The company also has a large number of regular users who purchase games, and it is expanding into social gaming with games like Bejeweled Blitz. It’s a rare company that draws gamers from all audiences — social, casual, mobile and hardcore gamers.

Zynga, which has wildly popular social games like Farmville and CityVille, is also an unlikely candidate. Zynga has also been on a spending spree — its huge user base has allowed it to buy 12 companies in 12 months. But Zynga already has 259 million monthly active users and is known for rapidly turning out new intellectual property.

“That leaves Japanese guys like DeNA and maybe a few media companies,” Bagga said. “It won’t be Disney, obviously, though there’s a chance a company like Fox might be involved.”

Japan-based DeNA, which focuses on social games and has taken aim at Zynga, has been growing at a blistering pace and could be on track to unseat Zynga as the top developer of social games for mobile devices.

PopCap’s soon-to-be customer engagement leader Jennifer Kye said the rumor was unfounded on her Twitter account. Kye said her boss confirmed to her that the company was not planning to sell to any other company for $1 billion. When contacted directly by VentureBeat, PopCap did not give any comment as to whether the rumor about the buyout was true or not.

The casual game maker reported more than $100 million in revenues last year and is one of the most successful independent game companies. Sales of Bejeweled made up about 40 percent of its revenues, and about 20 percent came from Plants vs Zombies, PopCap chief executive Dave Roberts told VentureBeat. But the company was born in 2000, long before the era of social gaming.

PopCap has 16.3 million monthly active users on Facebook. The company has 4.3 million daily active users, or those who come back once a day. It ranks No. 3 behind Zynga and Electronic Arts, according to AppData.