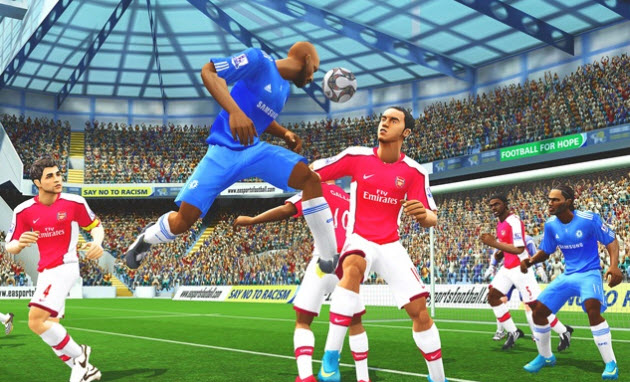 EA is one of the biggest independent makers of video games and its revenues are a good indicator for the overall industry’s health. Executives attributed the company’s better results to EA’s focus on fewer, higher-quality games.

For the first fiscal quarter ended June 30, EA reported non-GAAP revenue of $539 million, compared to its expectations of $460 million to $500 million. Its non-GAAP loss per share was 24 cents, compared to guidance for a loss of 35 cents to 40 cents a share. Analysts expected a non-GAAP loss of 35 cents and revenue of $502 million. Non-GAAP digital revenue (from online, mobile and social games) was $188 million, or 34.8 percent of total revenue. The digital revenue was up 25 percent from a year ago.

“We had a solid first quarter, exceeding expectations both top and bottom line,” said John Riccitiello, chief executive of EA. EA reaffirmed its previous guidance for its fiscal year.

Retailers ordered 3 million copies of EA’s 2010 FIFA World Cup South Africa game. (Not all of those may end up being sold to consumers.) Riccitiello said one of the stand-outs in digital game sales was Scrabble on the Apple iPad. Also contributing to digital revenues were social games, online games and iPhone games. EA had 9 of the top 10 games on the iPhone when the iPhone 4 launched, thanks in part to a strategy of offering discounts just before the iPhone 4 launched.

EA expects digital revenue — from online games such as casual games on its Pogo.com website, free-to-play online games such as Battlefield Heroes, and the EA Playfish games on Facebook, among others — are expected to grow 30 percent to $750 million in the fiscal year. That is a considerable chunk of EA’s expected $3.35 billion to $3.6 billion revenues EA expects to report on a GAAP business in the fiscal year. For the second fiscal quarter, EA expects non-GAAP revenue of $775 million to $825 million and a loss of 10 cents to 15 cents a share.

EA said it remains the No. 1 publisher on “high-definition game consoles,” meaning the PlayStation 3 and Xbox 360, with a combined 22 percent market share to date in the U.S. and Europe. In the quarter, EA’s top sellers in Western markets were 2010 FIFA World Cup South Africa, Battlefield Bad Company 2 (1 million sold-in in the quarter, after 5 million in the previous quarter), and FIFA 10.

Online, EA is moving ahead. In Korea, FIFA Online 2 has 5 million registered players, with three million unique users in July. EA closed the quarter with 7,758 employees, down 13 percent from 8,948 a year ago. EA typically loses money in off quarters and makes more revenue and profits in its third fiscal quarter, when the holidays boost game sales.

EA has 15 major games coming for the holidays, including Medal of Honor, Rock Band 3, Need for Speed Hot Pursuit, and the Sims 3 for the consoles. EA’s next big title is Madden NFL 11, which starts selling on Aug. 10. One title, Crysis 2, has been postponed until the fourth fiscal quarter ended March 31, 2011.

During the quarter, EA sold its 15 percent stake in Ubisoft, a video-game studio it had unsuccessfully sought to acquire, for a gain of $28 million. Eric Brown, chief financial officer of EA, said in a conference call that EA sees strength in the PlayStation 3 and Xbox 360 game markets. EA Playfish has 52 million monthly active users on Facebook. That number is stable, while other Facebook game companies have seen user numbers slide. EA said downloadable content on the consoles was strong with games like Dragon Age: Origins and Mass Effect 2.

EA expects digital revenues for the whole industry to grow 24 percent while traditional retail games will fall 3 percent worldwide. The net result will be a 7 percent growth in revenues for the worldwide game industry. John Schappert, chief operating officer of EA, says that the impression that the core game industry is weak is too narrowly focused on the U.S. retail game industry sales numbers, which are hurt disproportionately by weakness in music games. Retail game numbers are measured well and are declining, but digital revenues are rising and they are not necessarily captured well on a worldwide basis, Schappert said.

“In summary, we believe games are healthy,” Schappert said.