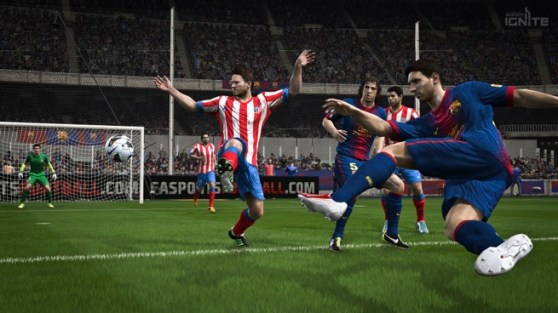 At the lab, I played versions of the upcoming FIFA 14 and Madden 25 while getting the latest on the redebut of the NBA Live basketball game and rookie-on-the-rise EA UFC release. All of these share the Ignite base. As a result, they benefit from some of the system’s most interesting new features.

A.I. for the next generation

Madden 25’s demo highlighted one of its big selling points, the War In the Trenches mode. The battle between the offensive and defensive lines is more complex than ever, with the CPU calculating multiple scenarios, leading to life-like collisions among blockers and pursuers.

In FIFA 14, multiple players now jostle for headers when an attacker crosses a ball toward the area near the goal. Defenders adjust to situations more pragmatically, too — all thanks to the improved computer control.

While the UFC game didn’t have a hands-on demo, its video presentation discussed the MMAi feature, which should give players a true challenge while highlighting the intricacies of mixed martial arts, including strategic submission battles.

While sampling the simple NBA Live 14 shootaround demo, gameplay developer Scott O’Gallagher touched on how Ignite redefines animations and motion. “Being able to change animations on the fly — that’s something we just could not really do before,” he said. “Obviously, you can see here that everything is fluid.” This development, which EA dubbed “true player motion,” became evident as I guided Cleveland Cavaliers all-star Kyrie Irving around the court.

With quick flicks of the right stick, I directed the onscreen point guard to link dribbles seamlessly. “We are releasing the ball to physics on every dribble, which then results in a realistic responsiveness. … Proper foot planting and change of direction, momentum, everything is here with the bounce step,” O’Gallagher continued. 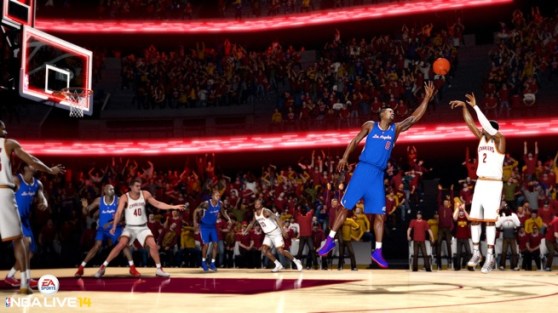 This attention to physics and movement carried over to FIFA and Madden, where the virtual players in those games moved with more realism. On-field FIFA footballers sprinted with added subtlety. Strikers avoided tackles by hopping over the feet of oncoming defenders. Players in the Madden demo galloped more like their real-life counterparts, running and cutting with increased precision.

Ignite brings upgraded visuals as well, amplifying EA Sports’ overall presentation. Uniforms ripple and deform. Madden players’ jerseys and pants accumulate grass stains and dirt with each play. Stadiums come to life with colorful fan demonstrations, and blades of grass shoot up into the air as a soccer ball rolls on the pitch during a FIFA match. 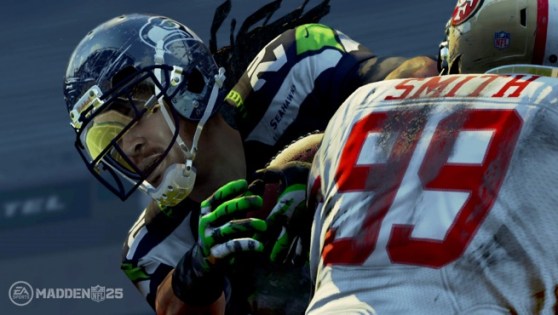 EA Sports UFC will feature fighters who bruise and cut with borderline-discomforting accuracy, and even their skin will discolor as they exert themselves.

Overall, I saw many small changes that didn’t immediately come across like revolutionary leaps. When I played a game of FIFA, it didn’t feel much different than before. But that’s not necessarily a bad thing since EA’s soccer sim is pretty damn good to begin with.

The important thing here is that Ignite is really here to unite … all of Electronic Arts’ sports franchises under one versatile system. While players will see the incremental tweaks and improvements they expect from the publisher’s yearly franchise refreshes, the new engine brings increased development efficiencies and a more consistent final product.

So from a bottom-line standpoint, it looks like Ignite is on its way to victory.