Here is a step-by-step recipe to pulling a man’s arm out of socket.

First, take him down to the ground. Next, lay on top of him in a side-control (your full body on one side of his) position. Now grab his arm. He isn’t going to like this, and he will clasp his hands together to try to stop you. Put one leg on his neck and another on his chest just below the arm. Sit up and break his grip. When his grip is broken, simply grab his arm and bring it with you as you lay back. Repeat until he taps out or passes out from the pain.

This is the type of lesson you learn in Electronic Arts Canada’s newest game: EA Sports UFC.

Mixed martial arts fans have had to wait two years for a fighting game. In that time, the Ultimate Fighting Championship has grown from one of several solid leagues to a virtually unchallenged powerhouse and box office draw. The UFC has a rabid fan base all over the world, and those fans will absolutely love the strategic combat and realistic career mode of EA Sports UFC.

Casual fans and newcomers may not enjoy it as much. The controls and the unpredictability of EA Sports UFC will bring heartbreak and rage to the average gamer, and the current state has just enough bugs to frustrate anyone — fan or not — who plays it.

An expertly crafted career mode with tons of customization options

The best part of EA Sports UFC is its fantastic career mode. Players go through a decent tutorial — which is vitally important in this game — and are thrust into the Ultimate Fighter tournament and reality show. Diehard fans will get a real kick out of participating in the popular reality show. 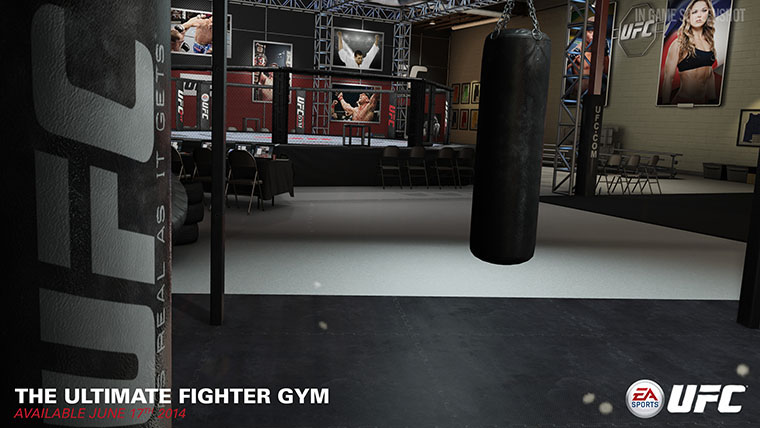 Above: A fighter’s perspective of the Ultimate Fighter gym.

Players receive encouraging or discouraging (depending on your performance in the ring) video messages from UFC President Dana White and various trainers, fighters, and retired fighters from throughout the UFC’s history. These messages evolve from light hazing when you first enter the league to praise and excitement for your first title win, which conveys a sense of inclusion in the UFC. Players feel like their created characters are actually in the league, and that is the most important part of a career mode in any game.

EA Canada mapped out the progression of created characters well. The attributes, abilities, and move choices are deep and complex without being too complicated. The options enable you to specialize your fighter in whatever way you think is best. Want to make a fat slob of a heavyweight that only executes takedowns and then lays on top of opponents? You can, and I have seen it work. How about a lightning-quick bantamweight that only tries to kick opponents in the face? Yup, that one can work too.

Some ability traits, like Vicious Kicks (improves kick damage) and Heavy Handed (improves fist damage), are inherently better than others. But that doesn’t mean you can’t fool around and have a great time in EA Sports UFC’s career mode. 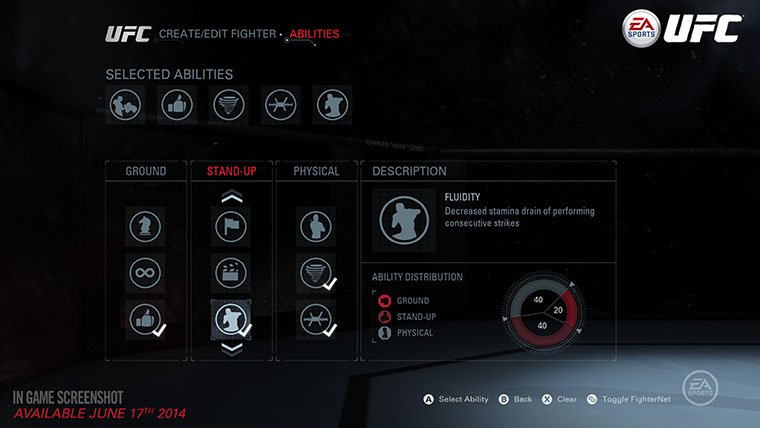 Above: A fighter selecting his five abilities.

The submission mechanic is accurate and challenging

Submission maneuvers are an important part of the UFC, and EA Canada put a lot of careful thought into how to bring these to life.

Players must master a tricky-but-not-overwhelming command system. The right stick applies pressure when attempting a submission, and it defends from one when another tries it on you. While attempting a submission, players also receive prompts to flick the left stick in a specific direction to advance to a stronger position and eventually cause the opponent to tap out.

This quick-time action system simulates that moment when the defending fighter makes a mistake, and it serves as a nice counterpoint from the rapid-fire striking that takes place when both fighters are standing. 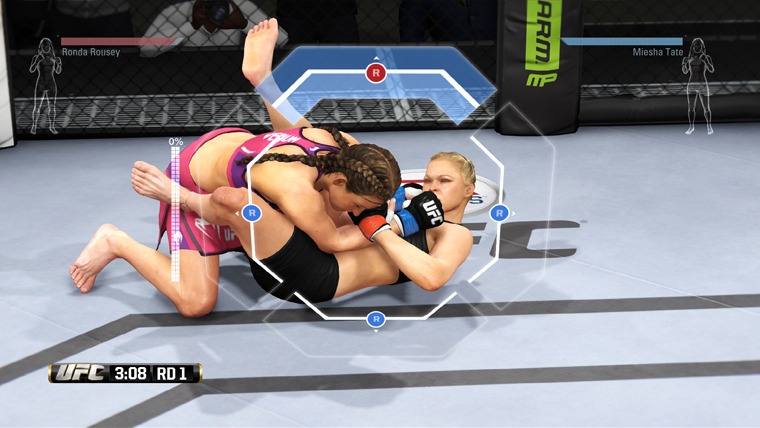 Above: The attacking submission screen shows you the controls — which are a bit frustrating.

Controls are the pitfall of all MMA games.

For years now, developers have tried and failed to create a button layout that enables a casual player to jump into a game and have fun but also permits MMA fans to pull off the kind of insane moves they see on television. The controls of EA Sports UFC are the best attempt yet, but they still aren’t quite there.

The grappling and submission controls take a while to learn. Using and defending against grappling moves requires the player to hold either L1, R1, or R2 while rotating the right stick in a quarter-circle motion in whatever direction is appropriate based on the opponent’s movements. This is difficult to master, and the mechanics are made even more complex by the fact that players have different grappling stats, so sometimes a flawless execution of a command doesn’t yield a flawless result.

This is a realistic approach to how grappling actually works in fights, but it isn’t that fun for casual players. I don’t know if this problem will ever be fixed. MMA games aren’t like other sports or fighting games where players can learn a few basic controls in 30 seconds and have a decent chance to win vs. an A.I. opponent on easy mode.

Still, if a game isn’t fun until two hours in, that’s a problem.

This happened to me often, especially in online games. I would execute complicated power kicks or punches that landed perfectly, and my opponent’s head would barely even move.

This exact move is in EA Sports UFC. I did it to an A.I. opponent, and the fighter didn’t even stagger.

The striking in EA Sports UFC is not realistic at all. Moves that would put a guy in the hospital do no damage. When you couple that with how the game also features totally random knockouts from basic strikes, it becomes clear that there is no real payoff to learning complicated punches and kicks and pulling them off perfectly.

Freezes and glitches dull the experience

EA Sports UFC will need a few patches to work out various errors, and that’s a little concerning.

In my experience with a retail copy of the game, I found that the game freezes every four or five hours. That might not be major issue, but it totally sucks to have to replay a match because your game froze right after you forced your foe into a submission. These freezes happened in loading screens, after matches, and during combat. I would share pictures and videos, but EA Sports specifically barred all reviewers from using captured screenshots and videos (that’s why we all have the same pictures in our stories).

I also encountered a few glitches in the graphics when striking and grappling. EA Canada touted its full-body deformation feature that promised realistic animations when fighters collide, seen here: 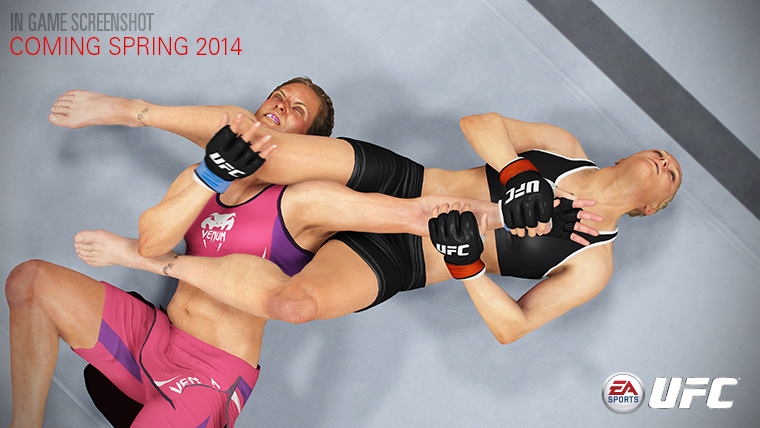 The only problem is that it doesn’t always work. In one out of every four or five of the above-pictured armbars, the defender’s arm disappears into the attacker’s groin. This hilariously unfortunate glitch is all over the place in EA Sports UFC.

A similar problem occurs sporadically when punching. Usually, the other fighter’s head contorts and their cheek pushes in from the force of the blow, which looks great. However, there are occasions where this just doesn’t happen. I have had knockout punches that look like they didn’t connect at all, even in the replays. This isn’t a huge deal, but it does subtract from what are otherwise pretty strong graphics.

EA Sports UFC is great next step for MMA games. The career mode and realistic gameplay will gain the love of diehard UFC fans and hardcore sports gamers.

However, the complicated controls and unpredictable striking mechanics will frustrate and confuse everyone else. There are also a number of bugs that need to be fixed.

This year’s EA Sports UFC is a decent offering in what could be a solid annual sports franchise if a few key issues are addressed.

EA Sports UFC is currently available on the PlayStation 4 and Xbox One. EA Sports provided GamesBeat with a retail copy of the game for the purposes of this review.